“The fountains are enough to justify a trip to Rome”, said the romantic English poet P.B. Shelley. And he was right because water and fountains have always been an essential part of the city’s artistic and cultural heritage. Monumental, scenographic, or unusual, Rome counts more than 2000 fountains: small and great treasures hiding unique stories or legends.

Here, we tell you the story of those, which are among seven of the most curious and lesser-known.

All fountains mentioned here have been designed and sculpted by Pietro Lombardi, except the Fontana della Terrina (the Fountain of the Pie Dish) and Fontana della Palla di Cannone (the Fountain of the Cannonball) created respectively by Giacomo della Porta and Annibale Lippi. Their construction was part of a plan of the Municipality of Rome, which idea was to design urban symbols to recall ancient districts, the Rioni, and disappeared crafts. The intention was also to replace the so-called nasoni, the cast iron fountains considered unaesthetic, with some more pretty fountains.

#1 The Fountain of the Books

Located on Via degli Staderari, between the Pantheon and Piazza Navona, the Fountain of the Books was built in 1927. The Staderari were the manufacturers of steelyards, the portable one-plate scales with a counterweight, who had their workshops here. The Fountain of the Books is, however, associated with the former name of the street: Via dell'Università. Here was the ancient Palazzo della Sapienza, the seat of the University, which later moved to Rione Trastevere. The fountain is enclosed in an alcove between four antique books placed on two side shelves. Among them, a deer head depicts the emblem of Rione Sant'Eustachio. The water gushes from two bookmark-shaped spouts and from the two upper tomes, to symbolize that knowledge flows relentlessly from the greatness of books. The inscription in the center, S. EVSTACCHIO – R IV, should correspond to the name and numbering of the Rione, but it is wrong since Sant' ustachio corresponds to Rione VIII and not to Rione IV.

#2 The Fountain of the Artists

Situated in Via Margutta, in Rione Campo Marzio, this fountain recalls the artistic vocation of this area. Since 1612, when the painter Gentileschi here started his studio, the neighborhood became a favorite residence for painters, sculptors, writers, and artists of all nationalities. An unusual combination of easels, masks, compasses, and stools, and a bucket of brushes and chisels of different shapes and sizes, represent the artist's tools. The two masks, one sad and one happy, on the other hand, depict his swinging mood. The water comes out from the masks and form the junction of the compasses and fills a basin from which it overflows to be collected in an iron grate.

Walking down Via della Cisterna, in the heart of the famous Rione Trastevere, you can see a strange fountain portraying a "caratello", an old word defining the barrels once used for transporting wine. This fountain symbolizes the many taverns and inns which define this neighborhood. Its water springs from the barrel into a vat. It also springs from the two one-liter jugs on the barrel sides. Caratellos and jugs were commonly used in the old Roman taverns. Did you know that each wine measure had its peculiar name? “Sospiro" and "sottovoce” (literally, “a whisper”) were a tenth of a liter, “chirichetto” a fifth of a liter, “quartino” a quarter of a liter, “fojetta” half a litre, and “Barzilai” two liters. This owes its name to Barzilai, a politician who used to campaign, offering people a two-liter wine jug.

#4 The Fountain of the Pine Cone

In Piazza San Marco, a small square adjacent to Piazza Venezia, there was a huge bronze pine cone dating from medieval times, from which derives the name of the Rione Pigna.
That pine cone was later carried to the Vatican, and now it stands, as a fountain, in the homonymous courtyard of the Vatican Palace. To recall the ancient symbol of the district, in 1927, the architect Lombardi designed a brand-new pine cone fountain. Today, it is protected by the shadow of the pine and palm trees embellishing the square, and its drinking water is available to all passers-by. Behind it, you can admire the splendid Basilica of San Marco. Amid some stylized tulip corollas, a travertine pine cone stands. Its many spouts gather in the lower basins, outlining a continuum with the sidewalk paving. Four small marble columns ideally delimit its rim.

#5 The Fountain of the Cannonball

In front of Villa Medici, the seat of the French Academy, there is an octagonal fountain, designed in the late 16th century by Annibale Lippi, on behalf of Cardinal Ferdinando de' Medici. It stands adjacent to the Pincio, one of the most charming places in Rome, from where you can enjoy an amazing view of the city. Two singular legends affect the history of this fountain. Both involving Christina, Queen of Sweden, and her arrival in Rome, after the abdication for embracing the Catholic faith. One morning of 1656, Christina was on the terrace of Castel Sant'Angelo and was late for an appointment with the painter Charles Errand in Villa Medici. She realized she would never get there in time. She decided, then, to knock on Villa Medici door in a very unique way: three cannon shots towards its door. Two balls failed, but the third one covered the long distance between the castle and the Academy, reaching its bronze door. The mark of the cannonball is still visible today. Another legend states that Queen Christina had organized a hunting trip. As she did not want to deliver the invitations, and then wait for the emissary to bring back and forth the replies, she decided to fire a cannon shot towards Villa Medici, to wake up its owner. The cannonball was preserved and placed on top of the Fountain of Trinità dei Monti. For these curious events, the fountain is today known as the Fountain of the Cannonball.

#6 The Fountain of the Tiaras

The fountain of the Tiaras, also a work by Pietro Lombardi, is located in Largo del Colonnato, along the walls of the Passetto di Borgo. A tripartite travertine basement holds three small semicircular shell-shaped basins that collect the water flowing from the spouts placed on top of three pairs of keys of St. Peter's. These are surmounted by three papal tiaras on which a fourth one stands. Among the keys, you can see the Rome coat of arms, a symbol of the power of the city, a fasces, a symbol of the State power of the time, and the papal arms. Through a clear papal iconography, the Fountain of the Tiaras also depicts the presence of the papal authority in the Rione Borgo. Although it is very close to the Vatican, it belongs to the Italian State.

#7 The Fountain of the Tureen

Commissioned by Pope Gregory XII, it bears the signature of the architect and sculptor Giacomo Della Porta, who also created the Fountain of the Turtles in Piazza Mattei, the Fountain of the Moro, and that of Neptune, in Piazza Navona. Today, it is located in front of the Chiesa Nuova, not far from Piazza Navona. Its story begins in the center of Piazza Campo de' Fiori, where it was originally located in 1595. The oval-shaped fountain was decorated with four bronze dolphins placed on the edges of the basin, the water from the Vergine aqueduct flowing from their mouths. The dolphins were originally intended for the Fountain of the Turtles but were never used. In the square, there was a crowded and picturesque market, and the fountain soon turned into a pool in which to keep cool and wash fruits and vegetables. The papal edicts were of little use, and so were the corporal punishments for offenders. In 1622, the city administration finally tried to run for cover, commissioning an unknown artist with a large travertine lid. In the same year, the dolphins were removed, and over time their trace has been lost. The big lid inevitably inspired the well-known irony of the Romans, who renamed the fountain "Pasticcio" (a mess) and then Terrina, due to its resemblance to a large tureen. The Tureen had great popularity on the occasion of recurring celebrations when instead of water, the best Castelli white and red wine gushed from its spouts. Today, the Fountain of the Tureen almost escapes the attention of passers-by, as well as the singular inscription that the anonymous creator carved on its lid. It is essentially a philosophical reminder: “Ama Dio e non fallire, fa del bene e lassa dire. MDCXXII“ (Love God and do not fail, do good deeds and let others talk. MDCXXII). 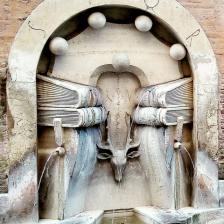 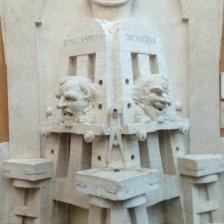 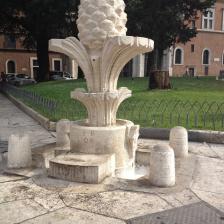 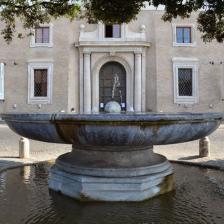 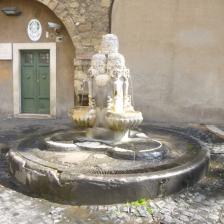 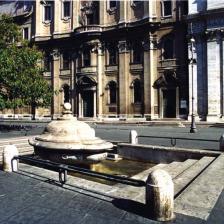