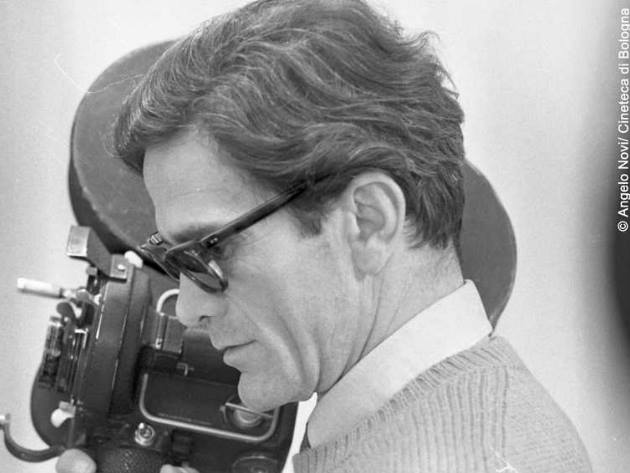 Pier Paolo Pasolini was born in Bologna in 1922. During his childhood he moved to different places due to his father’s job. In 1950 he settled in Rome, which would become his adopted city, initially living in Ponte Milvio district. In 1954 he moved to Monteverde district, first living in via Fonteiana, 8 and then in via Carini, 45, where he met Bertolucci family. From 1963 until his death Pasolini lived in Eur district, in via Eufrare, 9.

Eclectic and versatile, he embodied the suffered political and cultural changes of the 20th century and became one of its most complete and productive artists. He was interested in any kind of art, relentless in experimenting technics and languages, he was poet, writer, journalist, director, scriptwriter, translator and playwright. Admired and rewarded several times, Pasolini was bitterly criticized and subjected to trials for his unconventional ideas and critics against the middle-class and the class system. Conscious of the poor, he depicted the painful aspect of life of the lower classes, selecting common people as actors, whose faces could show how exhausting the daily life was. He was keen on dialects, an expressive form of language full of meanings. In the ‘50s he started working as movie director, scriptwriter and screen player, and then as assistant director to Fellini and Bertolucci.

His first movies had a great success, like Accattone (1961) and Mamma Roma (1962), played by the unforgettable Anna Magnani and screened for the first time at the international cinema festival of Venice. The following year the medi­um-length movie about the passion of Christ, La ricotta, episode of Ro.Go.Pa.G., was censored for blasphemy against State religion. Afterwards, he worked on documentaries like La rabbia (1963), Comizi d’amore (1964) and Sopralluoghi in Palestina per il Vangelo secondo Matteo (1964), for which he went to Christ’s predication places, in search of an ideal set for Il Vangelo secondo Matteo. The movie won a lot of awards: Leone d’argento in Venezia, Premio OCIC (Office Catholique International du Cinéma), Nastro d’argento in Taormina, nominated for three Academy Awards in 1967.

In 1966 he got positive film critics for the movie Uccellacci e uccellini (1966) played by Totò and Ninetto Davoli, a film that Pasolini loved a lot. The movie received two Nastro d’argento and a special mention at the Cannes Festival. His career in the movie industry held strong till his death, which occurred in tragic circumstances on 2nd November 1975. Among the artist’s latest films were the so-called “Trilogia della vita”: Il Decameron (1971) (Berlin’s Golden Bear in 1972), I racconti di Canterbury (1972) and Il fiore delle Mille e una notte (1974) (Special Grand Prix of the Jury in Cannes).

Pasolini looked for authenticity of the city in sub-urban areas, but his extensive filmography also includes iconic locations of Rome such as the Colosseum, Lungotevere, other than the working-class districts Monti and Trastevere.

Colosseum
La Terra vista dalla Luna. Episode of the movie Le streghe (1967)
Because of his greed, Ciancicato Miao (Totò), in agreement with his son (Ninetto Davoli), persuades the new bride Assurdina (Silvana Mangano) to simulate a suicide attempt. The joke ends tragically with the death of Assurdina, who slips off a banana peel, and falls down from one of the arches of the Colosseum.

Via Nazionale
La sequenza del fiore di carta. Episode of the movie Amore e rabbia (1969)
The young Riccetto (Ninetto Davoli) sets off from Piazza della Repubblica for a carefree walk through the busy streets of the old town of Rome and cheerfully walks along Via Nazionale, dancing and chatting with passers-by.

Rione Monti
Accattone (1961)
At that time Rione Monti was a working-class district and was surrounded by wonderful monumental areas. It was the set for the scene in which Vittorio Cataldi, nicknamed Accattone (Franco Citti), tried to redeem himself by looking for an honest job at “Casa della serranda”, in via Baccina. The video camera overlooks the Arco de’ Pantani, with a view on Roman Fora.

Rione Trastevere
Accattone (1961)
Pasolini preferred the working-class districts like Trastevere, also when shooting scenes in the old town of Rome. In via San Michele, with a view on Piazza di Santa Cecilia and on the portal of the church the protagonist and his friends attempt a heist but fail.

Mamma Roma (1962)
In the night scenery of Piazza dei Mercanti, Sora Roma (Anna Magnani), accompanied by Biancofiore (Luisa Loiano), is moved when she sees her son Ettore (Ettore Garofolo) working as a waiter in a restaurant. The actor was noticed by Pasolini right in a restaurant and recruited for the film due to his features that perfectly matched with the subproletariat in Rome at that time.

Porta Portese
Mamma Roma (1962)
In the picturesque Porta Portese market Ettore (Ettore Garofolo) is selling some objects stolen to his mother, to make some money. On background, the facade of San Michele a Ripa Grande, housing the juvenile detention center.

Ponte Sant'Angelo
Accattone (1961)
The monumental bridge on Tevere acts as background to Accattone’s (Franco Citti) euphoria after a binge on the boat “Dar Ciriola”, by Saint Angel Castle.

Ponte Mazzini
Accattone (1961)
The unquiet protagonist attempts suicide by jumping off this bridge, after trying to induce Stella (Franca Pasut) to prostitute herself.

Cimitero Monumentale del Verano
Accattone (1961)
The kiosks of florists leaning against the mighty walls of the Cemetery still dot its perimeter, just like in the days when the protagonist was framed walking with his mischief fellows in Accattone.

Today a lively, young and multi-ethnic neighborhood, Pigneto was a proletarian area of the roman suburbs during the 60s. The proletarian environment attracted many masters of the Italian neorealism and here Pasolini decided to set most of the scenes of Accattone, a bond that still today is celebrated by several street art works dedicated to the artist, displayed by the streets of Pigneto.

Via Fanfulla da Lodi
Accattone (1961)
Accattone (Franco Citti) and his friends spend their days hanging around, sitting at the tables of the bar Necci (which was actually rebuilt in an old shop no too far away from the bar), in what Pasolini himself defined “a poor, humble unknown and deserted narrow street in a Rome that wasn’t Rome”.

Via Ettore Giovenale
Accattone (1961)
This is the street where the house of Accattone (Franco Citti) is located. A humble shack typical of the working-class suburbs of the time.

Nuovo Cinema Aquila
This cinema, which not only broadcasts popular movies but also experimental films and various festivals, dedicated one of its halls to Pier Paolo Pasolini, where various projections and debates about art movies take place.

This vivid historic district rich of remains from the ancient world, industrial and monumental buildings as well as contemporary architecture, was chosen as set of the last dramatic scenes of the movie Accattone.

Via Giovan Battista Bodoni and Via Beniamino Franklin
Accattone (Franco Citti), Balilla (Mario Cipriani) and Cartagine (Roberto Scaringella) arrange a robbery of cured meat while the camera gives a glimpse of the iconic “Monte de Cocci”.

In the 60s, Quadraro district, located between Via Appia Nuova and Via Tuscolana, was a working-class area inhabited by displaced and poor people. In the same period a building speculation took place near-by and new big districts like Cinecittà and Don Bosco were built further south-east.

Largo Spartaco
Mamma Roma (1962)
Sora Roma (Anna Magnani) moves to the modern buildings of Ina-Casa, located in Quadraro district to change her life. She leaves behind her life as a prostitute so that she can give her son a better life. They both walk around the so called “Boomerang”, which symbolised the new residential building in that period. Sora Roma and Ettore move around the streets on a motorcycle.

Via Lucio Sestio
Mamma Roma (1962)
This is the place where Sora Roma opens a fruit and vegetable stand, a new job that allows her to escape from the plight of prostitution and to offer a better future to her son.

Parco dell'Appia Antica
La ricotta. Episode of the movie Ro.Go.Pa.G. (1963)
The open spaces of the park, with several frames on the ruins of the medieval Torre Valca (Caffarella Park), are the background of the episode focused on the Passion of Christ.

Via Appia Antica
Accattone (1961)
Stella, forced to prostitute herself, rejects her first client. Accattone, regretful, gives her confort in the dark scenery among the ancient street's monuments.

Cinecittà Studios
Medea (1969)
The unforgettable opera singer Maria Callas tests herself in a first and only cinematographic performance playing the part of Giasone’s bride. Some indoor scenes were shot at the Cinecittà Studios.

Salò o Le 120 giornate di Sodoma (1975)
Pasolini shot some of the violent scenes of the movie representing the aggression of power on bodies and on people’s consciousness, in Cinecittà’s studio 15.

Ostia and Fiumicino
Comizi d’amore (1964)
Pasolini interviews the bathers on the beach of the roman coast, in order to investigate the value of sexuality in the society of that time.

The Memory of Pier Paolo Pasolini at Ostia
Ostia remembers Pasolini with two more monuments: a stele in white marble by Gaetano Gizzi in Piazza Gasparri and a stele in light red marble in Piazza Anco Marzio created by Pietro Consagra for the twentieth anniversary of the killing of the artist.

Pasolini and the street art between Pigneto and Tor Pignattara

Omaggio a Pasolini by Mr Klevra, 2014 - Via Fanfulla da Lodi 56
The face of a young woman, which represents Maria in the movie Il Vangelo secondo Matteo is played by a very young actress Margherita Caruso.

L’occhio è l’unico che può accorgersi della bellezza by Mauro Pallotta aka Maupal, 2014 - Via Fanfulla da Lodi 41
The title is based on Pasolini’s sentence and represents a big eye that overlooks the Pigneto district.

Io so i nomi by Omino 71, 2014 - Via Fanfulla da Lodi 49
Pasolini’s face is represented with a super-hero mask, which symbolizes his bravery and courage. The title of this work is based on a famous article published on the daily newspaper “Corriere della sera” in 1974.

Hostia by Nicola Verlato, 2015 - Via Galeazzo Alessi 215
It symbolically represents Pasolini’s death, brutally murdered in Ostia in 1975. This graffiti was renamed “The Sistine Chapel of Tor Pignattara” because of its massive dimension, its perspective illusion and the precision of the details.

Ritratto di Pierpaolo Pasolini by David Diavù Vecchiato - former Cinema Impero, Via dell’Acqua Bullicante 122
This work was made for a project with the idea of restoring the former cinema Impero and it is composed of four potraits, dedicated to Pasolini, Monicelli, Anna Magnani and the brothers Sergio and Franco Citti. 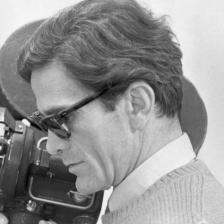 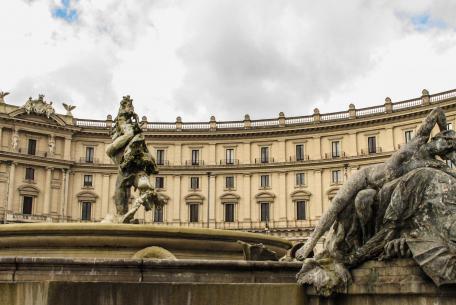 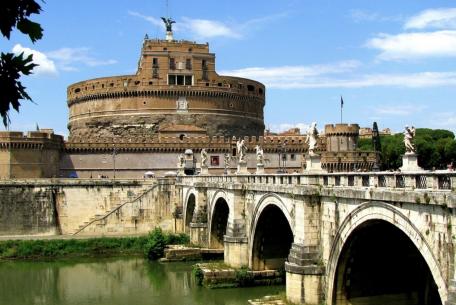 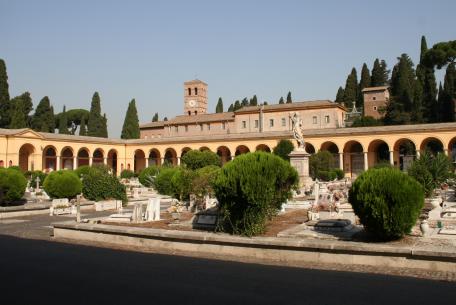 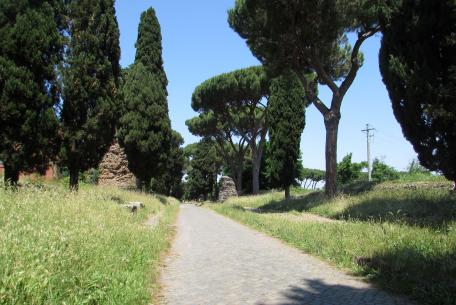 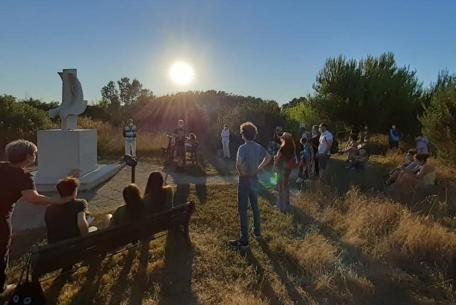