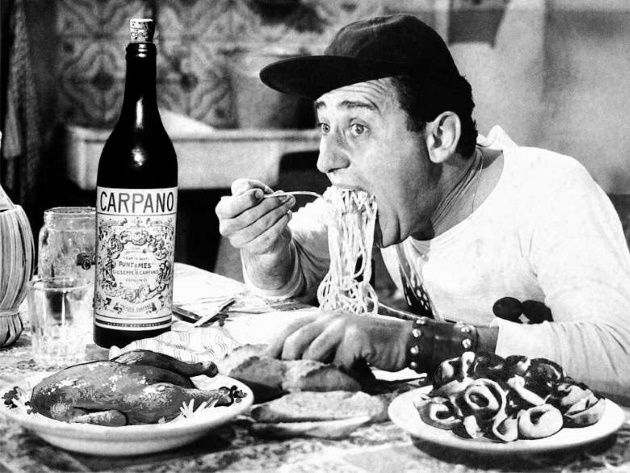 A Masterpiece of Italian Neo-Realism movies nominated for an Oscar and awarded at the Cannes Film Festival, Rome, open city takes place during the Second World War.

The armistice of Cassibile occurred on 3 September 1943. Italy surrenders to the Allies who have not yet arrived in the Capital, occupied by the Nazis. In this scenario is set the intense and tragic stories of Giorgio Manfredi, a communist militant and a prominent man, Francesco, anti-fascist printer, Pina, a widowed mother of a child, Lauretta, Pina’s sister, an artist, Marina, sentimentally linked to Manfredi, and Don Pietro, a well-liked and respected parish priest who defends and helps persecuted politicians and partisans.

Rome, open city was shot after the war was over, with expired films and a makeshift set.

For the character of Don Pietro Rossellini took inspiration from Don Luigi Morosini and Don Pietro Pappagallo: two priests engaged in providing help to the persecuted of Nazi-fascism.
Pina is Teresa Gullace, a symbol of Roman resistance to the ruthless German occupation, killed by a gunshot of a Nazi soldier while trying to speak to her captive husband.

The story takes place in post-war Rome: Antonio Ricci is an ordinary man who struggles every day to redeem himself from misery and give his family a future.

The narrative focuses on the theft of Antonio's precious bicycle, the only means to guarantee the subsistence of his loved ones. After having been purchased through great sacrifices, it was stolen on his first day at work as a billposter.

We can follow Antonio and his son around the city engaged in a desperate, but unsuccessful, search for his bicycle. The last scene of the film is unforgettable: in a resigned gesture of comfort, little Bruno takes his father's hand while evening falls over Rome.

Vittorio De Sica deliberately chose amateur actors for the film, despite the great difficulties in finding the funds to make it. He even refused the conspicuous offers of American producers who would have liked Cary Grant to star.

A Cinderella tale in reverse in which the charming Gregory Peck dresses the role of the unfortunate girl.

Set in the glittering Rome of the Dolce Vita, the economic boom, and the paparazzi, this romantic made in the USA fairy tale tells the story of Princess Ann visiting Rome and her encounter with the journalist Joe Bradley.

Amidst a thousand adventures and vicissitudes riding a flaming Vespa, the symbolic places of Rome become the silent and complicit witnesses of the birth of their love.

The producers initially thought of the very famous Elizabeth Taylor and Cary Grant as protagonists, but both refused, contributing to the consecration of Audrey Hepburn and Gregory Peck.

The famous scene in which Gregory Peck puts his hand in the Mouth of Truth pretending to have lost it was not in the script but was entirely improvised by the actor, provoking an authentic fright reaction in Audrey Hepburn.

#4 AN AMERICAN IN ROME

Alberto Sordi was one of the most representative actors of Italian cinema and a real symbol of Rome. Among other things, this year marks the hundredth anniversary of his birth.

In this film, he is Nando Mericoni, aka Santi Bailor from Kansas City, a slack youngster from Trastevere, whose only aspiration in life is to move to the United States. In the meantime, he tries to imitate American customs and movements, making himself ridiculous and often getting into trouble.

An American in Rome is a hilarious movie as well as a pungent satire of post-war Italy, fascinated by an imaginary and, therefore, distorted star and stripes myth known only through cinema, comics, and magazines.

Its cult scene, that of the “Maccheroni, you provoked me, now I'm gonna destroy you. I'm gonna eat you up, macaroni!”, was filmed with just one clapperboard, thanks to Alberto Sordi's skill, who partly improvised it.

In 1979, Alberto Sordi received the honorary citizenship of Kansas City, coveted by Nando as an ideal city.

Locations:
Via del Portico D'Ottavia
The Church of Santa Maria in Monticelli
Colosseum

A gang of small Roman offenders receives a tip on a sure hit on the pawnshop. To better prepare for the theft of life, they go to class with a retired burglar.

After opening a hole in the wall, they realize there is no safe to empty because they are not in the pawnshop, but in the kitchen of a popular apartment. What to do, then? They comfort themselves with a good bowl of pasta with chickpeas.

This film is the head of the caper movie genre, the "big shot film", a cinematographic thriller sub-genre, describing a group of individuals who accurately organize and implement a great theft.

Monicelli's idea was to make people laugh through the episodes of daily life of an Italy that, albeit laboriously, was recovering from the tragedy of the war.

Vittorio Gassman was the dramatic theatre performer par excellence: he had noble and athletic features and a proud look, too. Also, his voice was intent for acting on the scene, not in a comedy. But the director wanted him at all costs.
He was then constrained to a total relooking of his face: cotton in the nostrils to cover the hump of his nose, a thickness inside his lower lip, and a wig to reduce his spacious forehead.
In short, Hamlet turned into Peppe er Pantera. The result was an unforgettable character and the masterpiece film that we all know.

"Marcello come here!" an iconic phrase for one of the greatest masterpieces of all time, born from the brilliant mind of Federico Fellini, whose 100th birth anniversary is this year.

Marcello Rubini, a dissatisfied journalist always looking for the last scoop, is used to the 50's Capitoline mundane society: a vulgar, cynical world without values and hopes, made of betrayals, violence, and boredom of living.

Starlets, paparazzi, suicides, and murders: La dolce vita shows a glossy and sparkling Rome which conceals the vices and ugliness of the society of the time under the carpet.

During the filming of the unforgettable bath scene in the Trevi Fountain, the Swedish Anita Ekberg showed no problem staying in the icy water for hours. Mastroianni, on the other hand, wore a wetsuit under a tuxedo and drained a bottle of vodka before diving.

The term Paparazzo entered the world lexicon. It defines the photographers of assault and has been coined by Fellini on the occasion of the film.

Some outdoor locations, such as the Dome of St. Peter and Via Veneto, were rebuilt in the Cinecittà Studios.