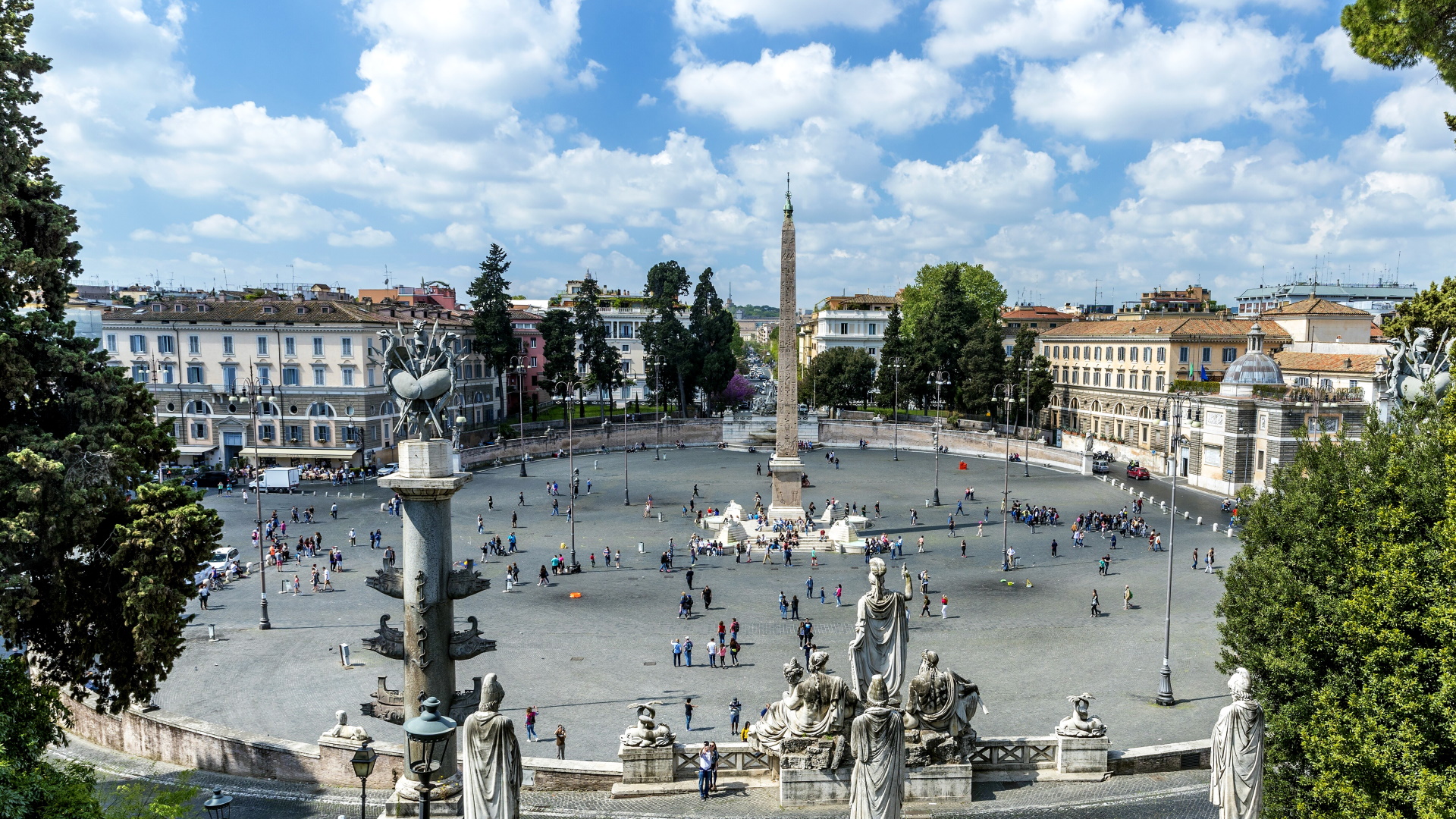 Monumental and elegant square, Piazza del Popolo is at the top where Via del Babuino, Via di Ripetta and Via del Corso meet, the three main streets of the historic centre of Rome.

The urbanization of the area began in the second half of the 16th century with the construction of a first fountain, fontana del Trullo, designed by Giacomo Della Porta, today in Piazza Nicosia, and with the consecutive positioning of the Flaminio Obelisk, high about 24 meters, moved from the Circus Maximus by order of Sixtus V in 1589; it was the first obelisk to be moved to Rome, at the time of Augustus, to celebrate the conquest of Egypt.

The external façade of today's Porta del Popolo (the ancient Porta Flaminia) was commissioned by Pope Pius IV to Michelangelo. The artist, however, transferred the task to Nanni di Baccio Bigio, who carried out the work between 1562 and 1565. "Felici faustoque ingressui MDCLV" (For a happy and auspicious entrance): this is the message engraved on the internal façade, created by Bernini for Alexander VII, on the occasion of Christina of Sweden's arrival in Rome in 1655.

During the 1600s, the two twin churches, Santa Maria in Montesanto, also known as the "Church of the Artists", and Santa Maria dei Miracoli were built. They were initially designed by Carlo Rainaldi and both later completed by Gian Lorenzo Bernini with the cooperation of Carlo Fontana. Conceived by Rainaldi as symmetrical constructions, due to space issues, they have different plans and different domes: octagonal for Santa Maria dei Miracoli and dodecagonal for Santa Maria in Montesanto. Nevertheless, from the square, thanks to an optical effect, they look identical.

On the opposite side of the square stands the splendid Basilica of Santa Maria del Popolo, dating back to the 15th century, enriched and modified over the centuries by the intervention of numerous architects and artists.It preserves extraordinary masterpieces: the Chigi Chapel was built from 1513 on a design by Raffaello and completed between 1652 and 1656 with the intervention of Bernini; the Cerasi Chapel houses the Crucifixion of St. Peter and the Conversion of St. Paul by Caravaggio, and the altarpiece depicting the Assumption of the Virgin by Annibale Carracci; the Della Rovere Chapel, realized by Andrea Bregno between the end of the 15th and the beginning of the 16th century, is decorated with magnificent frescoes attributed to Pinturicchio and his workshop.
According to a legend, on the Colle degli Ortuli where the Basilica stands, there is the cursed tomb of the suicide emperor Nero, whose ashes were buried in a porphyry urn under a walnut. Near the main altar of the church, some bas-reliefs recall the story.

Following a new urban layout, designed by the architect Giuseppe Valadier in the early 19th century, the new Piazza del Popolo looks like a large ellipse around the Egyptian obelisk, embellished and framed by sculptures, gardens and fountains.
In the centre of the square is the fontana dei Leoni (fountain of the Lions) by Valadier himself, which replaces the 16th-century fountain by Della Porta and surrounds the Flaminio obelisk. It has round travertine basins, dominated by Egyptian-style white marble lions, from whose mouths the water jets flow.

At the centre of the eastern hemicycle is the fontana della Dea Roma (fountain of the Goddess Roma), adorned with a large sculptural group. A statue of the armed goddess is flanked by two statues depicting the rivers Tiber and Aniene, and the she-wolf nursing the twins at its foot. Behind is the Pincio, a wonderful urban walk from whose terrace you can admire a spectacular sunset.

In the centre of the opposite hemicycle, stands the imposing sculptural group adorning the fontana del Nettuno (fountain of Neptune): a statue of the god with the trident in his right hand, at whose feet are placed two tritons with dolphins.The sculpture dominates a large travertine semicircular basin above which a shell valve collects the water poured from a small basin at the top.
Both fountains of the two hemicycles were designed by Valadier and sculpted by Giovanni Ceccarini.

The layout of the square was completed by the two fontane sarcofago (sarcophagus fountains), in replacement of a drinking trough and a washtub which until the 18th century gave the area a rural appearance. One fountain is leaning against the church of Santa Maria del Popolo, has the portrait of two spouses, and dates back to the middle of the 3rd century AD. The other one is positioned close to the opposite "Giacomo Acqua" barracks, formerly of the papal guards. It has a decoration with a male figure in a toga and can be dated to the last quarter of the same century.

Until the 19th century, the square was one of the places where capital executions took place, at the hands of the famous executioner Mastro Titta. As recalled by a plaque affixed to the barracks in 1909, the two Carbonari Angelo Targhini and Leonida Montanari were guillotined here, "guilty of lese majesty and wounds with danger".

The square’s fame spread worldwide over the years as a site for fairs, carnivals, games and competitions and as a symbol of Renaissance papal patronage. Its beauties, cafes, workshops and adjacent stores, formerly frequented by people such as Trilussa, Guttuso and Pasolini, make Piazza del Popolo the symbol of the very Roman flavour and a spectacular entrance to the heart of the capital. 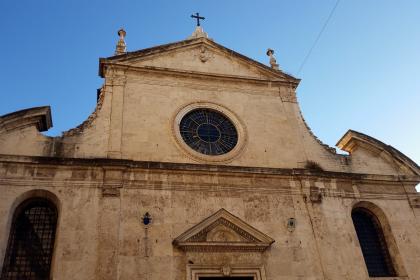 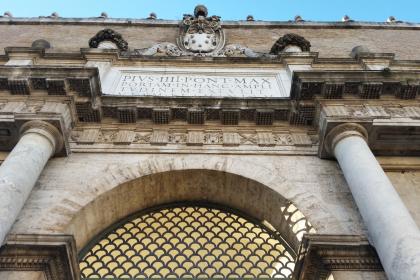 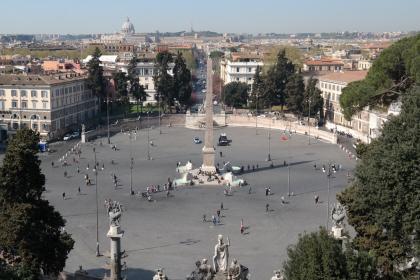 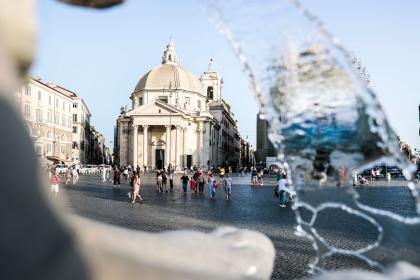 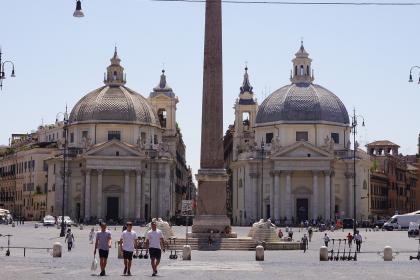 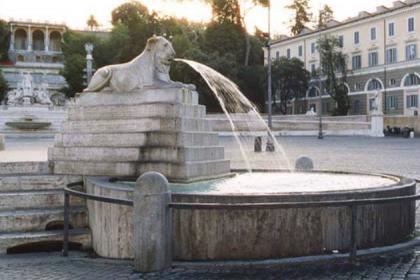 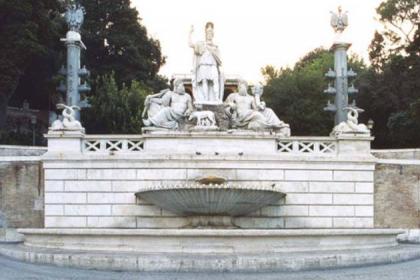 The Fountain of Dea Roma in Piazza del Popolo
Monuments 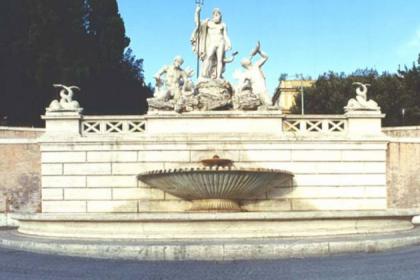 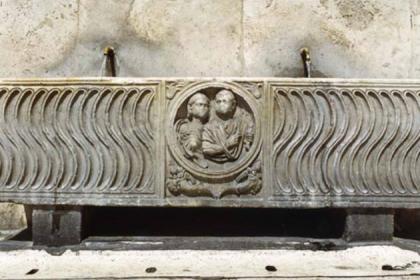