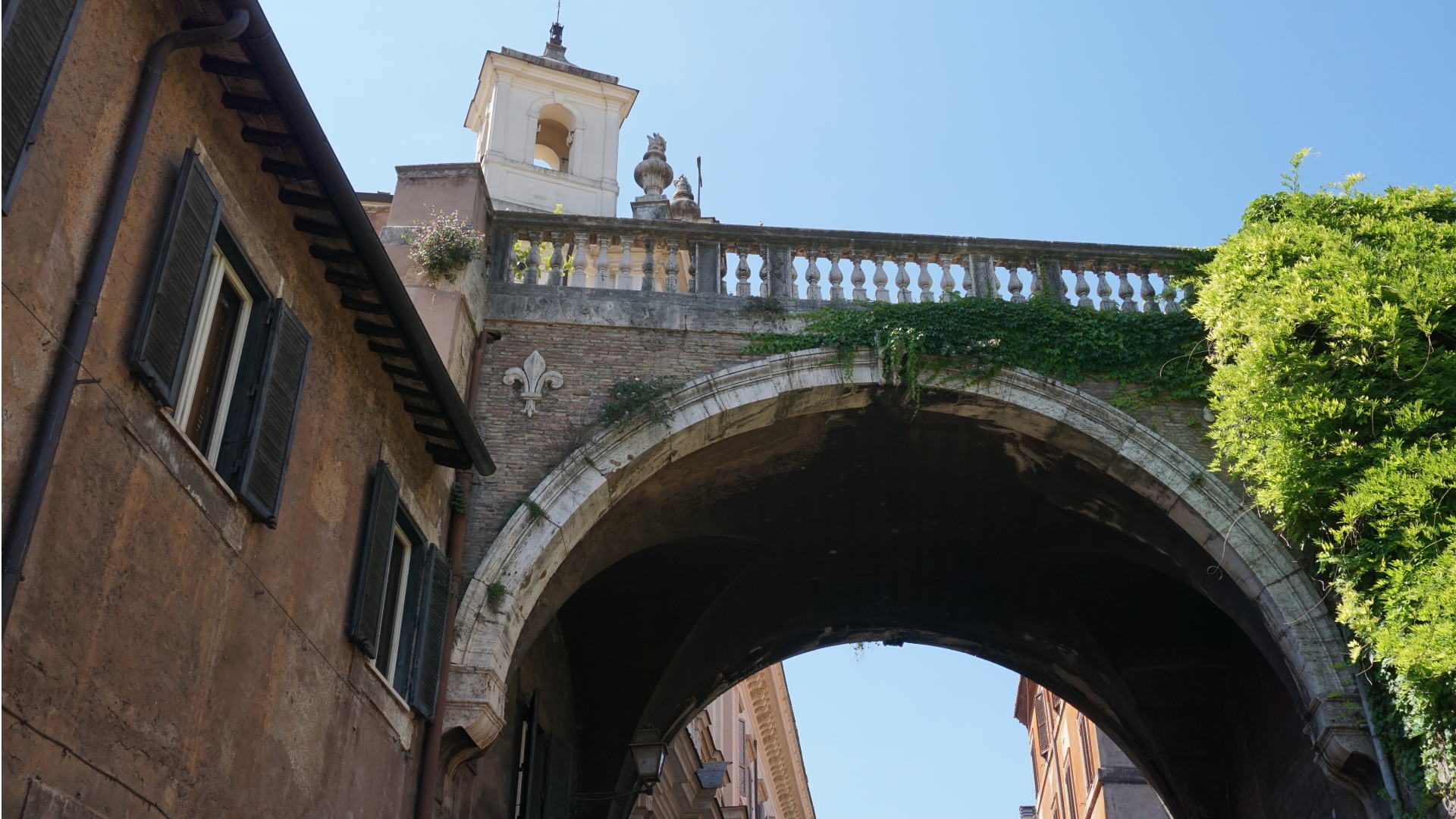 “Rome not only needs divine protection and armed and spiritual strength, but also the beauty that the material comforts and ornaments provide”. So wrote Sixtus V, the pope who laid the groundwork of modern Rome, the city whose exoskeleton the visitors see today. We are in 1590: in less than 200 years, since the papal seat moved back to Rome in 1420 following the Avignon period, the population of the city increased from about 20 thousands to more than 100 thousands (despite the trauma of the Sack of Rome in 1527) and Rome regained its ancient role of universal guide.

Renaissance Rome, the Rome of Bramante, Michelangelo and Raphael, is a city that has replaced Florence as the symbol of artistic and cultural influence, a city that was changing its face day after day, rewriting its medieval past, when the irregular and discontinuous urban fabric was dotted with ancient Roman ruins, low houses, towers and crenellated fortifications. The city undegoes a construction boom with grandiose urban and architectural projects promoted by the popes, and flanked by the initiatives of wealthy and powerful privates restoring churches and enlarging or building sumptuous palaces.

Many projects stemmed from the need to facilitate the access to the Vatican. This is the case of Via Giulia, the first and longest road in Rome (1 km) with a straight track, opened in 1508 by Bramante for Pope Julius II. Between the Vatican and Ponte Sisto – started in 1473 and named after Pope Sixtus IV, uncle of Julius II – two parallel road axes were planned along the banks of the Tiber: Via Settimiana (later called della Lungara) and Via Giulia. While the former, however, continued to be a sort of a country road for a long time, flanked by a few buildings and suburban villas, Via Giulia cut through an already densely populated neighborhood.

Aside from serving as a means of communication and representation for the Church, the road was supposed to host the city’s new layman’s administrative center, given that it was not far from the new Palazzo della Zecca (papal mint) and the old Cancelleria (today’s Palazzo Sforza Cesarini). In the area between Vicolo del Cefalo and Via del Gonfalone, Julius II and Bramante designed a new imposing courthouse, with arcades and towers at the four corners. Though the building was never completed, part of its foundation remains, with a few rusticated blocks known because of their shape as the “Sofas of Via Giulia”.

While remaining incomplete, the new road immediately became one of the main centers of the Renaissance in Rome and many noble families built their palaces here, from Sacchetti to Chigi and Ricci. Others came when Leo X rose to the papal throne: further construction was done mainly in the northern part of the road between the unfinished Palazzo dei Tribunali and the banking district, which supported the Florentine merchant community living in the Florentine Quarter (a Florentine himself, Pope Leo X was the son of Lorenzo the Magnificent) and the already flourishing Tuscan colony kept on growing. Splendid buildings were built with elegant gardens sloping down towards the Tiber, many of which had small private piers. Important artists such as Raphael and Antonio da Sangallo the Younger also acquired plots of land in the area.

Leo X entrusted Jacopo Sansovino with the construction of the Church of San Giovanni. Continued by Antonio da Sangallo the Younger, Giacomo Della Porta and Carlo Maderno, the church is also famous for its illustrious burials, including those of Carlo Maderno and Francesco Borromini. San Giovanni is the national church of the Tuscan community, whose members held prominent roles in the curia, in the world of the arts and in economic activities, first of all the banking one. In the first twenty five years of the 16th century, Rome had about thirty banks owned by Florentine families, including the Gaddi, the Capponi and the Strozzi.

After the Sack of Rome in 1527, works in the area were relaunched by the Farnese family, who chose to build here a new lavish residence overlooking the Campo de’ Fiori market and the commercial area. Commissioned by Cardinal Alessandro Farnese (the future Pope Paul III), Palazzo Farnese is one of the most refined palaces in Rome, started by Antonio da Sangallo the Younger, continued by Michelangelo and finished by Vignola and Giacomo Della Porta, who designed the rear facade on Via Giulia. According to Michelangelo’s plan, the project was originally much more extensive than we see today: the Farnese Arch should have linked Palazzo Farnese and its gardens with the Villa Farnesina, on the other side of the Tiber.

In 1586, the Ospizio dei Mendicanti (“Beggars’ Hospice”) was built by the architect Domenico Fontana on the orders of Pope Sixtus V and marked the southern end of the road. More than a commercial artery, in the following centuries the road became the theater of tournaments, races, parties and parades, for example that of the “ammantate”, girls without a husband who received a dowry from the university of the goldsmiths of Sant’Eligio. With the construction of the retaining walls along the Tiber in the late 19th century, the street radically changed its face: many buildings were demolished or scaled down, and the gardens along the river became a thing of the past. However, the area of Via Giulia still retains its charm and elegance with its several palaces and churches.

Walking along via Giulia from Ponte Sisto, the first landmark is the Fontana del Mascherone, a a bizarre marble fountain realized in 1570 combining ancient marble sculptures. The front of the fountain consists of a laughing mask and it is said that during some particular celebration to honor the Farnese family from the mask flushed out good wine instead of simple water. Churches include Santa Caterina da Siena, a point of reference for the Sienese community that lived here; San Biagio degli Armeni, which is often referred to by local people as San Biagio della Pagnotta (of the loaf of bread), a nickname originating from the traditional distribution of bread to the poor that took place on the saint’s feast day; Santa Maria dell’Orazione e Morte, built around 1538 to bury the “poor dead” found in the countryside or drowned in the Tiber, and rebuilt on a project by Ferdinando Fuga in 1733-1737. Among the palaces, Palazzo Falconieri, built in the 16th century for the Ceci family and enlarged by Francesco Borromini in 1650; Palazzo Cisterna; Palazzo Sacchetti, built by Antonio da Sangallo the Younger, who lived here until his death in 1546; the 17th-century Palazzo Ricci Donarelli; the 16th-century Palazzo Medici Clarelli and the so-called Raphael house. 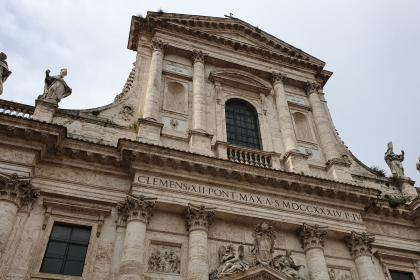 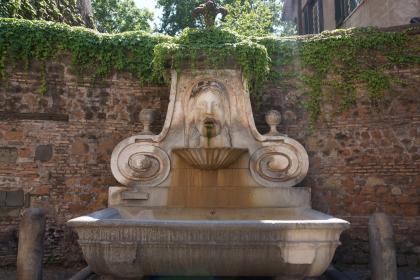 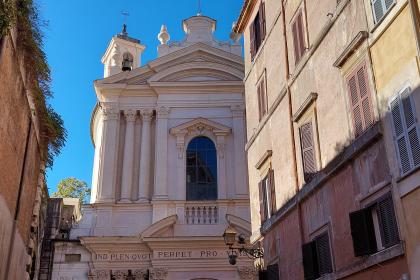 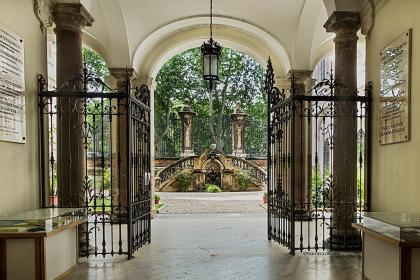 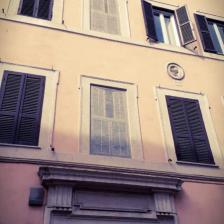 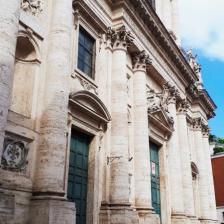 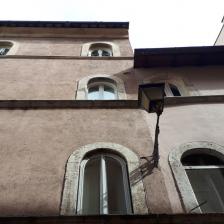 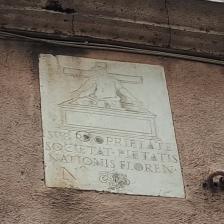 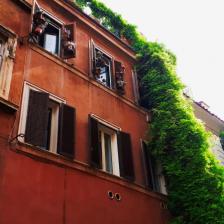 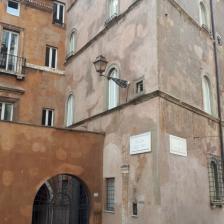 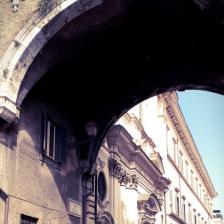