Discovering the museums of Villa Borghese 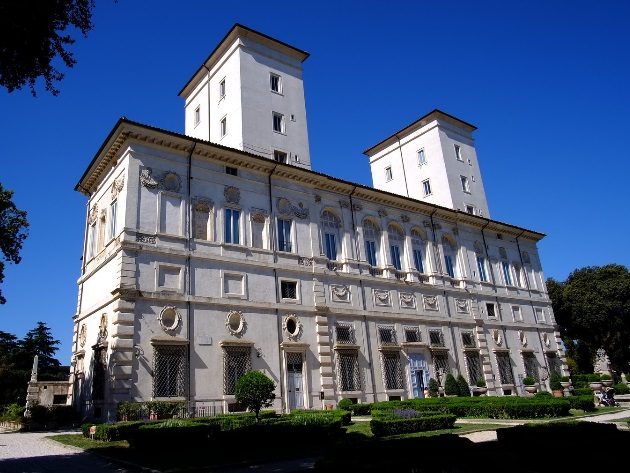 Located in the heart of the city, a few steps from the most refined shopping streets and elegant Roman houses, the Villa Borghese Park contains buildings, sculptures, monuments, and fountains. They are the work of illustrious artists of Baroque, neoclassical, and eclectic art and are surrounded by centuries-old trees, ponds, Italian gardens, and large free spaces, created with care.

Its construction is due to Cardinal Scipione Borghese, nephew of Pope Paul V who, in 1608, entrusted it to Flaminio Ponzo and his pupil Giovanni Vasanzio, who was succeeded in 1621 by Girolamo Rainaldi. The architect of the arrangement of the gardens was Domenico Savino from Montepulciano. The works lasted until 1633, the year of the Cardinal's death.

In the 18th century, Marcantonio Borghese entrusted the restoration and improvement of the Villa to Antonio Asprucci and his son Mario. The works first affected the Casino Nobile and, in the following years, the park, with symmetrical and perpendicular avenues and the neoclassical temples and Piazza di Siena, where the famous horse show and the exciting Carabinieri carousel take place.

In the 19th century, Camillo and Francesco Borghese enlarged the park surface and, in 1903, the Villa was purchased by the Italian State and used as a public park.

Villa Borghese hosts some noteworthy museums, in addition to the suggestive Garden of the lake, where you can rent a boat and admire the Temple dedicated to Aesculapius, the Sundial, the Fountain of the Family of Satyrs, the Secret Gardens, Piazza di Siena, the Parco dei Daini, an enchanting private place for the Prince with works by Pietro and Gian Lorenzo Bernini.

The splendid Borghese Gallery is located inside the Casino Borghese designed by Vasanzio; the Fortezzuola is the seat of the delightful Pietro Canonica Museum; Villa Giulia and Villa Poniatowski, two magnificent Renaissance residences, host the National Etruscan Museum; inside the monumental building of neoclassical inspiration and Liberty style is the Galleria Nazionale displaying works of Modern and Contemporary art; in the Orangery of the Villa, known as the Casino dei Giuochi d'Acqua, is the Carlo Bilotti Museum.

One of the most captivating museums in Rome is the Borghese Gallery, whose prestigious collection was set up by Cardinal Scipione Borghese at the beginning of the 17th century. Inside it are some of the major masterpieces by Antonello da Messina, Giovanni Bellini, Raphael, Tiziano, Correggio, Caravaggio and splendid sculptures by Gian Lorenzo Bernini and Canova.

The most significant nucleus of sculptures and paintings dates back to Cardinal Scipione (1579-1633), son of Ortensia Borghese, Pope Paul V's sister, and Francesco Caffarelli.

Cardinal Scipione's attention was for ancient, Renaissance, and contemporary art, through which he wanted to evoke a new golden age.

In 1607, the Pope assigned to Scipione 107 paintings confiscated from the painter Giuseppe Cesari, known as the Cavalier d'Arpino. The following year was the clandestine removal from the Baglioni Chapel in the church of San Francesco in Perugia and the transport to Rome of the Deposition by Raphael, also assigned to Cardinal Scipione with papal motu proprio.

One of the most admired and exciting masterpieces in the Gallery dates back to the period between 1621 and 1622, the sculptural group representing the Rape of Proserpina, the work of Gian Lorenzo Bernini. Unmissable.

In 1682, part of the legacy of Olimpia Aldobrandini, which included works from the collection of Cardinal Salviati and Lucrezia d'Este, merged into the already rich gathering.

The portrait of Paolina Bonaparte Borghese, painted by Canova between 1805 and 1808, has been in the Villa since 1838. In 1827, Camillo Borghese bought Correggio's beautiful Danae in Paris.

You can feel a turn-of-the-century atmosphere in this small but precious museum, located in the heart of Villa Borghese and dedicated to the artist Pietro Canonica (1869-1959).

An internationally renowned sculptor, music lover, and composer, Canonica trained in Turin at the end of the 19th century and then spent a long time at the courts of Europe where the aristocracy commissioned him with portraits and commemorative monuments.

He moved to Rome in 1922, and in 1927 he managed to get from the Municipality the use of the building, today housing the museum, to make it his home studio. In exchange, the artist pledged to donate all the works collected over the years to become a museum named after him after his death.

The uniqueness of this museum gives us the image of a human and professional artist.

The museum offers different perspectives: the private apartment on the second floor, rich in Piedmont 19th-century furnishings and valuable paintings, telling his memories and personal affections; the atelier on the ground floor, which testifies to his technical expertise.

The itinerary ends with the exhibition rooms where you can admire most of his works, such as little busts, great equestrian statues, sculptures, sketches, models, casts. The collection is a journey between the late 19th-century and the 20th-century first half history and is also a didactic journey through the phases and processes of sculpture.

Dedicated to the Etruscan and Faliscan civilizations, the National Etruscan Museum of Villa Giulia hosts finds from Southern Etruria, territory corresponding to Upper Lazio, between the Tiber River and the Tyrrhenian Sea. The place is extremely rich in evidence of various ages and civilizations, being a natural meeting point, a crossroads of traffic along the main communication routes of the central Mediterranean.

The Museum is housed in two splendid Renaissance villas: Villa Giulia and Villa Poniatowski. Used as a gallery since 1889, it is now one of the most representative museums of Etruscan art at the international level.

Among the most famous works are the bronzes from Vulci, the terracotta decorations from the Sanctuary of Portonaccio in Veio, including the famous Apollo (6th century B.C.), the Sarcophagus of the Spouses from Cerveteri. Moreover, you can admire the gold foils from Pyrgi (Santa Severa) with Etruscan and Phoenician inscriptions (dating back to the end of the 6th century B.C.) and the high relief of the fictile pediment, also from Pyrgi, with the myth of the "Seven against Thebes," (first half of the 5th century B.C.).

The Falisco-Capenate section presents materials coming from the centers of the middle Tiber valley such as Corchiano, Vignanello, Nepi, Narce, and in particular Falerii Veteres (Civita Castellana) with terracotta sculptures, among which the extraordinary Apollo dello Scasato, coming from the decorations of the sanctuaries of the area.

The Museum offers numerous itineraries that make it possible to admire the underground areas of the Villa, such as the nymphaeum, the remains of the Virgin Aqueduct (Augustan age), and the "neviera" of Pope Julius III.

A life-size reproduction of the Temple of Alatri, an Etruscan-Italic temple dated around the 3rd and 2nd centuries BC, was created between 1889 and 1890 in the gardens of Villa Giulia.

The Villa, built by Pope Julius III, Giovanni Maria Ciocchi del Monte, between 1550 and 1555, is articulated on two courtyards separated by a nymphaeum, to the realization of which participated great artists such as Giorgio Vasari, Jacopo Barozzi da Vignola, Bartolomeo Ammannati, and Michelangelo Buonarroti. Part of the decorative apparatus is by Taddeo Zuccari and Prospero Fontana. The hemicycle displays delicate pictorial interventions inspired by the grotesques of the Domus Aurea. The rooms host an extraordinary cycle of frescoes depicting the Seven Hills of Rome.

Villa Poniatowski is the second headquarters of ETRU, inaugurated in 2012. It is embellished with pools and fountains and a large garden formed by terraces adorned with ancient sculptures. Giuseppe Valadier transformed it into a villa in the early 19th century on the orders of Stanislaus Poniatowski, the last descendant of the Kings of Poland.

Opened in Rome in 1883, the National Gallery of Modern and Contemporary Art moved to Valle Giulia for the Universal Exposition of 1911. It is still inside in the monumental building of neoclassical inspiration and Art Nouveau style designed by architect Cesare Bazzani.

It houses one of the largest art collections, about 20,000 works including paintings, drawings, sculptures, and installations testifying to the main artistic currents from the 19th century to the present day. Here, you can admire artworks from Neoclassicism to Impressionism, from Divisionism to the historical avant-garde movements of the early 20th century, from Futurism and Surrealism to the most conspicuous nucleus of Italian art between the '20s and '40s, from the Novecento movement to the so-called Roman School.

In 2014, it was affected by an extensive reorganization and rearrangement of spaces. The collections were the focus of a profound reinterpretation that rethought the layout, first in The Lasting, the interval and the duration then in the Time is Out of Joint exhibition, respectively prologue and body of a discourse on a disjointed, non-linear, stratified time. Time is suspended and replaces the traditional chronological reading, allowing the Gallery to experiment with different exhibition practices and new keys to interpretation.

Located inside the Orangery of Villa Borghese, the Museum dedicated to Carlo Bilotti was also known as the Casino of Water Games for its fountains, nymphaeums, and proximity to the Garden of the Lake. It unfolds in a series of rooms once richly decorated and furnished, where the Borghese princes used to organize parties and social events. Following the serious damage caused by the cannonade of 1849, during the French defense of the papacy against the Roman Republic, it was rebuilt and adapted to a winter shelter of citrus fruits, losing all its precious decorations.

In 2006, the Orangery returned to being a place of leisure and culture thanks to a challenging restoration that transformed it into a museum to house the permanent donation by Carlo Bilotti, an Italian-American entrepreneur, and internationally renowned collector, consisting of paintings, sculptures, and drawings.

The donation includes a substantial nucleus of paintings and sculptures by Giorgio de Chirico, representative of the most famous subjects produced by the artist between the end of the 1920s and the 1970s, the portrait of Carlo Bilotti by the American artist Larry Rivers, that of Tina and Lisa Bilotti by Andy Warhol, Gino Severini's Summer and the large bronze Cardinal by Giacomo Manzù. 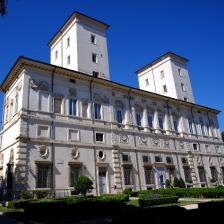 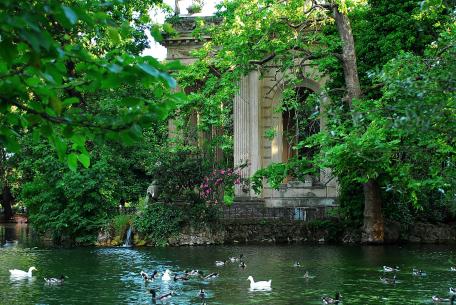 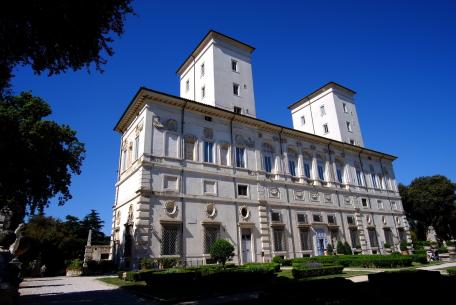 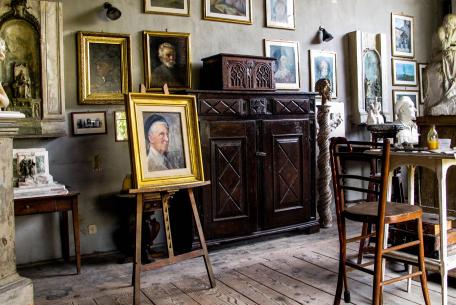 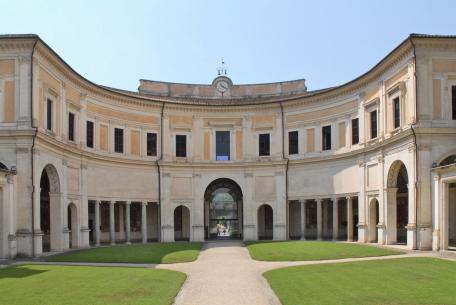 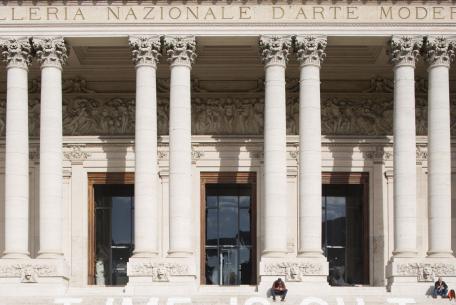 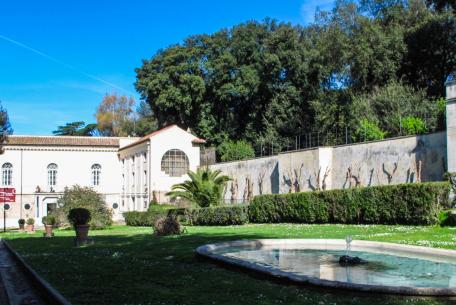