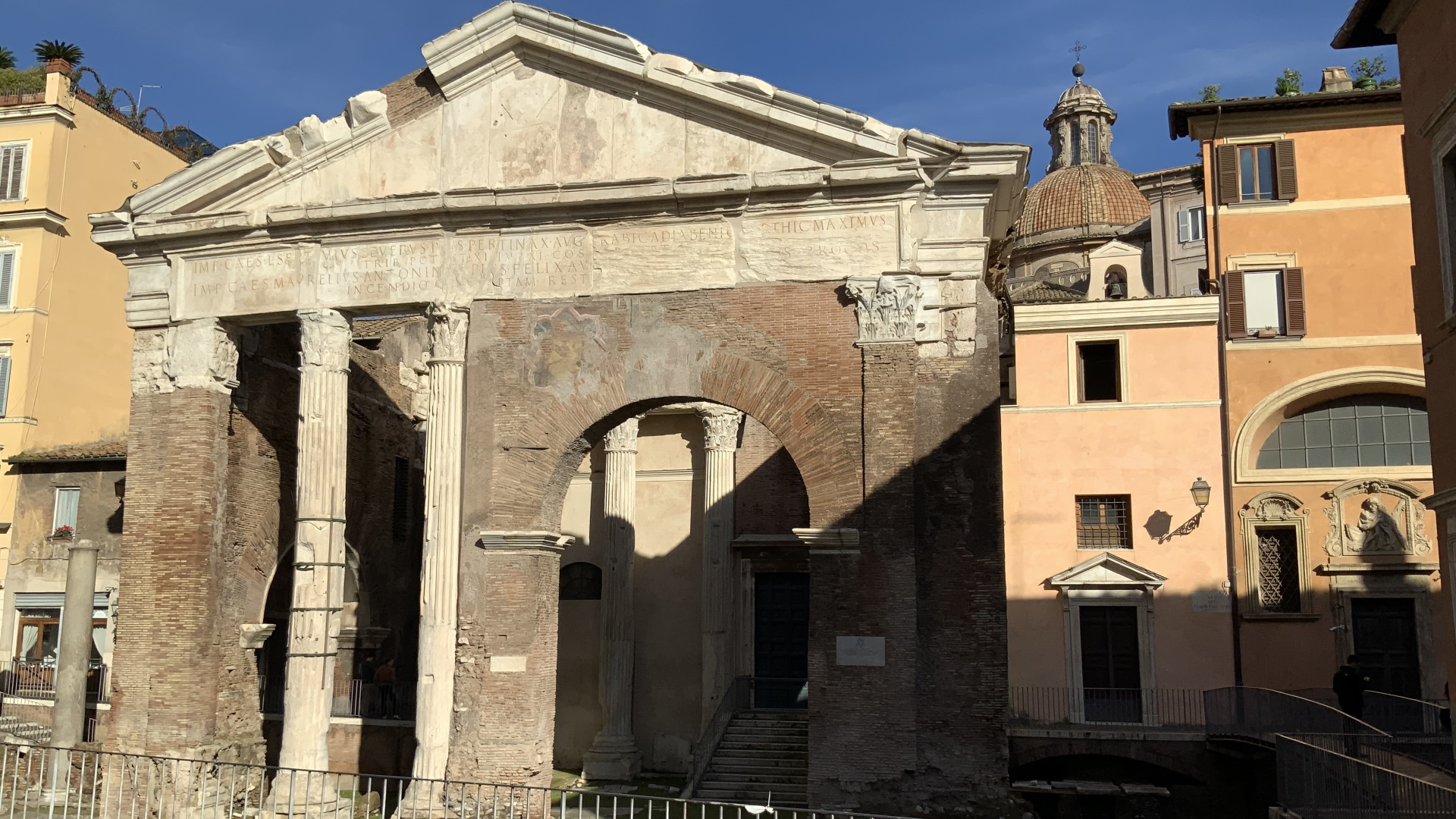 Located on the left bank of the Tiber in front of Tiber Island, the smallest rione in the city houses the world's second-oldest Jewish Ghetto (1555) after that of Venice.

The district is cherished by Romans and tourists, who gather here to taste the recipes of the renowned traditional Jewish-Roman cuisine, an excellent sour cherry and ricotta cake in the famous Boccione pastry shop, or a delicious slice of pizza in the old Urbani bakery.

Its name derives from the church of Sant'Angelo in Pescheria, formerly known as Sant'Agnolo Pescivendolo. It was located near the ancient fish market, under the columns of the Portico d'Ottavia. Today, right next to the Portico, you can still read the marble slab - the original is in the Capitoline Museums - which reported the maximum size of the fish that could be sold in the market and which reads: " Capita piscium hoc marmoreo schemate longitudine majorum usque ad primas pinnas inclusive conservatoribus danto ", or " The heads of all fish that exceed the length of this plaque, up to and including the first fins, must be given to the Conservatories (of the Capitol). "

Among the most important monuments, archaeological sites, and buildings of worship in the district, you can find the Tempio Maggiore, the great and beautiful Synagogue with its original Assyrian-Babylonian style, the Theater of Marcellus (11 BC), which probably served as a model for the construction of the Colosseum and was the first theater in Rome dedicated to poetry and music, the Crypta Balbi, a vast complex of ancient buildings and one of the seats of the National Roman Museum, the Portico of Octavia, a monumental construction dedicated by Emperor Augustus to his sister and the only one preserved of the great Roman ones, and the Turtle Fountain, one of the most beautiful fountains in Rome, with a story to tell.

Did you know that the story of the Fountain of the Turtles is linked to a romantic legend? Duke Mattei, whose palace overlooks the square on which the fountain stands, build the fountain in just one night to surprise his future father-in-law, who was against him marrying his daughter. The next day the bride-to-be and her father came out of the window to admire the fountain. So that no one else could enjoy the view, the duke bricked the window up, and so it has remained ever since.

Located at street numbers 1 and 2 of via del Portico di Ottavia, the House of Lorenzo Manilio is a very particular building. Constructed in 1468, it attests to its owner's passion for Roman things. The marble fascia that decorates its facade bears the following text engraved in large letters in Latin: " URBE ROMA IN PRISTINAM FORMA (MR) ENASCENTE LAUR MANLIUS KARITATE ERGA PATRI (AM) (A) EDIS SUO NOMINE MANLIANAS PRO FORT (UN) AR (UM) MEDIOCRITATE AD FOR (UM) IUDEOR (UM) SIBI POSTERISQ (UE) SUIS A FUND (AMENTIS) P (OSUIT) AB URB (E) CON (DITA) MMCCXXI L AN (NO) M (ENSE) III D (IE) II P ( OSUIT) XI CAL (ENDAS) AUG (USTAS) " or " While Rome is reborn to its ancient splendor, Lorenzo Manilio, as a sign of love for his city, built from the foundations on Piazza Giudea, in proportion to its modest possibilities, this house that takes the name of Manliana from its surname, for himself and his descendants, in the year 2221 from the foundation of Rome, at the age of 50, 3 months and 2 days; he founded the house on the eleventh day before of the calends of August ". Besides, the name Lorenzo Manili is repeated on the architraves three times in Latin and one in Greek, the motto Ave Roma is marked over the windows, the base of the building is dotted with archaeological finds embedded in the plaster.

The rione coat of arms depicts an angel with a palm branch in his left hand. But we know of two other versions of the same emblems: in one, the angel wields a sword in his right hand and a scale in his left; in the other, a fish appears on the coat of arms, which is a precise reference to the Foro Piscario, the fish market of the Portico di Ottavia, demolished in the late 19th century. 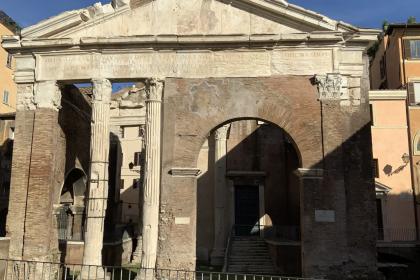 The Church of Sant'Angelo in Pescheria
Churches and Basilicas 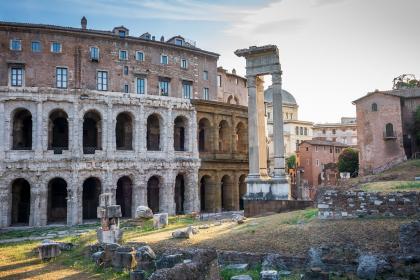