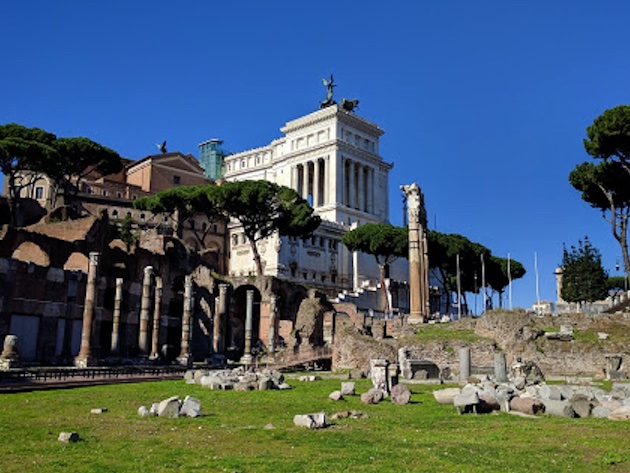 The Forum of Caesar was the first of the Imperial Forums to be built; it was begun in 54 BC, as an extension of the ancient Roman Forum which had now become inadequate to fulfill the functions of a monumental and administrative centre. The new Forum extended between the latter and the Velia hill - later flattened by Trajan to build his Forum - between the Quirinale and the Capitoline Hill.

Caesar, to carry out his project, expropriated the private houses that stood in the area and moved the Curia of the Senate, reducing the space of the Comitium.

The forum, whose plan was later taken as a model for the Imperial Forums, consisted of a long and narrow square surrounded by a double portico on three sides where, in the centre of the bottom side, stood the temple dedicated to Venus, mother of Aeneas and foremother of the gens Iulia. At the centre of the square was the equestrian statue of Caesar.

The temple still visible today, the double portico identified with the Basilica Argentaria and the large semicircular public latrine belong to a reconstruction of the Trajan age; while the tabernae that flank the portico belong to the Caesarian age.

The complex consists of the following monuments:

Temple of Venus Genetrix - Erected after a vow by Caesar before the battle of Pharsalus against Pompey in 48 BC, the temple was inaugurated in 46 BC, before the Forum was completed. Built at the bottom of the square, with 8 columns on the front and 9 on the long sides, it had no columns on the bottom side. The temple currently visible dates back to a reconstruction by Trajan related to the demolition of the Velia hill behind it. The rich architectural decoration of the temple was rebuilt basing both on historical sources and on the study of the fragments recovered during the excavations of the 1930s.

Tabernae - Placed on the long sides of the Forum, they are of different sizes and of different construction techniques, highlighting the different architectural phases and the many restorations already undergone in ancient times. Those located on the second floor - the third was already buffered at the time of Trajan for security reasons - are wedged in the cut of the Capitoline Hill. Today they constitute a small antiquarium of the architectural fragments found during the opening works of Via dell’Impero, and are among the most beautiful of the imperial age.

Basilica Argentaria - Originally it was supposed to be a small market specialized in the sale of antique bronze and silver pottery. Later it hosted a school, as evidenced by some graffiti preserved on the walls with verses of the Aeneid in Latin and Greek letters.

Latrine - A colonnade open to the south-east gave access to a large latrine, the largest found so far in Rome, also probably built during the works commissioned by Trajan in the Forum of Caesar. The semicircular environment has a crawl space under the floor with brick pillars - suspensurae - for the insertion of the sewers.