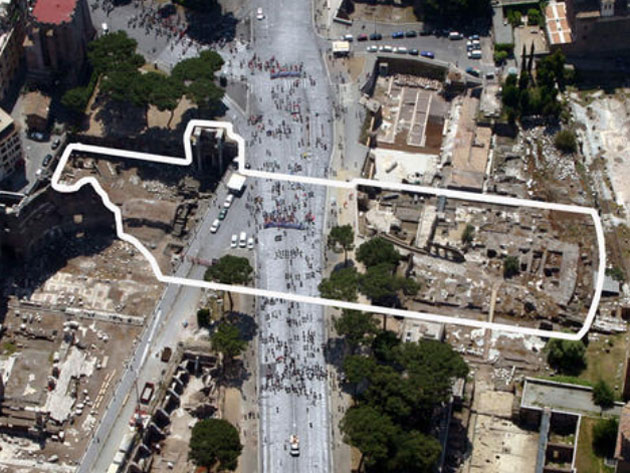 This Forum was built by Domitian (81-96 AD), but inaugurated after his death by his successor Nerva in 97 AD.

The name Transitory Forum derives from the fact that it was created in the narrow long space between the Forum of Peace, the Forum of Caesar and the Forum of Augustus, on the site first crossed by the Argiletum, an important road between the Roman Forum and the Suburra quarter. Due to the narrow space available, the Forum of Nerva did not have any porticoes, as with the other Imperial Forums, but a colonnade situated near the rear wall, to which it was connected by short architraves. On its short side towards the Suburra there was a temple dedicated to the goddess Minerva, the protecting deity of Domitian. Only two columns (called the “colonnacce”) remain of the original colonnade as well as a section of the surrounding wall along today’s Via Cavour. On the attic there is a bas-relief with the figure of Minerva, while the frieze depicts women’s work scenes.

Behind the Temple of Minerva there is a large horseshoe-shaped exedra, the apsidal Porticus, which formed a monumental entrance to the forum.

During the early Middle Ages the Forum of Nerva had a series of dwellings, composed of a ground floor with a portico and a first floor, along a road overlying the original paving of the forum. These dwellings are the only example found in Rome of Carolingian period housing dating back to the mid 9th century AD. Between 1566 and 1572 a large sewer, the so-called “Chiavicone”, was built there to drain and reclaim the area that had become unhealthy. In 1606 the Temple of Minerva, which had been well preserved until then, was destroyed by Pope Paul V to use the reclaimed materials to build the Acqua Paola Fountain on the Janiculum.