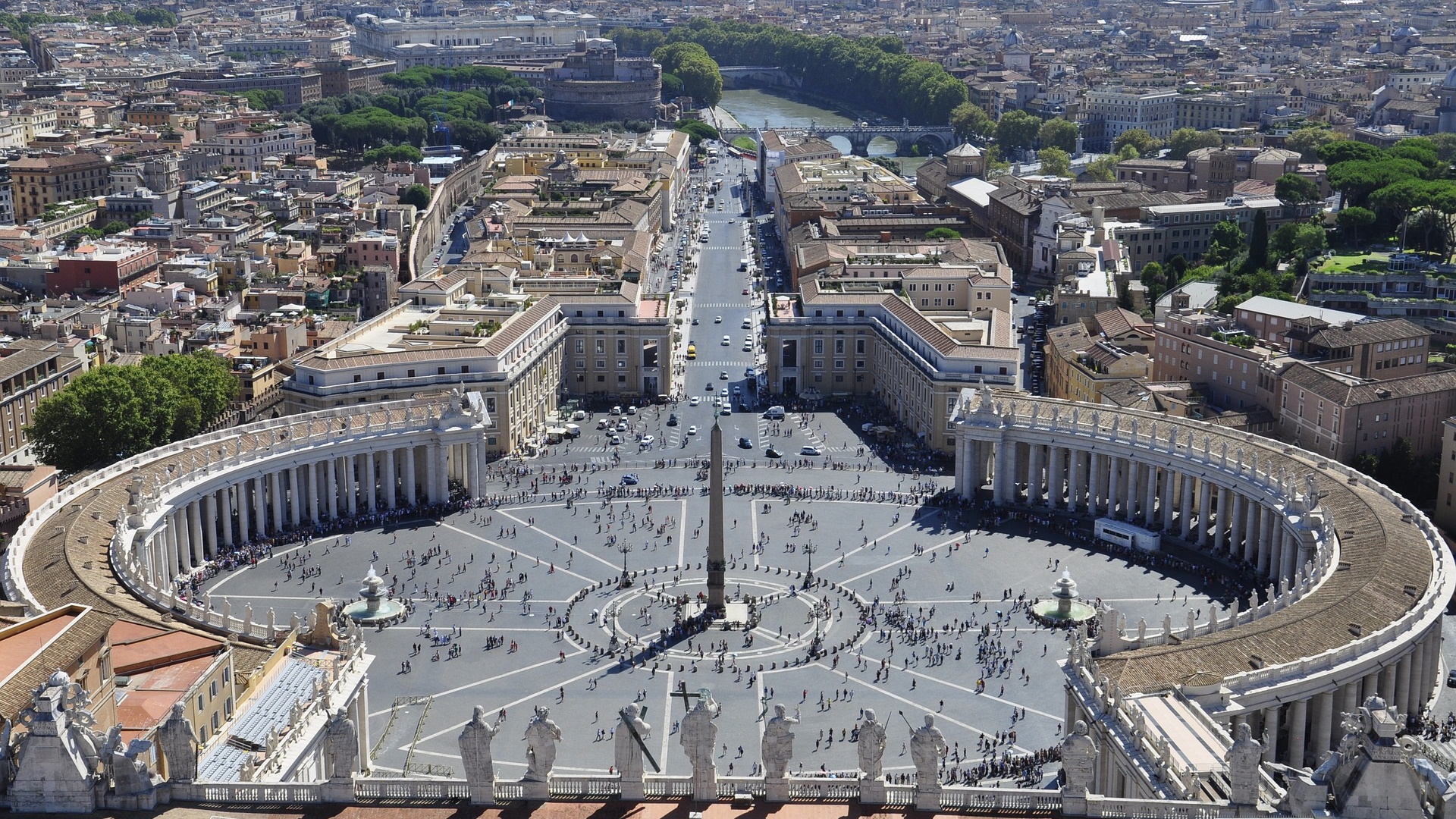 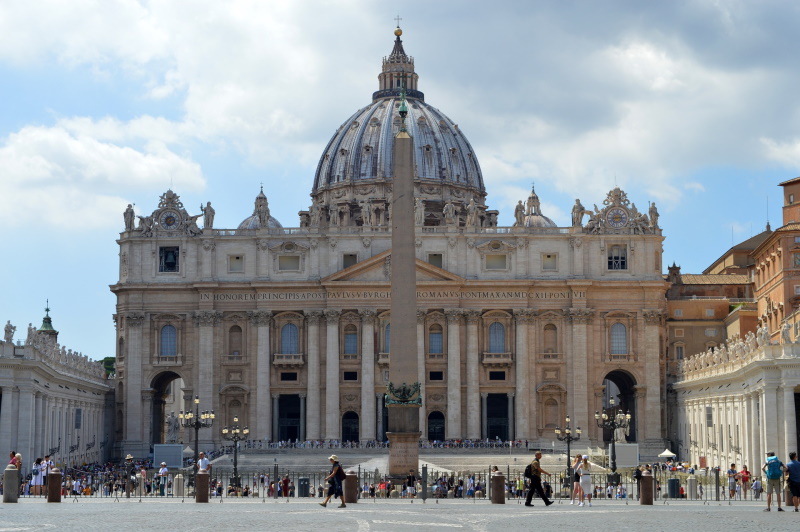 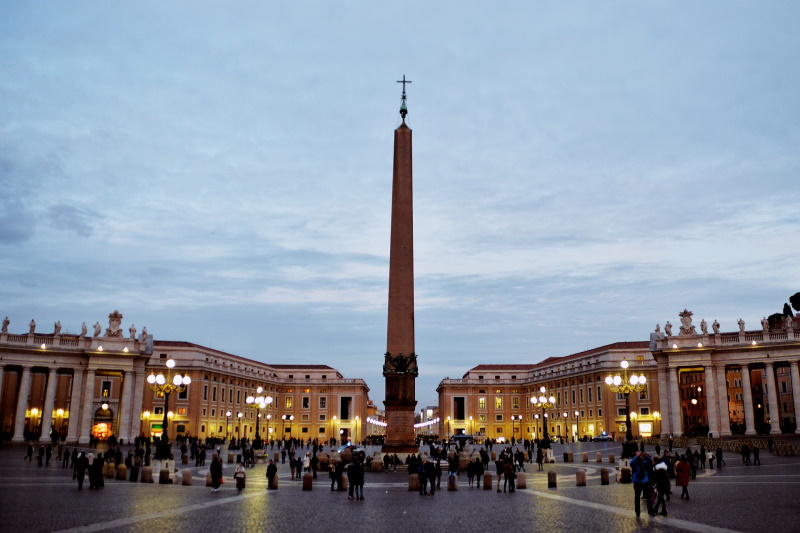 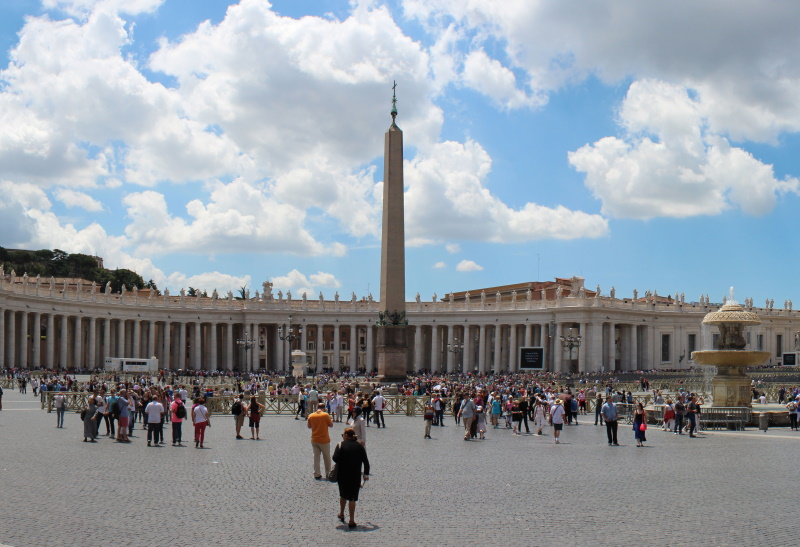 .Located in front of St Peter’s Basilica and the charming Bernini colonnade, the Vatican Obelisk is one of the 13 antique obelisks of Rome.

Carved out of red granite, it rises over 25 meters; with the base and the Cross, it reaches almost 40 meters. It is not the tallest obelisk among those in the city - the primacy belongs to the Lateran Obelisk - but it is perhaps the most important, given the extraordinary scenery in which it stands.

Like the obelisks in Piazza dell'Esquilino and Piazza del Quirinale, the Vatican Obelisk has no decorated sides and bears no inscriptions. Perhaps they were brought to Rome unfinished, directly from the excavation site, or because of the sudden death of the pharaoh who had commissioned them.

Originally it must have reached 45 meters, but it probably broke during its erection, on the orders of Augustus, in the Foro Giulio in Alexandria.

In 37 AD, Emperor Caligula ordered his transfer to Rome, where it stood in the Vatican or Caligula and Nero Circus. According to tradition, many Christians were martyred here, including St. Peter himself. The fact that, unlike the others, this obelisk has always remained standing is attributed precisely to the importance it had for the people who considered it a witness of such mournful events. Plus, its demolition would have risked crashing the buildings around.

From the place of the first Roman location, it moved following the nearby works for the construction of St. Peter's Basilica. After several unsuccessful projects, the transport to the center of the square was carried out thanks to the firm will of Pope Sixtus V, who entrusted the grand plan of raising directly to the architect Domenico Fontana (1543-1607).

The maneuvers proved to be very complicated, and to carry them out, given the substantial weight of the obelisk - 327 tons - Fontana used 900 men and 75 horses who had to work in a religious silence, on pain of death.

During the operations to hoist the obelisk, the now-famous cry of the sailor Benedetto Bresca rang out: "Water to the ropes!". The strings to which the monolith was secured were yielding under its considerable weight, wet with water, they strengthened, and the enterprise was complete. As well as in Domenico Fontana's work "Of the Transport of the Vatican Obelisk" (1590), the phases of the transport are illustrated in a large number of contemporary engravings as in a modern reportage. The audacious project ended before the work on St. Peter's Basilica ended and about 100 years before the colonnade construction by Gian Lorenzo Bernini.

On that occasion, the globe placed on its top - now preserved in the Capitoline Museums - was examined because people believed it to contain Julius Caesar's ashes. Nothing but the dust was inside it. On the sphere, you can still see the marks of arquebuses balls which, in 1527, the Lansquenets shoot at it during the sack of Rome.

The Vatican Obelisk is separated from its base by four lions that recall the coat of arms of Sixtus V, the work of Prospero Antichi, and, unlike the others, it does not rest directly on it. On its top is a cross that surmounts the heraldic symbols of the family of Pope Sixtus V Peretti.

The relocation to St. Peter's Square, which took place without any accident and in a short time, was anxiously followed by the whole population, who, on the last day, brought Domenico Fontana to triumph. The obelisk was erected "in the sunset" on 10 September 1586. 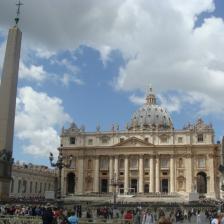 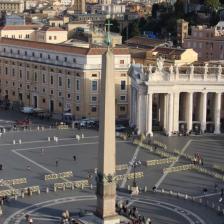 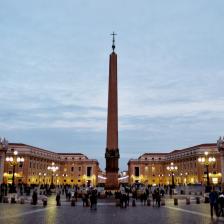 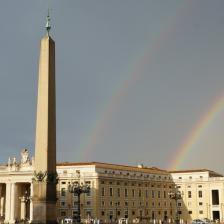 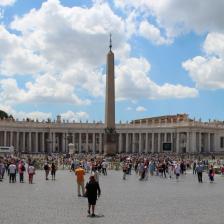