In the Rome of the Popes, starting from the 16th century, people began showing dissent towards established power and ruling classes through anonymous satirical verses. They were placed at night on some Roman statues of the historic centre to be read by passersby the next morning. The statues dated back to different ages and they were used to express in an original way the Roman people criticism. They were "talking statues" with curious names: Marforio, Babuino (the Baboon), Facchino (the Porter), Abate Luigi (the Abbot Luigi), Madama Lucrezia and Pasquino. Often, the statues exchanged biting banters among them, from one part of the city to another.

The most famous one is certainly Pasquino, from which the term "pasquinate" (satyrical verses or poems affixed to the statues). Discovered in Piazza Navona at the end of the 15th century, it is probably datable at the end of the 1st century A.D. The statue is part of a sculptural group from the Roman age, and depicted Menelaus holding up the body of Patroclus who was struck to death by Hector. The sculpture was presumably was part of the sculptural decoration of the Domitian Stadium. It was placed in 1501 by Cardinal Oliviero Carafa in the ancient Piazza di Parione, now Piazza Pasquino, at the corner of Palazzo Orsini, then Braschi. On the occasion of the celebration of St. Mark (25 April), the statue was dressed like a divinity and people used to affix epigrams on it during academic challenges held in the square. The origin of the name is unknown: according to some, Pasquino was a well-known local innkeeper or craftsman, famous for his caustic verses, or a Latin grammar teacher, whose students would have left for a prank the first satirical sheets beside the statue.

In the courtyard of Palazzo Nuovo in Piazza del Campidoglio, leaning against a wall bordering the Basilica of Santa Maria in Aracoeli, there is the imposing Marforio. It is a colossal statue depicting a male divinity, lying on the edge of a tub, with a long beard, a long mantle and a shell in his left hand. The figure is thought to be the embodiment of Oceanus or a river, perhaps the Nera. It was found in the Roman Forum, at the Arch of Septimius Severus, in the 16th century, and is datable from the 1st century AD. According to some, it owes its name for having been found in the temple of Mars (Martis Forum). Marforio was considered Pasquino's interlocutor and support: in some satires, the two statues communicated between them through questions and answers!

In the so-called “Congregation of the Wits”, there is also a female figure: Madama Lucrezia. It is the mighty bust from the Roman age with a disfigured face, about 3 meters high, placed on the corner between the Palazzo Venezia and the Basilica of San Marco, in the square of the same name. The statue probably depicts the goddess Isis, and it was placed in its current position by Cardinal Lorenzo Cybo around 1500. The popular name of Madama Lucrezia is of uncertain origin: it probably comes from Lucrezia D'Alagno, a friend of Alfonso of Aragon and Pope Paul II, or from the wife of Giacomo dei Piccini, who had properties in the square, as attested by a document dating 1536.

Near the Church of Sant'Atanasio dei Greci, there is the statue of a silenus lying on its side, renamed Babuino (baboon) because of its ugliness and resemblance to a monkey. Located in the street of the same name, it is part of a fountain, originally leaned against the main facade of Palazzo Grandi. In 1738, due to restoration works, the statue was moved to the left of the building and placed in a niche. In 1877, the fountain was dismantled and the silenus placed in the internal courtyard of the building. In 1957, the statue and the tank were brought together again and used as a fountain, placed in a new position not far from the original one. The Babuino came to compete with the most famous Pasquino, so much that its comments were called "babuinate".

In Via Lata is the most recent talking statue, depicting a character who existed, called Facchino. It represents a porter holding a barrel from which the water comes out, with the typical 16th-century dress of those who filled barrels with water drawn from the Tiber or of the ancient Trevi fountain, to distribute it during the day. The statue, inserted in a small fountain, was made by the sculptor Jacopo Del Conte at the end of the 1500s. At night, its face was disfigured since people thought it resembled Martin Luther.

The Abbot Luigi is a Roman statue from the late imperial era, depicting a man with toga, perhaps a magistrate, without the head. After numerous repositionings, the statue is currently located in Piazza Vidoni, next to the church of Sant'Andrea della Valle. The name seems to derive from the similarity with a witty sacristan of the nearby church of SS. Sudario. 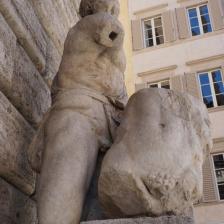 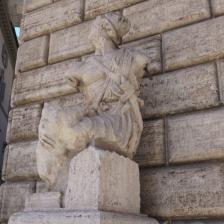 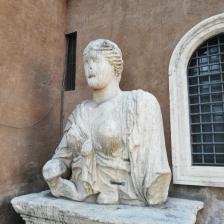 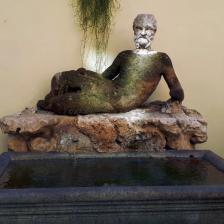 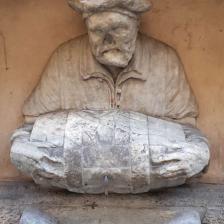