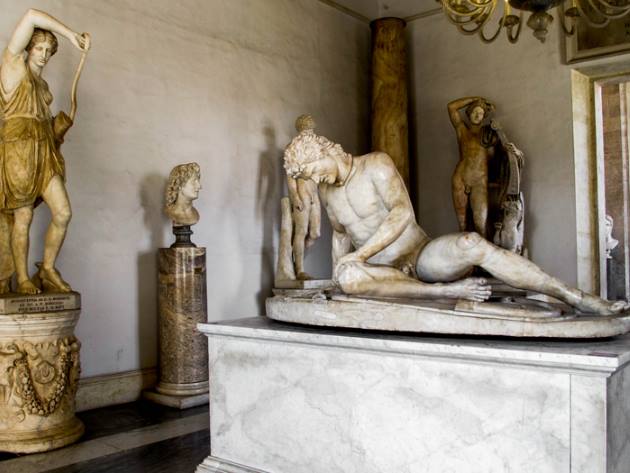 The 17-century Palazzo Nuovo stands opposite the identical Palazzo dei Conservatori, on the splendid Piazza del Campidoglio, designed around the mid-16th century by Michelangelo, commissioned by Pope Paul III, and dominated in the background by Palazzo Senatorio.

The construction began in 1603, based on a project by Buonarroti, and was completed only in 1654 by Girolamo and Carlo Rainaldi, under Pope Innocenzo X Pamphilj. House to the ancient statues that had no place in Palazzo dei Conservatori, Palazzo Nuovo officially became a museum in 1734, under the pontificate of Clemente XII Corsini. The previous year, the pontiff acquired the prestigious Albani Collection - 418 sculptures - which was added to the artworks already in the museum, along with the sculptures that continued to enrich the collection year after year.

In the courtyard is the colossal statue of Marforio that, together with the more famous Pasquino and others, is one of the "talking statues" of Rome, sculptures from different periods on which the Roman people showed their dissent towards the ruling classes through anonymous satirical messages.
The atrium is characterized by false doors, with columns leaning against the walls, and large niches - framed by Roman epigraphs - with statues, such as the colossal ones of Mars ("Pirro") and Minerva, the emperor Hadrian and the empress Faustina Maggiore.

Inside, the building had a symmetrical spaces organization. The decoration of the halls on the main floor has remained substantially unchanged over the centuries, with wooden ceiling coffers embellished with gilding; the collections have also been adapted to it, still set according to the 18-century exhibition concept.

The museum keeps precious classical works, finds from the Iseo Campense -the most important sanctuary in Rome dedicated to the Egyptian gods - portraits of emperors, empresses or people of the Imperial age, busts of poets, philosophers and orators of Ancient Greek, and remarkable epigraphic documents and sarcophagi.

Among some of the remarkable sculptures, it is possible to admire the splendid Leda with the Swan, the famous statue of the Capitoline Gaul, the sculptural group of Cupid and Psyche, the famous Torso of Discobolus restored as a wounded warrior, and the marvellous Capitoline Venus, exceptionally well preserved.
Of particular interest is the Lex de Imperio Vespasiani, a large bronze table with part of the law with which the Senate conferred power on Emperor Vespasian in 69 AD.

Opening times as for the Musei Capitolini.