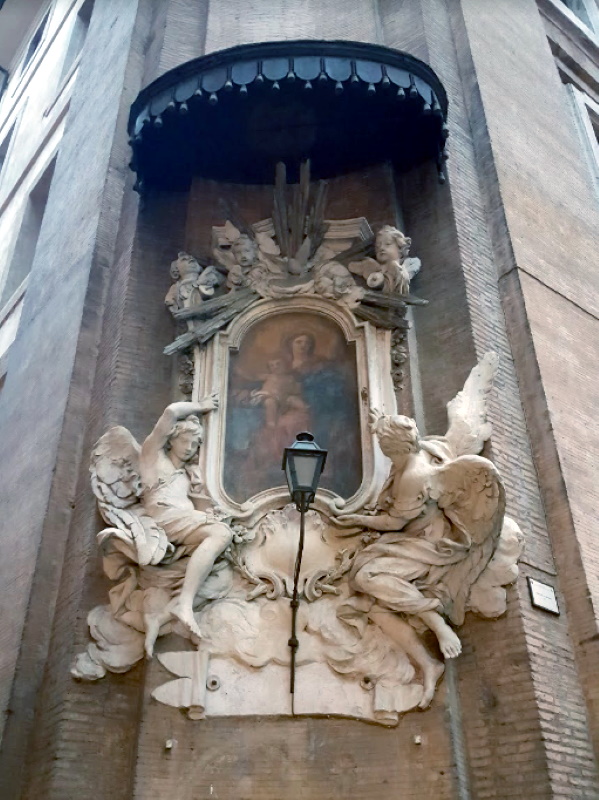 Located a few steps from Piazza Navona, the square takes its name from the clock of the tower of the Convent of the Filippini, built by Borromini (1559-1667), between 1647 and 1648. In its concave section, placed under the clock, there is the beautiful mosaic of the Madonna della Vallicella, from a drawing by Pietro da Cortona.

Piazza dell’ Orologio, formerly known as Piazza dei Rigattieri, and then Piazza di Monte Giordano, also houses Palazzo Bennicelli built at the behest of Monsignor Virginio Spada, commander of the Banco di Santo Spirito. Monsignor Spada intended to assign it to the Banco, but the ministers of the institution considered the location inadequate as it was geographically too far outside the usual business circuit. However, the works began in 1660 and were entrusted to Francesco Borromini.

In 1662, at the death of Virginio Spada, the Banco ministers moved the new bank headquarters to the building that is still known as Banco di Santo Spirito. One of the Monsignor's heirs, Marquis Orazio Spada, purchased the unfinished palace for a large sum and had the works completed by Borromini.

At the end of the 19th century, the palace was purchased by the Counts Bennicelli, whose name it bears, who entrusted the restoration to the famous architect Gaetano Koch. He gave the building its current appearance, transforming the 17th-century facade by Borromini into a modern key.

Palazzo Bennicelli, however, is known above all because it was the home of Count Adriano Bennicelli, better known as Conte Tacchia, whose name derived from the activity of the family who traded timber. In the Roman dialect, the "tacchia" is a splinter of wood.

The Count was famous for his elegance, for his original way of life and for his carefree behavior. The 1982 film by Sergio Corbucci, Il Conte Tacchia, has also contributed to passing on his fame to us. It tells about his deeds through the brilliant interpretation by Enrico Montesano.

He used to walk the alleys and squares of the historic center aboard carriages pulled by 2 or 4 horses, but you had to be ready to make his way, otherwise slaps and bad words flew, often followed quarrels and complaints.

A canopy with fringes and pendants, on the corner of the building between Piazza dell' Orologio and Via del Governo Vecchio, overlooks a valuable Madonna with the Blessing Child, a 1756 fresco by the painter Antonio Bicchierai, whose opulent stucco frame is, instead, attributed to the sculptor Tommaso Righi.