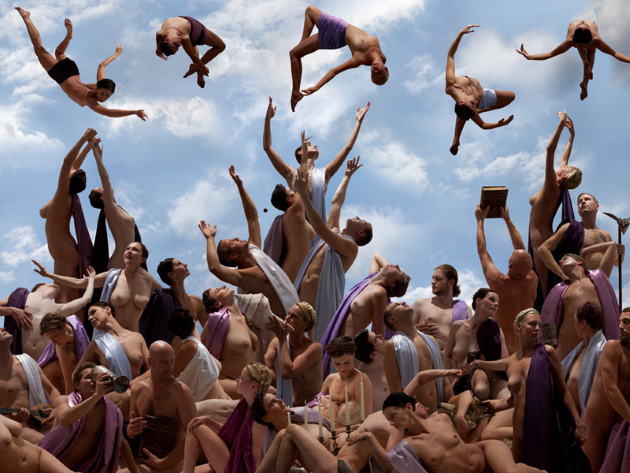 Inside the splendid 17th-century building renovated by the archistar Jean Nouvel and wedged between the Bocca della Verità and the Arco di Giano, rhinoceros gallery and Fondazione Alda Fendi - Esperimenti celebrate their twenty years of activity by reopening to the public with an ambitious, engaging and immersive exhibition project in the name of Dante Alighieri. The exhibition was born on the occasion of Dante’s celebrations for the seven hundred years of the his death and presents a visionary and at times psychedelic reinterpretation of the Divine Comedy through the intertwining of the photographic project “EverAfter” by Claudia Rogge and the installation “DANTE. In a private dream of Raffaele Curi”.

Visitors are welcomed by large photographs by the German artist Claudia Rogge: complex scenes of great visual impact, animated by dozens of crowded figures, through which the three kingdoms of the afterlife are represented with images that seem inspired by ancient painting. The imposing multimedia installation proposed by Raffaele Curi, artistic director of the Foundation, is instead an original reinterpretation of the forest of suicides described in Inferno Canto 13: a “rock work on a radioactive Dante”, which invites us to reflect on the 20th century nuclear disasters and emphasizes environmental and ecological issues and the impact of man on the life of the planet. The installation culminates in the Paradiso, with the reproduction on a monitor of a famous miniature by the 15th-century Tuscan painter Giovanni di Paolo di Grazia: a sort of celestial space accessible by only one spectator at a time, so dazzling as to make it advisable to use sunglasses.

The exhibition also sees the collaboration of the Accademia della Crusca, with the project “La parola di Dante fresca di giornata” to which a special space is dedicated in the rhinoceros gallery: every day, on its Instagram profile, the Accedemia will share with the public of the network an expression, a neologism, a Latinism, a Dante’s onomatopoeia, accompanied by a brief comment.