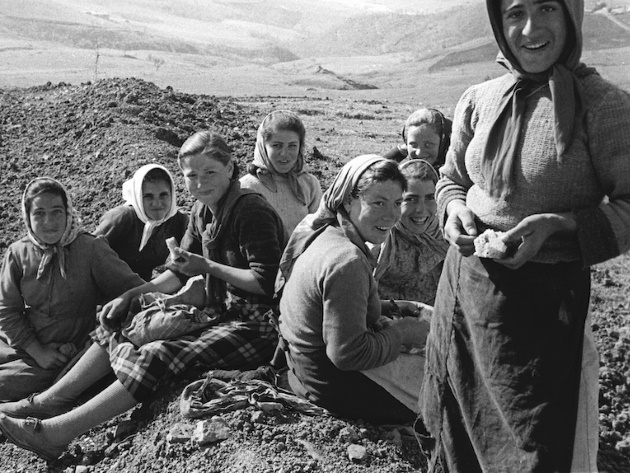 I am a documentary photographer with a point of view. I prefer ordinary things—things that are not officially important. While recording the everyday world I often look for the exotic in ordinary situations and for the ordinary in what many people see as exotic. I hope you will find this in some of my photos and enjoy it. My passion for photography began as a teenager in the late 1940s. In the intervening years my work as a sociocultural anthropology professor has often taken over for months, sometimes years, at a time. Frank Cancian

For the first time in Rome, a significant selection of over 100 photographs taken by Frank Cancian in 1957 in Lacedonia, in the province of Avellino. The shots represent the multiple aspects of the social life of this small community to which the author wanted to return the 1801 pictures taken at the time and today preserved at the MAVI - Museo Antropologico Visivo Irpino - in Lacedonia.

Frank Cancian, then a very young Fulbright researcher, later an established professor of Cultural Anthropology in American universities, has carried out an extraordinary study of the community through photography in the Irpinia country: one of the most relevant fruits of the commitment of American social sciences in our country in the 1950s and 1960s.

Great black and white shots that tell, with extraordinary vigor, the social and cultural reality of the country in 1957. The images on display, many of which in large format, were printed exclusively for the exhibition from original negative with traditional methods and are accompanied by other materials such as specimen sheets and reproductions of the author's notes and notebooks.

Along with the exhibition, you can watch the documentary 5x7 - il paese in una scatola, by Michele Citoni, reconstructs Cancian's trip to Italy in 1957 and his new meeting with the Lacedaemonian community, which took place 60 years later.