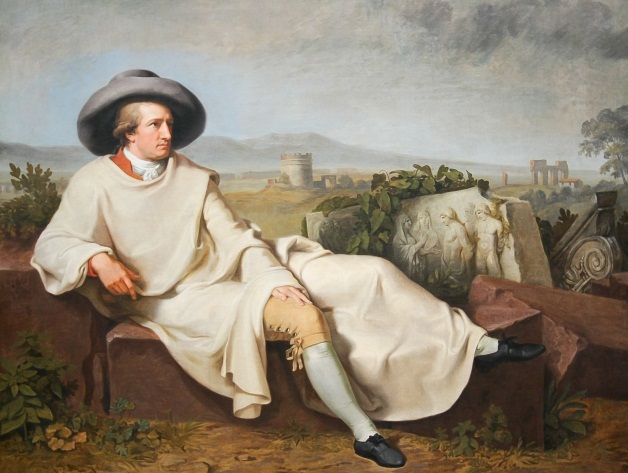 Over the centuries, Rome has been a favourite destination for novelists, painters, poets and musicians. During the Grand Tour, they completed their cultural formation, seeking inspiration from the ancient remains and Renaissance works of art.

Historic hotels, refined palaces and private homes, over time, the historic centre welcomed numerous illustrious personalities. To remember their presence, we have commemorative plaques and extraordinary works, such as Goethe's "Travels in Italy" - a tribute of love to the Eternal City - or the suggestive Stendhal's "Roman Walks".

The 17-century palace of the Grand Hotel della Minerva, in Piazza della Minerva, is the place chosen by some of the most famous European artists: the French writer Marie-Henri Beyle, known as Stendhal, stayed here between 1814 and 1816, and Herman Melville, author of "Moby Dick", in 1857.

In Piazza della Rotonda, you are in front of the “most beautiful relic of ancient Rome", as Sthendal described the Pantheon. It is here that the exclusive 15-century Albergo del Sole stands. It is the oldest one in the city and hosted Ludovico Ariosto, Pietro Mascagni, and, more recently, Jean-Paul Sartre and Simone de Beauvoir, the famous couple of philosophers.

The musician Pietro Mascagni and the two great statesmen of the 20th century, Charles de Gaulle and Winston Churchill, were some of the guests of the Grand Hotel Plaza in via del Corso, an ancient inn and later a meeting place for nobles, artists, politicians and rulers. "Rome is the capital of the world! In this place, the entire history of the world is linked, and I count on being born a second time, of being truly risen, the day I set foot in Rome. Its beauties have raised me little by little to their height", wrote Goethe in 1787. At number 18 of the same street is Goethe House, where the poet lived with the painter Tischbein. Today it is a small museum keeping letters, books and drawings, dedicated to the relationship between the artist and the city.

At number 79 of the refined Via del Babuino, a few meters from the Fontana del Babuino, one of the talking statues of Rome, were the prestigious "Albergo d’America" ​​and Albergo “Grande Bretagna”: here the great German composer Richard Wagner stayed.

In via Bocca di Leone 14, today an iconic street of luxury and fashion brands, the composer Franz Liszt lived in the aristocratic Albergo d'Inghilterra, originally the residence of the Torlonia princes. Few steps away, the magnificent Piazza di Spagna houses the house museum where John Keats, who died here at the age of 25, and Percy Shelley lived. In the charming 18th-century building, in front of the Barcaccia Fountain, everything has unchanged in the facade and interior: it is a real temple of the romantics and great English writers inspired by them.

Ferdinand Gregorovius lived in Rome for many years. He received honorary citizenship in 1876, thanks to its "History of the city of Rome in the Middle Ages". The German historian initially lodged in via di Pietra 89, a few steps from the square of the same name, dominated by the majestic Hadrian's Temple and, later, in via Gregoriana 12. On the opposite side of the street is the house of the first Roman stay of the French painter, Jean Auguste Dominique Ingres, one of the greatest Neoclassic artists.

Our last stop is via Sistina, the elegant street full of artist's memories. At number 48, the Danish sculptor, Bertel Thorvaldsen, stayed; at 113, the Hungarian composer, Franz Liszt; at 126, from 1838 to 1842, the Russian writer, Nikolai Gogol. Hans Christian Andersen lived at number 104: here, in 1835, the Danish poet and writer gave life to his first novel, "The Improviser".