Seven Nativity artworks: a gaze at the sacred heart of Rome

Since ancient times, a special bond has always been between the sacred and the soul of the city: in the first stone of the church founded by the apostle Peter, in the history of its Christian catacombs, in its thousands of splendid churches.

The Nativity of Christ is one of the great artistic and spiritual testimonies depicted in paintings, sculptures, mosaics and frescoes created, over the centuries, by the genius of those arrived in Rome, loved it, chosen it as the ideal city for arts and symbol of eternal beauty.

Let's discover together seven precious artworks - kept in churches and museums - by seven great artists who left us their legacy, the "images" of an ancient event seen through their eyes, giving us an experience of styles, lights, colours and emotions.

#1 Nativity by Pietro Cavallini
The "most learned among all the other masters" as Lorenzo Ghilberti called Pietro Cavallini, the artist who - between 1291 and 1296 - gave life to the splendid mosaics depicting the "Stories of the Virgin". The work is kept in the apse of the Basilica of Santa Maria in Trastevere, the first place dedicated to the cult of the Virgin and heart of Trastevere district. The evocative scene of the Nativity is part of the six mosaics with Byzantine references: on a golden background, inside a cave, Mary is lying in the centre of the representation, while Joseph is in a corner, absorbed; next to the virgin is Infant Jesus, wrapped in swaddling clothes, in a square-shaped cradle, and nearby, the ox and the donkey. Above, a bright star, and at the sides of the cave, some angels and a shepherd. The deep colours, the surprising shades of chiaroscuro and the numerous details, including the animals on the scene, characterize the wonderful composition. The work is one of the numerous artistic and architectural masterpieces of the Basilica, such as the sumptuous carved and gilded ceiling with polychrome backgrounds, designed by Domenichino, and the 13th-century Cosmatesque style floor.

#2 Nativity with Saint Jerome by Pinturicchio
Between 1488 and 1490, Bernardino di Betto Betti, known as Pinturicchio, decorated the Chapel of the Nativity - also known as Della Rovere - of the Basilica of Santa Maria del Popolo, in Piazza del Popolo. Under the starry blue vault of the suggestive site, in the centre of the refined fresco is the Holy Family depicted together with the saint near the hut, with the adoring shepherds on the right and the ox and donkey on the left. In the background is a landscape illuminated by the morning light, and above, an angel announcing the arrival of the Magi. The basilica, one of the most relevant buildings of the Roman Renaissance, preserves numerous artworks and funerary monuments, such as the Chigi Chapel - designed by Raphael and completed with the intervention of Gian Lorenzo Bernini - and the Cerasi Chapel with masterpieces by Caravaggio and by Annibale Carracci.

#3 Nativity with Angels by Francesco Mazzola known as Parmigianino
The "sfumato" lines and the vivid and dense colours are the characteristics of this splendid painting made by the painter from Parma in 1525. The Holy Family is in a hut with an open vault: Mary, lovingly holding her son, and Joseph adoring, with his gaze, however, addressed to a child who raises his arms towards an angel; in the background, two elderly and bearded figures seem to talk about the event. Paired with the "Madonna and Child", with which it formed a diptych, the work is in the Doria-Pamphilj Gallery, in the sumptuous palace of the same name in via del Corso, which for centuries has housed a private collection with masterpieces by the likes of Caravaggio, Titian, Raphael, Carracci, Bernini and Velázquez.

#4 The Nativity by Arnolfo di Cambio
This sculptural group is the first inanimate nativity scene in history and was commissioned to the brilliant Tuscan sculptor, who improved himself at the Workshop of Nicola Pisano, by Pope Nicholas IV in 1288. Simple and elegant, the work is composed of five marble figures: Joseph, Mary with the Infant Jesus in her arms, the Magi - two standing in a single block and one kneeling - the ox and the donkey. The wonderful composition is kept in the Sistine Chapel of the Basilica of Saint Mary Major, symbolically the "Bethlehem of the West" and also known as Sancta Maria in Praesepium for the sacred relics of the cradle of Child Jesus there guarded.

#5 Nativity of Christ by Francesco Mancini
In the history of the Roman Church, the Basilica of Saint Mary Major has a really moving origin: it is related, in fact, to the legend of the snow miracle, recalled every 5th August, and is the only basilica to have preserved its paleochristian structures. Besides the suggestive Nativity scene by Arnolfo di Cambio, it houses artworks of immeasurable value. Among these, the beautiful painting by Francesco Mancini.
The warm and engaging colours and the typically Baroque style characterize this 1750 painting: the Holy Family looks outwards and, at the foot of the modest manger covered with hay, there are some shepherds in prayer, including a child who indicates the Infant Jesus to his mother. Above, angels and cherubs joyfully announce the event. The work is placed below the magnificent late 13th-century mosaics by Jacopo Torriti, in the apse of the imposing basilica.

#6 Adoration of the Magi by Raffaello Sanzio
The amazing painting is part of the predella of the Altarpiece of the Crowning of the Virgin, created by the young Raphael between 1502 and 1504, which illustrates three episodes from Christ's infancy. Against the nuanced and natural landscape of the background, is the crumbling hut of the Nativity - in wood and bricks - with St. Joseph standing and the Virgin Mary holding the naked Infant Jesus on her knee, offering him to the devotion of the Magi. All around are depicted servants, adoring men, saddled horses, a black dog. The genius of the master from Urbino is beautifully expressed in this work of only 27 x 50 cm through the rich details and brilliant colours. The masterpiece is displayed at the Vatican Pinacoteca, which houses about 460 works by major Italian artists.

#7 Nativity by Giovan Battista Montano
The marvellous early 17th-century relief depicting the Nativity shines in the centre of the precious gilded wooden ceiling of the Church of San Giuseppe dei Falegnami in the Roman Forum, on a design by Montano himself. In the scene, under the polygonal roof of the hut surrounded by flying angels with the scroll of Glory, the solemn figures of the Virgin Mary, St. Joseph, a shepherd and the realistic heads of the ox and the donkey are carved. At the corners of the external frame, there are four angelic figures, and two other smaller reliefs depict St. Joseph with the Child and the Holy Family. After the collapse of the roof on 30 August 2018 - crushing the ceiling against the floor - thanks to the timely and accurate restoration, Montano's work has returned to shine, a symbol of rebirth and greatness of art. 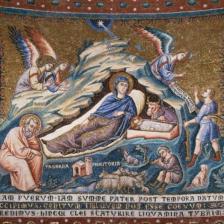 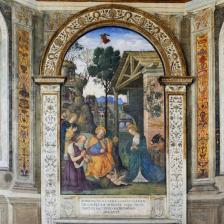 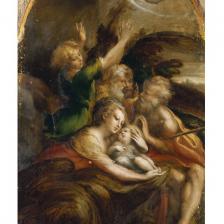 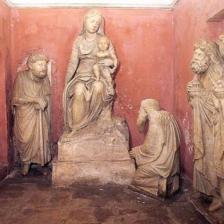 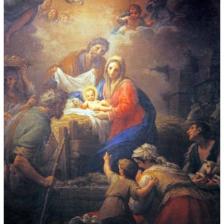 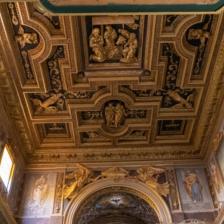