Would you decide to arrive by car, for those arriving from the North, the best way to reach the capital is via the Milan-Rome A1 motorway.

Those coming from the West of the country should instead take the Aurelia State Road and then the Civitavecchia-Rome A12 motorway.

From the Adriatic Coast, the best route is via the Aquila-Rome A24 motorway.

Finally from the South, the Naples-Rome A1 motorway should be taken. Every motorway joins up with the “Grande Raccordo Anulare” (or G.R.A.-Rome Ring Road) with all exits for the centre and Rome’s suburbs.

Main streets from the “Grande Raccordo Anulare” (or G.R.A.-Rome Ring Road):
-Via Aurelia (ss1) towards North from the Vatican to the Tyrrhenian Cost, Pisa, Genova and France.
-Via Cassia (ss2)  towards North-West from “Ponte Milvio” to Viterbo, Siena and Florence.
-Via Flaminia (ss3) towards North-East until Terni, Foligno, the Apennines and the Adriatic coast.
-Via Salaria (ss4) towards North from “Porta Pia” to Rieti, Marche Region and the Adriatic Coast.
-Via Tiburtina (ss5) connecting Rome to Tivoli and Pescara.
-Via Casilina (ss6) towards South-East going passed Anagni heading to Campania Region.
-Via Appia Nuova (ss7) South towards Ciampino airport, Castelli Romani, Campania Region, the Apennines, Basilicata Region, Taranto and Brindisi in Puglia Region.
-Via Ostiense (Via del Mare=Route of the sea) (ss8) South-west towards Ostia.
-Via Cristoforo Colombo from “Porta San Sebastiano” towards EUR and Ostia.

PLEASE NOTE: Especially signed-posted Limited Traffic Zones are in place in the historical centre of the city: special permits, issued by Atac, The Capital’s Public Mobility Agency, are requie in order to drive through these areas. Special road signs as well luminous displays mark the entrances to these zones. 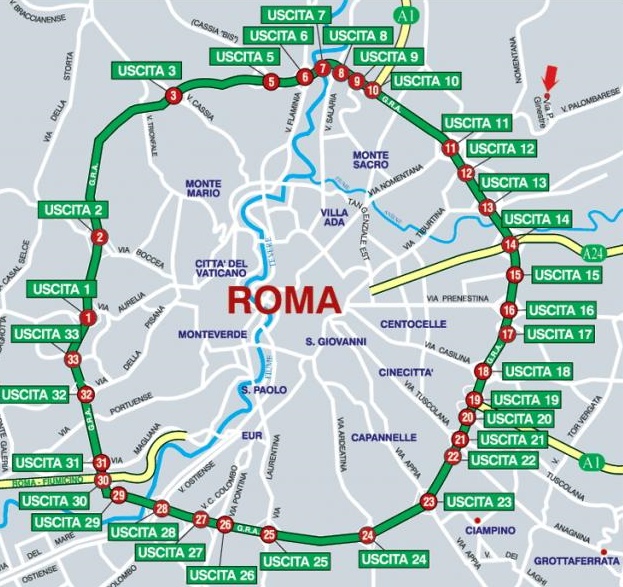