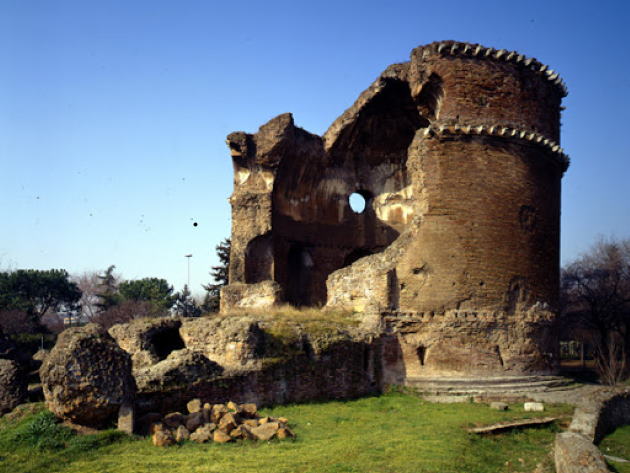 The park of Villa Gordiani along the Via Prenestina gets its name from three Roman emperors from the 3rd century AD and it is home to several impressive ancient ruins, including a mausoleum and an early Christian basilica.

The mausoleum is a round funerary building in brickwork, organized in two levels. The upper floor, surmounted by a vaulted dome, was intended for funeral ceremonies. The walls were adorned with frescoes, now almost completely disappeared, while four circular oculi at the base of the dome gave light to the area. The lower floor, used as a funeral room, consists of an annular corridor with a barrel vault which, in the center, rests on a robust central pillar. The sarcophagi were placed in the niches along the walls. The area is illuminated and ventilated by vertical slits located just above the ground level. On the facade there was a portico preceded by a staircase, facing the Via Prenestina, both collapsed in the mid-18th century. The mausoleum dates back to the Diocletian age (4th century AD) or to a later period, as evidenced by the presence of imperial stamps of that era, imprinted on the bricks of the building, and the comparison with other similar monumental complexes such as the Mausoleum of Helena on Via Casilina or the Mausoleum of Costantia on Via Nomentana.

A short distance from the mausoleum there are the remains of a basilica with a circus-shaped plan, similar to the so-called “ambulatory” Christian basilicas, for example those of Saints Marcellinus and Peter and of Saint Sebastian, built near the tomb or the memory of the martyr. The ruins consist of some pillars with arches and the perimeter wall that draws a plan about 67 meters long. At the beginning of the 1980s, archaeological excavations were carried out to clarify its chronological location within the 4th century AD, its possible relationship with the mausoleum and its Christian character. The investigations have not provided precise answers but have revealed a series of graves dating back to the early Middle Ages, inside and outside the perimeter of the basilica.

On the eastern part of the park, along the Via Rovigno d’Istria, a small two-storey catacomb was found in 1953, excavated in the outcrop, extremely simple, with burial niches and a couple of arcosolia. At the moment is not possible to establish if the structure is pagan or Christian.

Visitable from the outside