The Mausoleum of Sant'Elena | Turismo Roma
Skip to main content

The Mausoleum of Sant'Elena 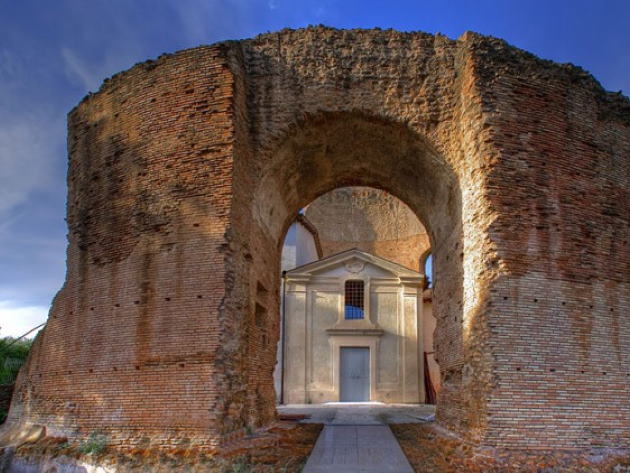 The monument is located in the region once called “ad duas lauros”, crossed by the via Labicana, today via Casilina.

It probably owes its name to the presence of two laurels, evidence of the presence of a wood, or the decoration of laurel branches on the walls of a villa, maybe that of the Christian Flavians, chosen as a home by the empress Helena.

In this area, part of the imperial estate, was also the cemetery of the Equites Singulares, Constantine's imperial escort units.

After his conversion, around 320 AD, Constantine built a basilica dedicated to the saints Marcellinus and Peter, buried in the nearby catacombs.

Between 326 and 330 AD, beside the eastern facade of the basilica, the circular mausoleum surmounted by a vault was built. It was probably used as a funerary monument for the emperor and the imperial family, and then used for the burial of Saint Helena, mother to Constantine.

The monument is commonly called Torpignattara, for the presence of the amphorae (pignatte) that compose the concrete of the vault, in order to lighten the weight of the casting.

It is formed by a two-level cylinder: in the lower one were eight alternating rectangular and circular niches, one of which was the entrance. In the other niches, were the sarcophagi. Saint Helena’s sarcophagus was located in the biggest niche.

After being moved in the Lateran by Anastasio IV (1153-1154), Helena's sarcophagus was moved to the Vatican by Pius VI (1775-1799), and today it is placed in the so called “Hall of the Greek Cross” in the Vatican Museums. The body of Saint Helena was, instead, laid in the XII century in the church of Santa Maria in Ara Coeli.

The red porphyry sarcophagus presents a decoration with war scenes, which let us think that in origin it was not intended for Helen but for her son Constantine or her husband Constantius Chlorus.

The upper cylinder, accessible via a stair between two niches, had eight windows by the lower niches. The walls were covered with marble blocks and there was an altar to celebrate the masses for the repose of Saint Helena.

During the Middle Ages, the mausoleum was used as a fortress and a dwelling, as proven by some 16th century documents.

In 1632, Pope Urban VIII build inside it a little church devoted to the Saints Marcellinus and Peter.

Eventually, under Pius XI, a modern church was built beside the monument and devoted to the saints.