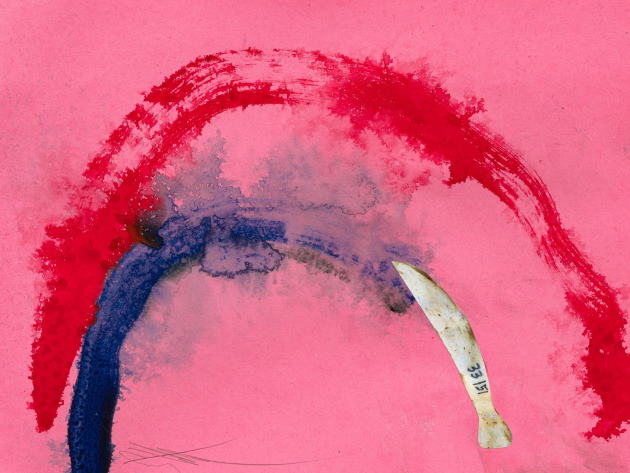 Born in 1972, the American artist Sterling Ruby has exhibited in the city before at venues including the MACRO museum and Fondazione Memmo. In his first exhibition at the Gagosian gallery, he presents new sculptures and collages that invite us to reflect on the perils of environmental deterioration and our acceleration toward ecological collapse.

Six large and bright monochromatic droplets are supported by Formica pedestals. The perfection of their pristine forms is however interrupted by the engravings and writings on the pedestals, which refer to the material that inspired each single work: blood, water, urine, oil, water, “total carbon,” and “greenpeace”. Installed in the gallery’s ovoid space, these forms coalesce as a chorus representing the breadth of spheres affected by or further propelling environmental demise.

An accompanying suite of small collages from the ever-evolving series DRFTRS (2013–) (the title is a shortening of drifter) features watercolor paintings of rainbows punctuated by photographic images of bones clipped from archeological magazines. The collages in the series are both analytical and emotive, again combining social comment with formal experiment. Inspired in part by the ruins of ancient Rome, the  collages and the exhibition as a whole manifest Ruby’s continued interest in archeological excavation, in the cyclical nature of humanity, and in all that we may still glean from that which is otherwise lost to time.

A special installation by Sterling Ruby is also visible in the Toletta di Venere of the Galleria Doria Pamphilj museum from 20 November to 19 December 2021.