Located in the city center on Piazza dei Cinquecento, between Via Marsala and Via Giovanni Giolitti, Termini Station plays a role of primary importance in the city's regional, national, and international transport system. With its 225,000 square meters and approximately 850 trains a day, every year transports 150 million travelers.

Built in 1867 on a project by the architect Salvatore Bianchi, between the fields and vineyards that then populated Rione Castro Pretorio, it seemed too large for the needs of the Capital of the Papal State, which then had just over 180,000 inhabitants. A few years later, however, it was already insufficient for the needs of a rapidly growing population.

Thus began the necessary extension interventions with the addition of temporary tracks and sheds. However, until 1905, the main building retained its original dimensions.

In 1925, the architect Angiolo Mazzoni designed a new extension for Salvatore Bianchi's old building. After numerous changes, the final project was approved on 3 February 1939. It saw the construction of a monumental forepart, an imposing Portico, and a 12 thousand square meter empty atrium, which had the sole intention of amazing the travellers. The side bodies, on the other hand, were intended for travel services.

As for the interior decorations, Mazzoni wanted to represent Italy with the precious national marbles that we can still admire today, such as the gigantic Mazzonian hood, a rare example of futurist architecture, visible in the homonymous wing of the station.

The outbreak of the Second World War interrupted the works. At the end of the war, the project was re-examined in affordability and functionality rather than monumentality. In 1947, therefore, a new contest was launched whose winners, the Montuori Vitellozzi group, would complete Mazzoni's work. The iconic canopy called "dinosaur" was also built. It is a structure with neat and modern lines perfectly fitting with the ancient defensive walls, namely the Agger Servianus, located on the side of Via Marsala. The station was inaugurated on 20 December 1950.

At the end of the works, Termini Station assumed the shape we know today: a mix of styles between the Thirties and the Fifties, integrated with modern interventions.

Inside the station, you can find Forum Termini, a service center of 14,000 square meters, with a wide choice of shops and products for all tastes. The Central Gallery, the pedestrian link between Via Marsala and Via Giolitti, offers ideas for shopping, restaurants, and fast food. 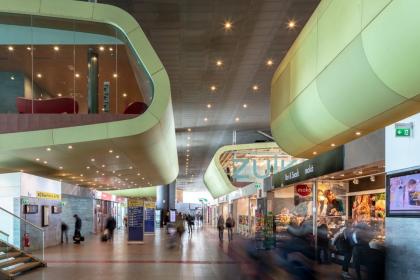 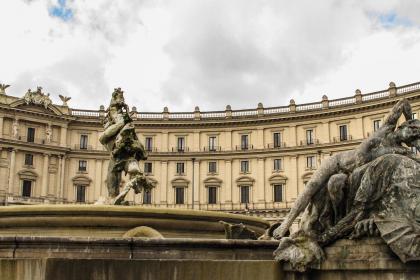