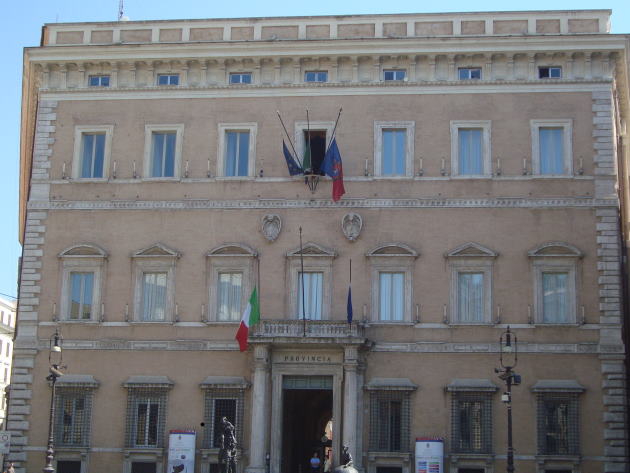 The palace, now the seat of the metropolitan city of Roma Capitale, was built in 1583-85 by Cardinal Bonelli on the area of the forum of Trajan, designed by Domenico Paganelli from Florence. In the mid-seventeenth century, it became the property of Cardinal Imperiali, who had it rebuilt and enlarged on a project by Francesco Peparelli.

In the early eighteenth century the palace was rented to illustrious personalities of the time. Among these, the Marquis Francesco Maria Ruspoli who lived there between 1705 and 1713 hosting for a long time famous musicians such as G.F. Haendel, Alessandro Scarlatti and Arcangelo Corelli. In 1827 the building was purchased by the banker Vincenzo Valentini, who established his home here, promoting the completion of the works on the side overlooking the Trajan Column, built by the architects Filippo Navone and Giovanni Battista Benedetti. Between 1861 and 1865 his son Gioacchino commissioned the execution of the two distinct buildings, designed by the architect Luigi Gabet who completed the side along via di Sant’Eufemia. In 1873 the palace was purchased by the Italian State as the seat of the Province of Rome.

The building, with a trapezoidal plan with entrance hall and central courtyard, has a facade with a majestic portal with two Ionic columns surmounted by a balcony; on the sides there are architraved windows with railings. The windows on the first floor have triangular gables, while those on the second windows have a simple frame. A cornice supported by shelves alternating with windows acts as a crowning on all sides of the building. In the courtyard and staircase there are some classical sculptures, on the second floor a large coat of arms of Cardinal Bonelli in polychrome majolica tiles from the end of the 16th century.

The vast art collection of the palace includes the statue of Ulysses by Ugo Attardi, the collection of paintings and antiquities that belonged to the banker Valentini, along with the most recent works, Enea and Anchise and Europe, made by Sandro Chia on the occasion of the 135th anniversary of the birth of the Province of Rome and located at the entrance of Palazzo Valentini. The underground excavation campaign that began in June 2005 brought to light a residential area consisting of domus with rich decorative structures dating back to the late 2nd-3rd century AD. From 2016, the new archaeological area of the “Domus Romane” was therefore established.