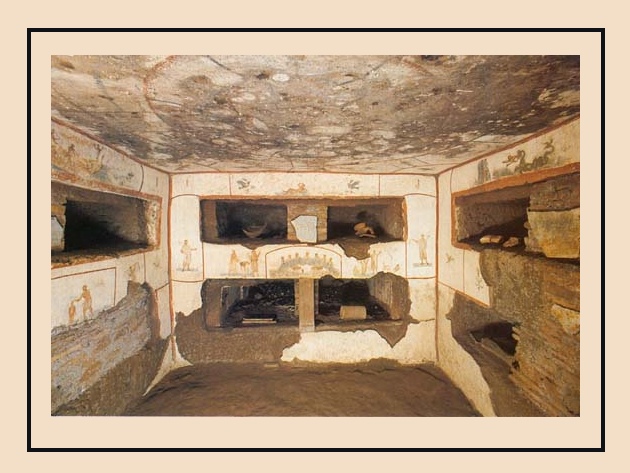 The Catacombs of San Callisto represent the oldest and best preserved cemetery core of the Via Appia; the complex owes its name to the martyr pope S. Callisto (217-222), who, before his pontificate, was appointed by pope Zefirino (199-217) to the administration of the cemetery, considered par excellence that of the Roman Church, place of burial of numerous popes and martyrs. The complex consists of cemetery areas above ground, with hypogean annexes dating back to the end of the second century. A.D., originally independent of each other and later connected to form a single, vast community catacomb network. One of the oldest and most important regions of the catacomb is that of the Popes and St. Cecilia: along a gallery in this region the cubicles called "of the Sacraments" (first decades of the III century AD) because of the paintings that allude to Baptism and to the Eucharist, preserve the paintings among the most ancient of the catacombs. Other major catacomb regions are: that of Pope S. Cornelio (251-253), who died in exile in Civitavecchia, that of Pope S. Milziade (311-314), that of the popes SS. Gaius (283-296) and Eusebius (309) and the so-called "Liberian", for the many inscriptions from the time of Pope S. Liberius (352-3 66).

Already used as a pagan funeral place, the Catacombs of San Sebastiano turned into a Christian necropolis towards the end of the second century, dedicated to the SS. Peter and Paul. Only in the fourth century the catacombs took on the current name which derives from the name of the saint who was deposed here after his death (298). The young Sebastiano had preferred to suffer the torture of arrows rather than to abjure the Christian faith, but not having died, he had challenged the emperor Diocletian as soon as he had recovered. The latter had led him to the Palatine hippodrome where he had been shot dead with his stick and his body thrown into the Cloaca Maxima. Miraculously appeared to the matron Lucina in a dream, he was mercifully collected by her in his mortal remains and transported to the catacombs taking his name. Originally the cemetery was called ad catacumbas, or "near the valley", due to the pozzolan quarries existing on the site. The toponym "catacomb" was later extended to directly indicate Christian underground cemeteries.

The visit of these catacombs includes access only to certain sectors: in the deeper region, from the cubicle of Jonah, so named for the 4th century frescoes that decorate it and that depict four scenes concerning the life of that biblical character, you get to the crypt of San Sebastiano and to the pitch where there are three pagan mausoleums, later used also by Christians.

Please note:
FFP2 masks must be worn for the visitre le mascherina FFP2