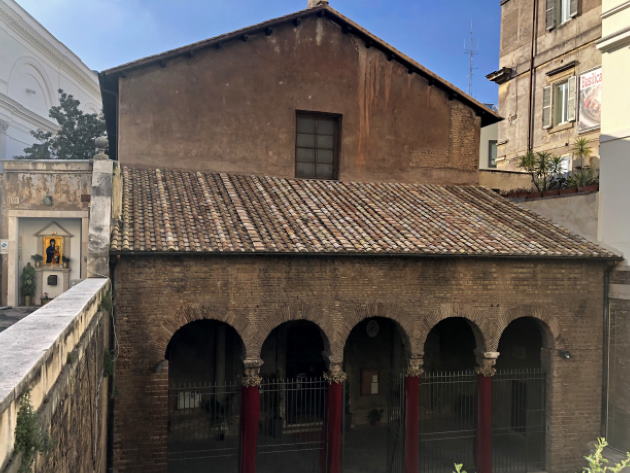 On Via Nazionale, next to Palazzo delle Esposizioni, a steep descending staircase leads to one of the oldest churches in Rome. It was in fact founded on a 4th-century oratory that, as a result of a benefaction by a lady called Vestina, was then rebuilt as a basilica with a central nave and side aisles. This was consecrated by Pope Innocent I the beginning of the following century and dedicated to St Vitalis, his wife St Valeria and his sons SS Gervase and Protase. The basilica was restored several times in the Middle ages and completely rebuilt by popes Sixtus IV (1475) and Clement VIII (1595): the church was reduced to a single-nave edifice while the ancient narthex was enclosed and converted into a vestibule. The characteristic access stairway was built in 1859 to overcome the raising of the road level following the construction of Via Nazionale. Restoration works carried out in the 1930s have finally restored the original nathex.

The façade is very simple and shows the early Christian narthex, with five arches on columns with capitals dating back to the fifth century. The beautiful portal with the shield of Pope Sixtus IV is among the noblest of the early Roman Renaissance, even if the precious 17th-century relief panels have been removed from the wooden doors and placed in a safer place. The single-nave interior shows a cycle of 17th-century paintings, completed in 1603. In particular, Andrea Commodi frescoed the apse with the Ascent to Calvary and the martyrdom of Saints Gervase and Protase. The great scenes of the martyrdom of St Vitalis on the walls of the current presbytery are by Agostino Ciampelli. Along the nave, Tarquinio Ligustri frescoed the figures of the Prophets in the upper part and the numerous martyrdom scenes, inserting them in valuable and pleasant landscapes. The altarpieces are by Giovanni Battista Fiammeri. The four altars, two on each side, come from the 5th-century church.

In the Middle Ages the church was the starting point of the “procession of widows” conceived by Pope Gregory the Great. Until the 19th century, according to the testamentary dispositions of the Roman gentleman Francesco Silla, every Friday bread was distributed free of charge to the poor of the city.