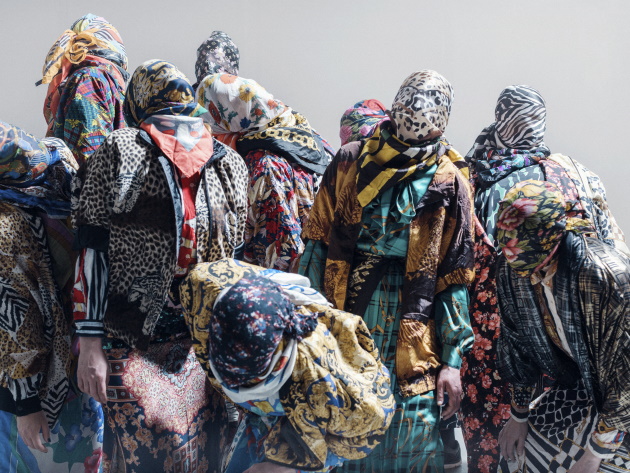 A landscape made of moving bodies, costumes, light, and sound: Oslo-based choreographer Ingri Fiksdal brings to the stage of Teatro India’s Foyer a mesmerizing performance, in which the audience is part of what is going on and shares the same space, moving between or passing by the group of performers.

With their face and body covered by several layers of colorful fabrics, making them unrecognizable and genderless, yet unequivocally human, twenty performers transport us in silence, through slow and repetitive movements intensified by a complex play of light and shadow, in the immersive experience of a psychedelic concert, even though there is no music to be heard.

The complex sample-based beats, the often obscure and abstract lyrics of psychedelic music are indeed the starting point of this choreographic project. The performance takes its title from a music track on the Madvillain album Madvillainy by Madlib and MF Doom, two key figures within the genre of psychedelic hip-hop. The song was a homage to the poem “The Shadow of Tomorrow” by Sun Ra – one of the most visionary interpreters in the jazz history, a pioneer of afro-futurism as well as a poet, composer and philosopher – with the sound of the cosmic trip from his 1974 movie “Space Is the Place” sampled in the track.