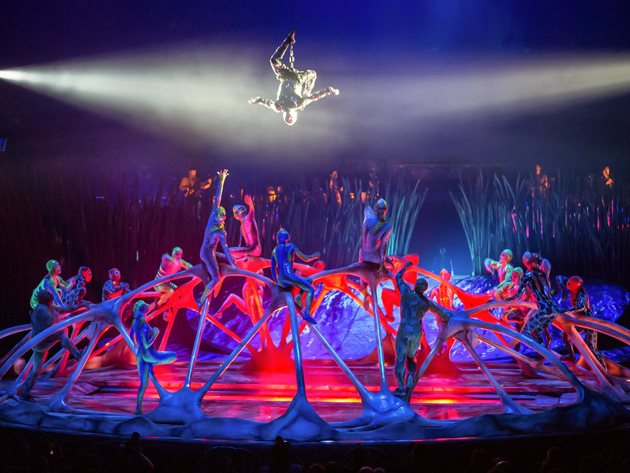 Totem is the new, unmissable show by the Cirque du Soleil; it is written and directed by the famous director Robert Lepage, on stage at the Grand Chapiteau Tor di Quinto in Rome.

This time the fantasy of the director takes us to an island in the shape of a giant tortoise, a backward journey tracing the long and adventurous path of human evolution in relation to nature, through characters telling aboriginal legends about the creation of the world.

With a cast consisting of 48 acrobats, actors, singers and musicians, Totem is an innovative, multimedia show, full of optical effects and projections that, using the most advanced technologies, in harmony with the artists' movements, produce ripples and reflections in water and flames.

Founded by Guy Laliberté in 1984 in Canada, composed initially of 20 street artists, has completely renewed the circus art and expanded itself more and more till now, up to count 1300 artists, coming from almost 50 nationalities.

Totem has already conquered more than 160 million spectators performing in 400 cities in more than 40 countries around the world; it has been represented 3 thousand times in 45 cities in the United Kingdom, the Netherlands, the United States, Australia, New Zealand, winning the Drama Desk Awards.

So let us be captured by this truly unique sensory experience.