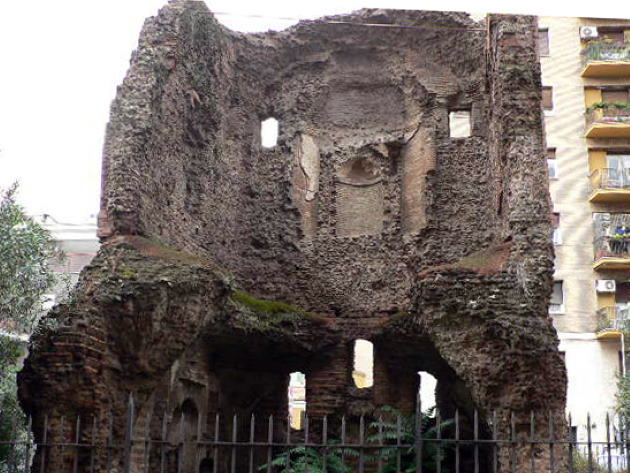 The monument is situated in the square of the same name, along Via Nomentana, nearby the church of Santa Agnese.
It dates back to the middle of the 2nd century AD and is a two-storey "temple" type building. The façade completely collapsed, while three of the sides remain. Externally, it belongs to the usual type of brick sepulchres, with panels framed by Corinthian pilasters and small rectangular windows, and an original frieze of bricks of various colours, arranged with the effect of an isodomic stony structure.

A staircase, obtained beneath the podium, led to the lower semi-underground chamber, with a white mosaic floor; on each of the walls, supporting a vaulted ceiling are two arcosolia and, above them, five niches surmounted by small splayed windows.

The upper room, on the back wall, has a large arched niche framed by two brick columns, with a curved tympanum and shell-shaped cap. The side walls have rectangular niches, surmounted by a tympanum with the sill supported by shelves.

It was also called "Devil's Chair" following the collapse of the facade, when the remains took on the appearance of a chair with armrests. In medieval times, when the monument was located far from the city and abandoned to itself, the many eerie legends were born: in fact, people began to believe that it was a demonic place, as well as the throne of Satan. The site used to be the usual refuge for homeless people and shepherds who lit fires at night, making the monument take on an even more gloomy appearance due to the play of flames and shadows. In 1300, then, some wrote their wishes on the wall, to make them come true, others scraped fragments of bricks to use in magic potions. According to legends, it seems that in a point of the "Chair", it is possible to read the word "kabala", a kind of magic formula engraved on the stones of the ruin by the alchemist Zum Thurm.

The attribution of the tomb to a certain Aelius Callistion, a "liberto" (a freed slave) of emperor Hadrian appears to be controversial even today.

Visible only from outside