The Pyramid of Caius Cestius 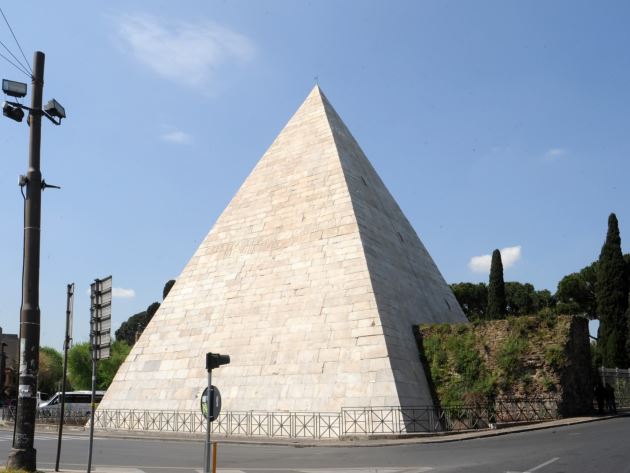 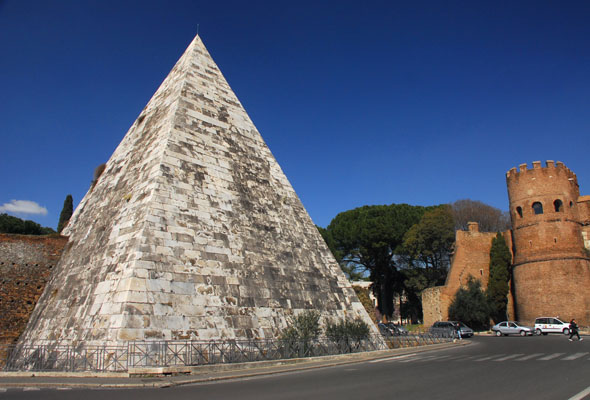 After the conquest of Egypt in 31 BC on the part of Ottaviano Augusto, following Cleopatra's death, Roman funeral construction began to be inspired by Egyptian models, giving life to a real fashion.

One of those who chose a pyramid as a tomb was Caius Cestius, a praetor, a tribune of the plebs, and a member of the Septemviri Epulones, magistrates who organized banquets in honor of the most prominent deities, as can be seen on one of the inscriptions on the facade. Another inscription tells us that the construction works had to last no more than 330 days. The family members would have lost their inheritance.

The tomb was built along Via Ostiense, between 18 and 12 BC. Four centuries later, on the initiative of the emperor Aureliano, it was incorporated into the new city wall.

The structure is 36.40 meters high and has a square base of about 30 meters per side. The external cladding is made up of Lunense marble slabs. The barrel-vaulted burial chamber is painted white, according to a panel scheme, and decorated with refined frescoes with figures of nymphs and winged Victories holding a crown and ribbon in their hands.

The first violation of the tomb probably dates back to the Middle Ages, through a tunnel dug on the northern side, which resulted in the loss of the cinerary urn and significant portions of the decoration.

The tomb was surrounded by an enclosure built with blocks of tuff and by four columns positioned at the four corners of the pyramid.

The Pyramid of Caius Cestius was not the only one in Rome. In the 1st century BC, in fact, two were placed where today the twin churches of Piazza del Popolo stand, and one was along Via della Conciliazione. It was considered the Meta Romuli. In 1499, it was demolished by Pope Alexander VI Borgia, on the occasion of the imminent Jubilee. It was in that period that the Pyramid of Cestius was mistakenly identified as the Meta Remi, the tomb of Remo, the twin brother of Romolo.

The inscription referring to Gaius Cestius Epulo took away any doubt. 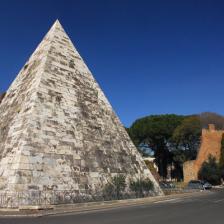