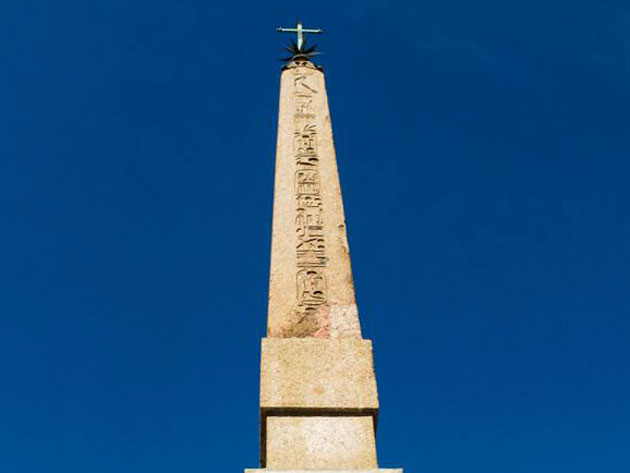 Together with the one visible today in the Villa Celimontana, it was originally erected in Heliopolis by Ramses II. Together the two obelisks were brought to Rome to decorate the temple of Isis (Iseum). It is of red granite and is about 6 and a half meters high. Its original height was perhaps approximately 1 meter greater. The inscriptions show phrases that indicate the relationship of the pharaoh with the sun god ("Excellent son of the sun god") and recall the works performed in honor of the god.

The details on the transport of the two twin obelisks to Rome are not known. This, now in front of the Pantheon, was discovered lying near the church of Santa Maria sopra Minerva, which had been erected on the ruins of the temple of Isis. Following the discovery, towards the end of the 14th century, it was moved in front of the small church of San Macuto.

It was placed there in a very rudimentary way, on four dice that supported it and without any decoration. Rome in those years, following the abandonment of the popes who had moved to Avignon, was in great misery and its population had dropped to about 25,000 inhabitants.

To give more worthy accommodation to the small obelisk, at the time of Pope Clement XI (1700-1721), various hypotheses were formulated: in the port of Ripetta, in Campo de 'Fiori, in piazza SS. Apostoli, in front of the Palazzo di S. Marco or near the Arch of Constantine. In 1711 it was erected in its present location on a pedestal decorated with a fountain with dolphins, adapting it to the sixteenth-century fountain with the masks of Giacomo della Porta. 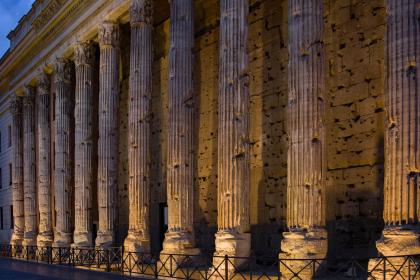