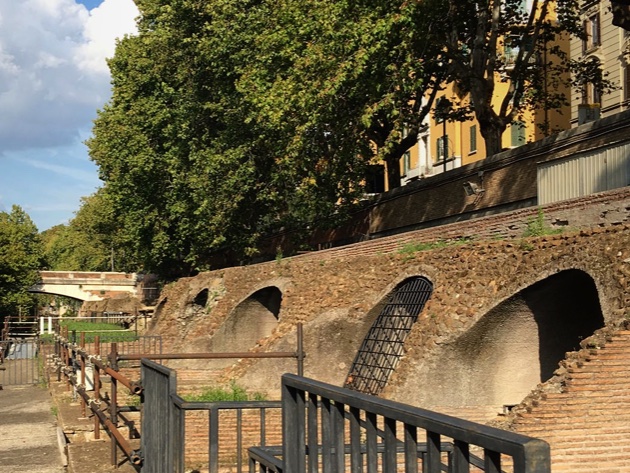 The Emporium, that is the ancient river port of Testaccio, rises along the left bank of the Tiber, partially hidden from view by the river walls and tall plane trees. Built in the 1st century AD, it represented a fundamental commercial hub for the supply of the entire city and replaced the Portus Tiberinus, previously built near the Foro Boario in the area that today corresponds to the area around Piazza Bocca della Verità.

The port of Testaccio was characterized by a long quay paved with travertine slabs, still visible today, which gives access to two rows of warehouses that overlook a cryptoporticus. The offices were located on an upper floor.

Here the goods from all over the Mediterranean arrived which, once landed in the ports of Ostia and Porto, were then sorted in the city markets: wine, wheat, garum - fish entrails sauce used as a condiment - and, above all, oil.

After a period of great commercial development at the time of the Emperor Trajan in the second century, the port was abandoned in the fourth century AD. and then buried. Used as a burial area during the Middle Ages, it was then completely forgotten.

It was only at the end of the 19th century that the traces of this ancient port were rediscovered and its history began to be reconstructed.

Can only visited during extraordinary visits