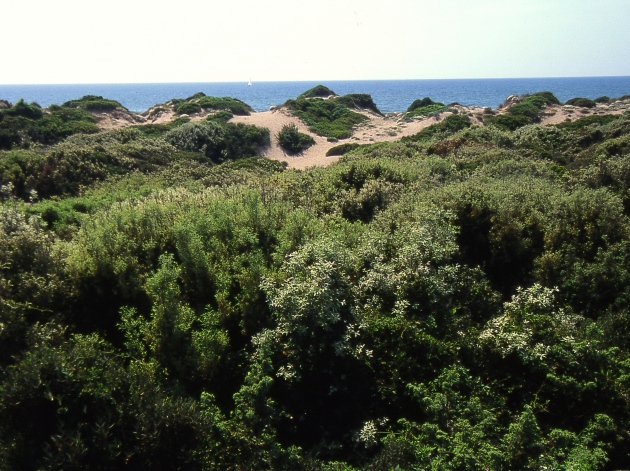 Along the Roman coast we can see the dune ecosystem, rarer and rarer along the coasts of the Italian peninsula. The dunes formed due to sand sediments, carried by the waters of the Tiber, that are distributed along the coast by the power of the sea.

The sand, blown by the wind, lands on this first layer thus creating a stabilizing effect that allows the growth of vegetation. The latter is important because it protects the coastline from marine erosion.

The dunes of Castel Porziano can be identified on the stretch of coast known as “the gates” and extend for 5 km.

The dune of Capocotta is the last strip of land of the Natural Reserve of the Roman Coast and the farthest from the mouth of the Tiber.

The whole area is designated as a Site of Community Importance and included in the Special Protection Areas. Sea daffodil, centaury, and marine chamomile, produce, in different periods of the year, a beautiful florescence; tufts of Ammophila (European beachgrass) give a characteristic touch to the environment, accompanied by the scent of juniper. The Mediterranean scrub characterizes the thickest part of the vegetation with mastic, sarsaparille, heather and buckthorn.

The dunes also house a very diverse fauna with peculiar common names including warblers, quails, blackcaps, nightingales, hoopoes, which find a shelter in the dune of Castel Porziano; here live insects such as the moth called “falena di pancrazio” and the multicolor striped caterpillar.

The environment behind the dunes is inhabited by weasels, rabbits and porcupines. Among the dunes of Capocotta, using the appropriate walkways leading to the sea, you can spot the Hermann tortoise.