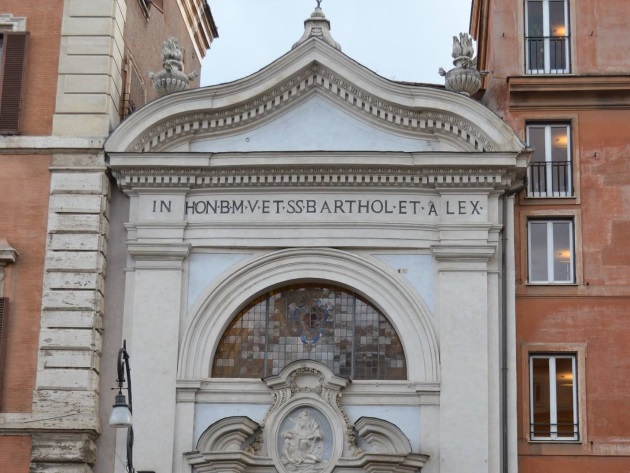 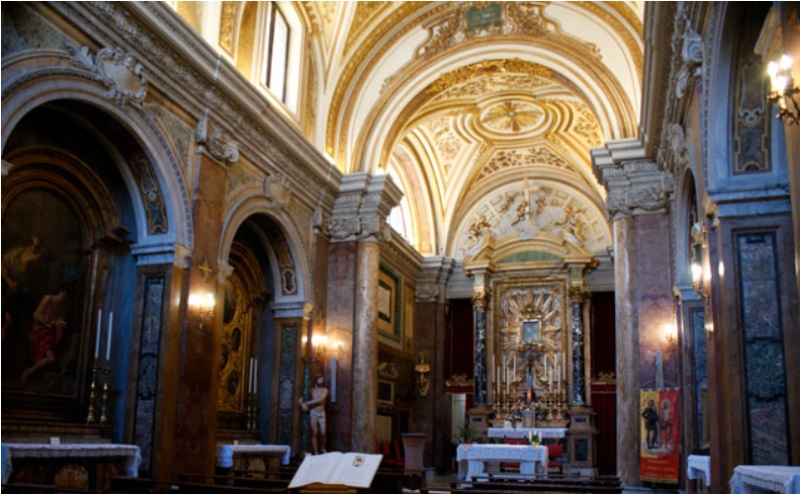 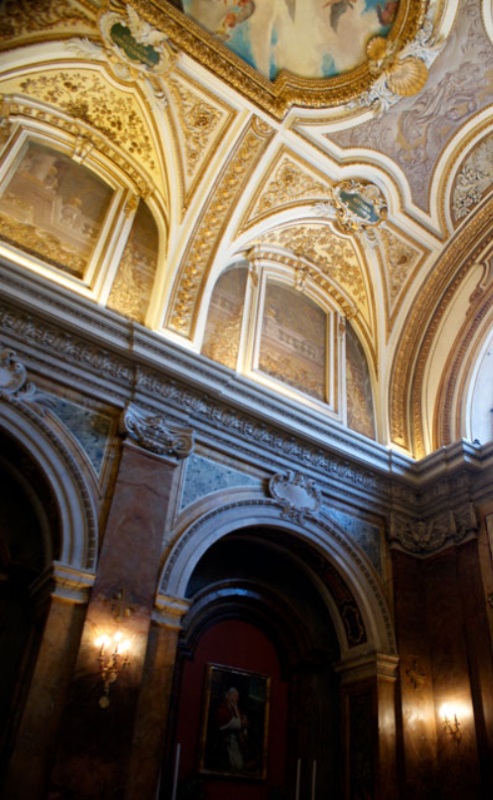 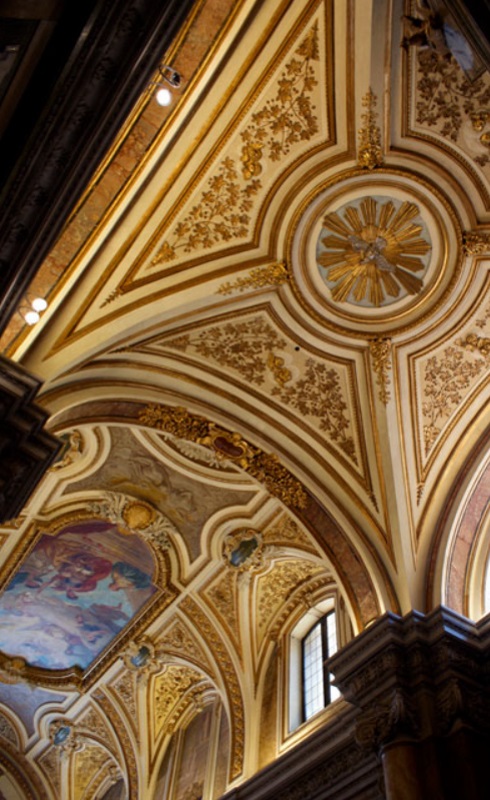 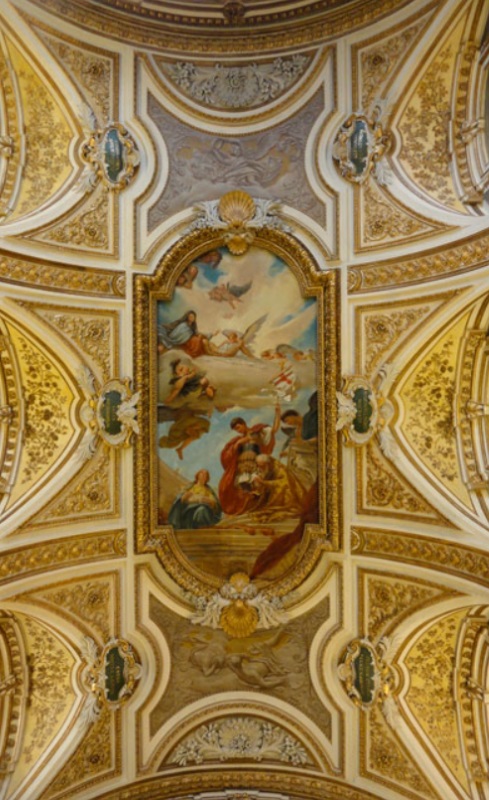 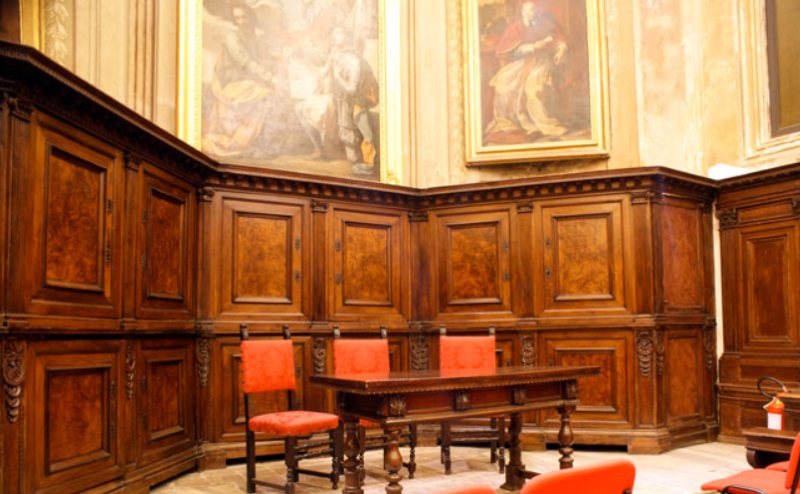 In 1500 in Rome there is a large presence of Bergamo people, a town located in Northern Italy, 60 km away from Milan: workers, artisans, wool and silk merchants, couriers, magistrates, men of arms, letters and church.

Some of them, on the impulse of Giovanni Giacomo Tasso, great-uncle of the poet Torquato, decided in 1539 to create a "Compagnia", the " Venerabile Arciconfraternita dei Santi Bartolomeo e Alessandro della Nazione Bergamasca", which had the purpose of assisting in their religious, moral and material needs the citizens of Bergamo who lived permanently in Rome, and of always keeping the love and worship of their nation alive.

Their seat was the small church of San Macuto which the Bergamo residents restored and expanded with a room for spiritual meetings - the Oratory - and a small hospital (1544).

At the beginning of the 1700s, the Jesuits put pressure on Pope Benedict XIII to have the church of San Macuto that was given to them in 1725, together with the hospital, following a special papal decree. The members of the Archconfraternity, however, did not give up easily, and thanks to their passionate resistance, they manage, at least for a few years, to remain in San Macuto. Indeed, the Jesuits pay them an expropriation allowance with which they can buy the Church of Santa Maria della Pietà in Piazza Colonna and the adjoining Ospedale dei Pazzarelli - the first hospital for mentally ill people born in the city of Rome - which even houses Torquato Tasso between the end of 1589 and the beginning of 1590.

The original church was built between 1569 and 1573 with the name of Santa Maria della Pietà, from the image above the portal. The Arciconfraternita dei Bergamaschi  named it after the Saints Bartolomeo and Alessandro.

The baroque façade of the church has a single order crowning an original triangular undulating tympanum and is the work of two Roman architects, Contini (1641-1723), a pupil of Bernini, and de Dominicis (1696-1758). The notice on the entrance portal, in Italian and in the Bergamo dialect, invites tourists and pilgrims to visit the church.

Three interventions of embellishment and restructuring of the church were carried out between 1836 and 1839 under the direction of the architect Giuseppe Valadier.

The interior has a single nave with three side chapels on each side. Among the most important works are a wooden statue of Christ at the Column of Filippo del Borgo (1569), the Madonna della Pietà, painted in oil on wood on the main altar and inspired by Guido Reni, the funeral monument of Cardinal Furietti , humanist of Bergamo's origins, and another wooden crucifix by an unknown author (about 1570).

THE ANCIENT ORATORY
The oratory, designed by the architect Gabriele Valvassori, was inaugurated In 1733. The 16th century furniture comes from that of San Macuto, which was dismantled and adapted for the occasion. The architecture of the environment is very simple, but the decorations of the walls and the vault are extremely elegant and elaborate, according to the style of the great architect Valvassori, with stucco-reliefed architectural structures, often gilded, and the splendid late 16th century boiserie. In the upper part of the walls are some canvases of different sizes depicting popes, bishops, cardinals, holy martyrs and devotees linked to the Bergamo Nation.

For the timetable of masses and visiting conditions, please contact the Arciconfraternita dei Bergamaschi in Rome. 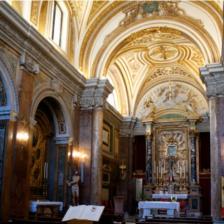 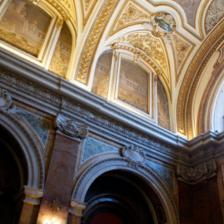 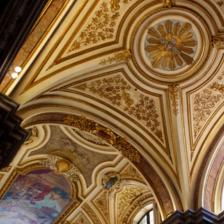 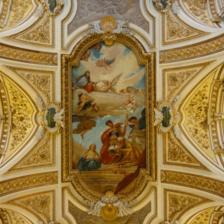 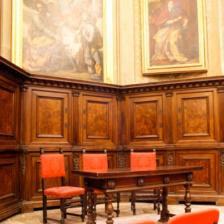