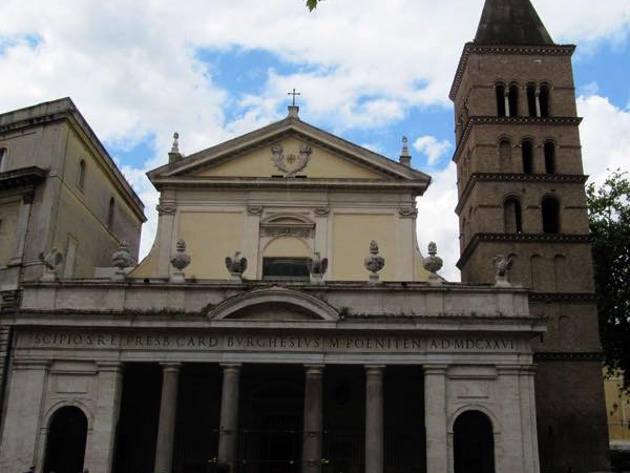 Located along viale Trastevere, in the district of the same name, San Crisogono stands in Piazza Sonnino and is one of the oldest basilicas in Rome. The church was built in the 4th century, under Pope Sylvester I, was rebuilt in the 12th century and then again in 1626, based on a project by Giovanni Battista Soria, at the behest of Cardinal Scipione Borghese

Currently the basilica has a monumental baroque façade with a tympanum, preceded by a large portico with four columns. The attic above houses eight sculptures, four vases decorated with dragons alternating with four eagles, a symbol of the Borghese family. The 12th century Romanesque bell tower is crowned by a spire.

The interior of the church, decorated by Pietro Cavallini, is divided into three naves by two orders of granite columns; the apse mosaic is to be attributed to the school of the same artist, while the floor was made in the Cosmatesque style.

Two monumental porphyry columns support a triumphal arch. The 17th century wooden coffered ceiling houses a copy of a painting by Guercino, the Glory of Saint Crisogono. Under the current church are the remains of the first, discovered in the archaeological investigations of 1907 and in subsequent excavations.