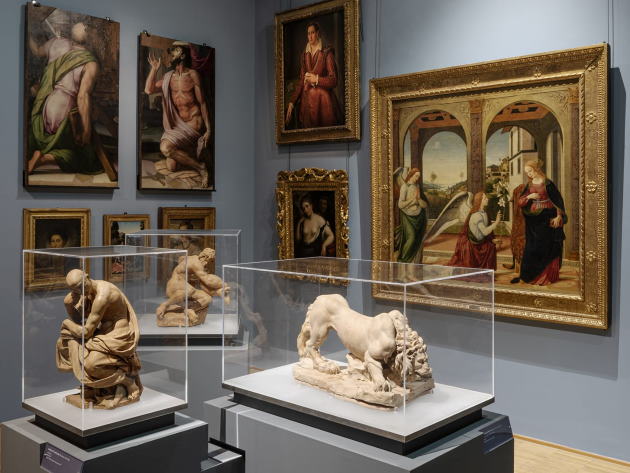 The National Academy of Saint Luca has its origin in the older University of Art and Painting of Rome following a number of transformations that took place between the late 1500s and early 1600s. The first statutes of the old University date back to 1478 and on their frontispiece St Luke is represented in the act of receiving the rules of the Art from four members of the University. In the small church of San Luca on the Esquilino hill, first seat of the University, there was an altar piece, traditionally attributed to Raphael and dedicated to the Evangelist, patron of painters. The altar piece was later moved to the church of Santi Luca e Martina at the Foro Romano, and finally to Palazzo Carpegna, where it can still be found today.

After 1634, the Architects joined the Academy with equal authority as Painters and Sculptors. From 1705 onwards, the Academy has taken an equilateral triangle composed of paintbrush, ruler and compass, as its emblem, in order to express the equal dignity and unity of the three arts: painting, sculpture and architecture, under the aegis of drawing, as underscored by the Horatian motto of “aequa potestas” that accompanies the emblem.

The academic body is made up of a total of 180 academics (90 nationals, 30 foreigners, 36 scholars, 24 “benemeriti” - well-deserving art and culture academics). The highest office of the Academy, which has always been assigned in rotation to an exponent of each of the arts, up to the statutes approved in 1812 was represented by a Principe, flanked in his institutional activity by two Consuls. The last Principe was Antonio Canova. After him, the office was changed to President.

Following its tradition, the Academy promotes cultural activities aimed at enhancing the fine arts. The Academy’s halls are used for the presentation of books and for holding conferences and conventions. The Academy focuses on young artists and scholars in particular through the distribution of scholarships and prizes, a custom already begun at the end of the 16th century. Part of the academic collections, including  paintings, sculptures and drawings made on the occasion of competitions, is exhibited in the Galleria. Other works are on display in the Academic Rooms, in the Secretariat offices, in the Conference Room, in the Academic Library, in the Sarti Library, in the Historical Archives and along the spiral ramp.

For the opening times and guidelines please check the > official website.