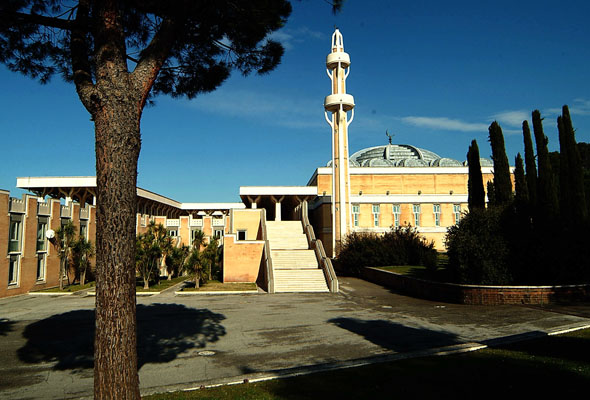 The mosque of Rome, inaugurated in 1995, stands in the northern area of ​​the city at the foot of the Parioli mountains, perfectly integrated with the surrounding greenery and is the seat of the Islamic Cultural Centre of Italy. It is the main place of worship of the Muslim community in Rome and the largest in Europe. The building covers an area of ​​approximately 30,000m².

Built to a design by the architect Paolo Portoghesi, assisted by the engineer Vittorio Gigliotti and the Iraqi architect Sami Moussawi, it represents a synthesis between Islamic, Italian architecture and the local Roman tradition. In fact, the building takes its cue from more than one mosque model: that of the "forest", characteristic of the Maghreb and of the great mosque of Cordoba, in southern Spain; that of the Ottoman mosque – exemplified by the Turkish architect Sinān – and that of the Persian mosque, characterized by the alternation between large courtyards and open spaces. To these characteristics, typical of Arab architecture, is added the use of materials of Roman architecture, such as travertine and pink terracotta.

Its interior is characterized by a large prayer hall, which brings to mind the image of a forest or an oasis, given the presence of columns with three stems that imitate the features of trees, while the use of light creates an atmosphere that invites meditation. The decorative apparatus consists of glazed ceramics of delicate colours. The frequently repeated Koranic theme is "Allah is light”.

The mosque, which is also considered the most prestigious Islamic center in Italy, is the meeting place of the faithful to pray and attend the imam's sermons on Fridays and during Ramadan, but also where weddings are celebrated according to the Muslim, conversions are accepted and relatives of Muslims deceased in Italy are assisted, both for funerals and for the repatriation of bodies.