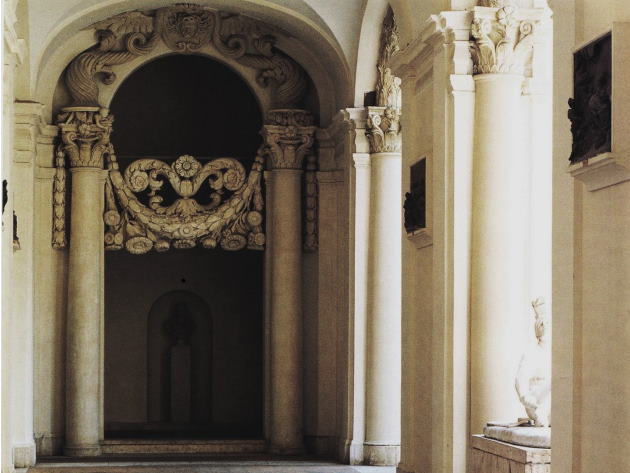 Built for the Vaini family of Imola in the early 17th century and then bought by the Carpegna family, the building owes its fame to the work of Francesco Borromini who transformed the 16th century Palazzo into what it is today.

In 1732 Emilio Orsini de’ Cavalieri Senesi inherited the palace. Between 1732 and 1736, Orsini assigned the completion of the building and its structural modifications to the architect Francesco Ferrari. After belonging first to the Patrizi Naro family and then to the Colligola Monthioni, in the second half of the 1800s to 1882 the palace was inhabited by the family of Luigi Pianciani, first mayor of Rome after Italy’s unification.

Despite the transformations made over the course of the 18th and 19th centuries, a consequence of the continuous changes of owner and use of the building, Borromini’s intervention is still recognizable in the portico on the ground floor – partially modified by Francesco Ferrari – and in the helicoidal ramp that connects the ground floor to the first and the second. To get to the ramp it is necessary to pass a portal, richly decorated with stuccos, with inverted cornucopias that frame the face of the Medusa. A laurel and flower festoon hangs from the capitals which together with the upper ornamentation draws an original oval. The stuccoes that decorated the internal entrances to the upper apartments went lost.

The functional framework the building has today is due to the radical intervention made between 1933 and 1934 under the direction of Gustavo Giovannoni and Arnaldo Foschini, with the purpose of transforming the palace into an adequate seat for the Academy of San Luca, which moved here from its previous location, demolished following the construction of Via dei Fori Imperiali.