Garbatella? It makes you feel like you are in a fairy tale | Turismo Roma
Skip to main content

Garbatella? It makes you feel like you are in a fairy tale So writes the Financial Times, the prestigious British newspaper, suggesting a visit to the historic Roman quarter to its most romantic readers. An alternative to the well-known paths that generally lead them to visit almost exclusively the historic center and think that Rome has little else to show, although full of artistic, architectural, and archaeological treasures.

But Rome is so much more than this and has much to offer if you have the curiosity not to stop at its - albeit magnificent - appearances.

And so, suggests the Financial Times, why not take a trip to the Garbatella to discover one of Rome's most evocative historic districts, among the most loved places by Romans themselves, and get lost among its squares and streets full of greenery and history?

Garbatella is, since its foundation in the 20s of the 20th century, a neighborhood on a human scale with a strong personality, where you can breathe the atmosphere of a small, timeless village built on the model of the English garden city movement.

In short, it is the ideal place for a pleasant walk to admire the eclectic mix of architectural styles, from Roman Baroque to Rationalism-Futurism, neighborhood stores, charming villas, historical spots such as the colorful buildings of the Alberghi Suburbani, the former Palladium cinema, today a theater, inspired by the ancient Roman architecture, and the extraordinary murals made by internationally renown street artists.

Finally, for a relaxing break, an aperitif, lunch or dinner with quality food, between a trendy bar, a traditional restaurant, or a more experimental cuisine, you are spoiled for choice in this place of election, which has always been the muse of great directors and artists. 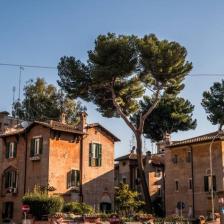