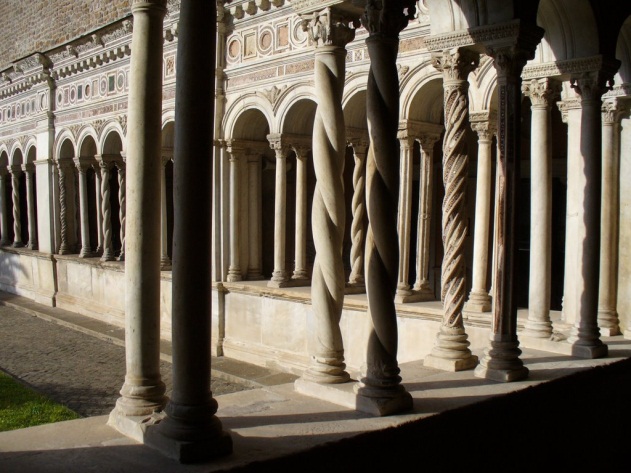 Medieval art in Rome seems suffocated by the predominance of ancient works and the sumptuousness of the Renaissance and Baroque periods. But, of course, remains of this period can be found in the urban fabric; although sometimes hidden. Today, we propose a tour to discover two cloisters; they are true architectural marvels, places of spiritual rest, as well as memories of the artistic expertise of the Medieval Roman marble-worker families.

The cloister - from the Latin claustrum, an enclosed space - is a square courtyard surrounded by porticos located inside a monastery. It has an essentially practical function: it connects the various rooms of the monastery complex. The cloister of the Basilica of St. John Lateran, a work by the Vassalletto family of Roman marble-workers, is a masterpiece of the thirteenth century. Started around 1222, it was concluded in 1232. It is the largest cloister in Rome: it has a square plan, each side measuring 36 meters.

A peculiar element of the work is the absolute lack of reuse of ancient fragments; the Vassalletto family created all the necessary elements from the beginning, inspired by Classical architecture. The pairs of columns are of different shapes: smooth, spiral, twisted, or inlaid with glittering mosaics. The capitals are also all different: inlaid leaves, with figures of people or real or imaginary animals.

A rich iconographic repertoire influenced by the Arab, Egyptian, Roman traditions as well as by Medieval beasts. The sumptuous exterior entablature, set on different levels, is the most valuable element of the cloister.

Between the sixteenth and nineteenth centuries, the remains of various demolished monuments from the interior of the Medieval basilica were transported to the cloister, as well as inscriptions and Roman era reliefs found in the area surrounding ​​the Lateran.

Let's move now to the Basilica of St. Paul Outside the Walls; luckily for our purposed on the subway line. The cloister of St. Paul, built in the second decade of the thirteenth century miraculously escaped the fire that in 1823 devastated the Basilica. It is one of the most intact testimonials that Medieval Roman has to offer.

The columns are made up of a surprising variety of shapes and colors; some, carved cream colored marble, writhe like snakes; others are so encrusted with gold and red and black tiles that it is impossible to distinguish the stone from the mosaics.

Standing out here and there are bizarre elements, such as the monsters, in the shape of the Sphinx, between columns. A long inscription, in blue letters on a gold background, runs on three sides, illustrating the wonderful work.

The garden looks well-kept; roses gathered in flower beds surround the green lawns, and laurel bushes create a note of dark green in the center. Within the cloister, architectural fragments from the ancient basilica are preserved along with inscriptions and memorial stones recovered from the nearby Christian Roman cemetery.