Tiziano. Dialogues of Nature and Love 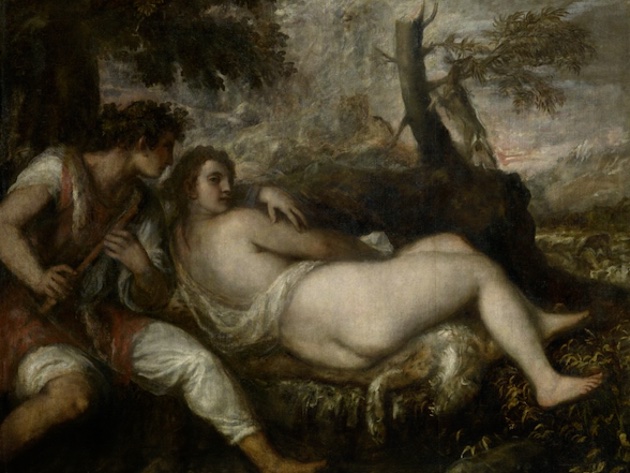 The exhibition, curated by Maria Giovanna Sarti, was born on the occasion of the loan of the Nymph and Shepherd, an autograph work created by Tiziano Vecellio (Pieve di Cadore, about 1490 - Venice, 1576), around 1565, granted by the Kunsthistorisches Museum in Vienna in the context of a cultural exchange program between the latter and the Borghese Gallery.

Thanks to this circumstance, a dialogue is created between the Vienna work and the paintings of the great Venetian master present in the Gallery, regarding some fundamental themes constantly present in his production, as a sort of fil rouge which links the works from the beginnings up to those of the last period: Nature, understood as a landscape but also a place for human actions; Love, considered in its various forms, of divine, earthly, matrimonial love, personified by Venus or a Nymph, or by a girl or a bride. Finally, Time, which, by marking the life of man, regulates it by assimilating the human life to the harmony of the Universe.

In this sense, the canvas loaned by the Viennese museum, one of the last of the master, represents a summa of Titian's art, being a loving and musical allegory of Nymph and shepherd alluding to the harmonious bond between Nature and Love, which are part of the cycle of life.

The exhibition unfolds in room XX, on the first floor of the museum, where paintings from the Venetian school and by Titian are already on display. The arrangement of Sacred Love and Profane Love and of Venus blindfolding Love - facing each other - suggested the placement of Nymph and Shepherd along the other axis, facing The Three Ages on the opposite wall, here in the replica painted by Giovanni Battista Salvi, known as Sassoferrato who, during the seventeenth century, copies (perhaps precisely for the Borghese family), a version of Titian's painting present in Rome. Nymph and shepherd in fact represents the same reflection as the painting opposite, on love, nature and time that passes and cancels everything.

As a corollary to this dialogue, visitors find Marco Basaiti's Adam and Eve, and two other paintings by Titian, Christ scourged and San Domenico, chronologically close to the later paintings of the painter present in the room. The exhibition is completed by the painting, first referring to a prototype by Veronese, but currently believed to be a late derivation from a lost Titian model, depicting Venus, Cupid and a satyr, which acts as a pendant to Venus blindfolding Love.

The exhibition is accompanied by a catalog published by Art'em, with a preface by the director of the Borghese Gallery Francesca Cappelletti, with texts by the curator Maria Giovanna Sarti.