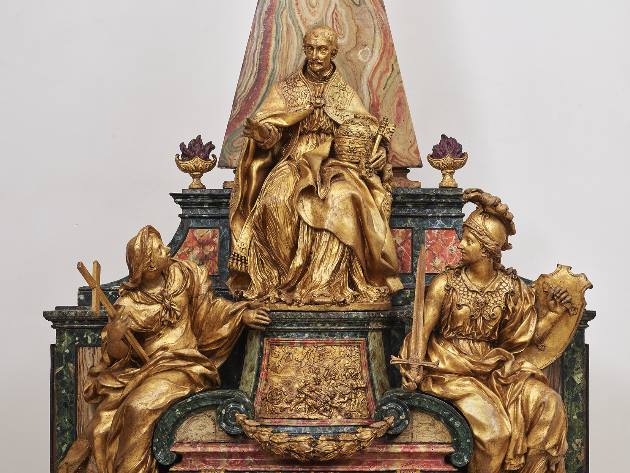 The exhibition celebrates the purchase in 2020 by the Italian State from the Odescalchi family of the large model in painted wood and gilded terracotta by Pierre -Étienne Monnot. The artist realized it for the funeral monument of Pope Innocent XI in San Pietro in Vaticano in Rome around 1695-1697.

Monnot arrived in Rome in February 1687 and presented his proposal as part of a private competition held by Prince Livio Odescalchi, the pontiff's nephew.
Shortly before modelling the sketch, unique of its kind in terms of size and execution refinement, Monnot moulded an idea in terracotta - on display - from Museo Nazionale del Bargello in Florence and restored for the occasion.

The reasons that motivated the sculptor to transform the tomb in such a radical way are related to the role of the painter Carlo Maratti, a protagonist of the late 17th-century Roman art scene, who provided new graphic designs for the monument.

Kept for at least a century in the private chapel of Palazzo Odescalchi, the model allegorically represents the temporal and spiritual virtues of Pope Benedetto Odescalchi. The pontiff sits on a throne, surrounded by the personifications of the Prayer and Fortress, the symbols of the papal religious and temporal power. It is made on a scale of 1 to 5 if compared to the marble monument inaugurated in San Pietro in 1701.

The exhibition, hosted at Gallerie Nazionali di Arte Antica - Palazzo Barberini, displays ten other splendid artworks. Among these is the series of apostles by Andrea Sacchi and Carlo Maratti for Cardinal Antonio Barberini, which testify the effect and suggestion of Maratti's works on the iconographic choices of Pierre-Étienne Monnot.

Museums and Cultural Sites are subject at the COVID containment policy.
For visiting schedules and procedures, please contact the official websites.