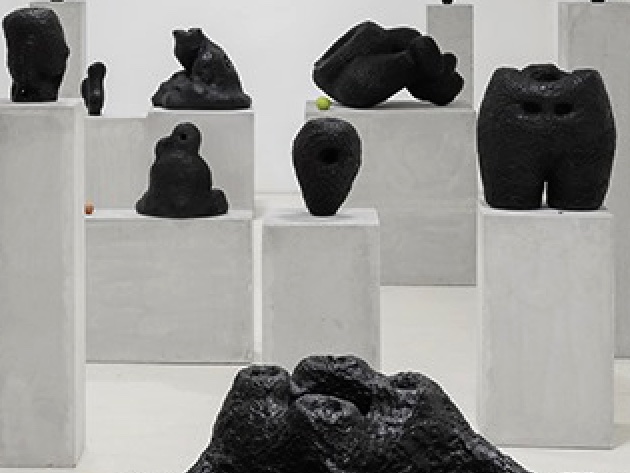 Part of the Crisalidi project, a program to promote Italian contemporary art around the world, the exhibition consists mainly of five bronze sculptures, created by Namsal Siedlecki in 2019 during some periods of residence in Kathmandu. In Nepal the artist was able to observe the lost wax casting technique, and the differences compared to the methods used in the West: instead of covering the wax model with shredded brick and plaster, the local foundries use a compound called "Mvaḥ Chā ”, a mortar that is obtained by mixing clay, cow dung and chaff (the layer that covers the rice grains) and which forms a shell so thick that it hides the original shape.

The artist has transformed these intermediate artifacts into works which, necessary for the creation of the sculptures, are however usually destroyed to complete the casting process. The result is a set of sculptures with indeterminate and unfinished masses, primitive forms that recall both Eastern religious iconography and the aesthetics of early twentieth century sculpture. The sense of spirituality that pervades the exhibition is accentuated by the presence of sweets, money, flowers, eggs and alcohol, the traditional offerings that in Nepal the faithful dedicate to the worshiped deities to avoid their anger.

In this way, the sculptures weave a dialogue between past and present, between east and west, between the millennial Nepalese culture and the language of contemporary art, highlighting how the fascination for the unknown and for the spiritual side have always accompanied the man in all ages and in all countries. Other sculptures, created during subsequent periods of residence and following relationships with other foundries, enrich the exhibition itinerary, which continue the artist's reflection on the techniques and history of Nepalese sculpture.