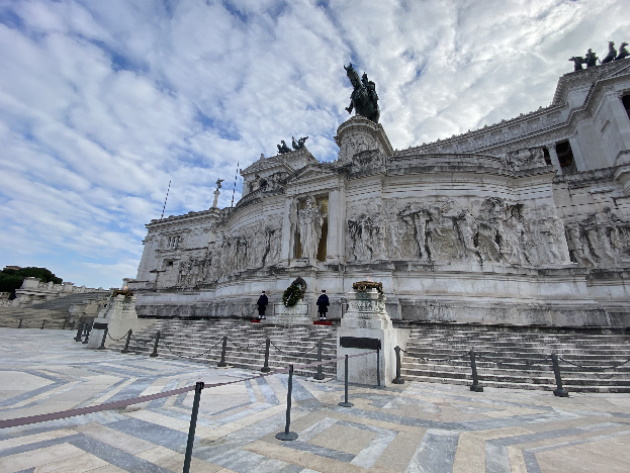 Set up inside the Shrine of the Flags of the Armed Forces, the exhibition, of a historical-cultural nature, celebrates the centenary of the transfer of the body of the Unknown Soldier inside the Monument dedicated to King Vittorio Emanuele II (November 4, 1921).

Promoted by the Ministry of Defence, the exhibition, accessible at various levels of study, is developed on a single narrative-chronological plan, with descriptive-illustrative and expositive insights that dot the path.

Digital devices to deepen the proposed themes support the exhibition.

The texts are in Italian and English to be accessible by a foreign audience.

Located in the heart of the Monument dedicated to King Vittorior Emanuele II (Vittoriano), together with the Sacellum of the Unknown Soldier and the Central Museum of the Risorgimento, the Shrine of the Flags of the Armed Forces houses the flags of the Military Corps who fought for our Country, from the Unification of Italy to the present day. Flown into the collections of Castel Sant'Angelo in the aftermath of the First World War, the flags of the various regiments dissolved at the end of the conflict moved into the Shrine. Completed by the architect Armando Brasini on the 20th anniversary of the Great War (1935). Since then, it displays the war flags of the disbanded Army, Air Force, Carabinieri, and the Armed Corps of the State. It also hosts the combat flags of the disbanded units of the Navy, the Guardia di Finanza, the State Police, and the Volunteers of Freedom Corps, as well as big-sized relics such as Luigi Rizzo's MAS 15.

When
from 28 October 2021 to 2 June 2022
Where
The Shrine of Flags and Relics of the Armed Forces
POINT (12.4842532 41.8940215)
Contacts
Email:
mostra.100militeignoto@difesa.it
Web site:
www.difesa.it/Content/Centesimo_Anniversario_Milite_Ignoto/Pagine/100-Milite-Ignoto-mostra-storico-fotografica.aspx
Timetables

Please note: The timetable may vary due to institutional needs
For updates and guidelines please check the official website