The songs of Eurasia | Turismo Roma
Skip to main content

The songs of Eurasia 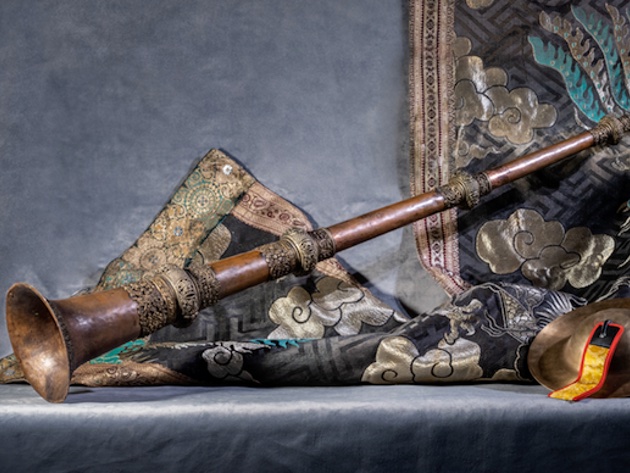 The exhibition The songs of Eurasia at the Orsini Chapel is an unusual itinerary which aims to create almost the illusion of a journey between East and West, narrating the musical, theatrical, dance, lutherie and costume traditions.

250 works including sculptures, bas-reliefs, musical instruments, costumes, masks, manuscripts were exhibited according to a travel criterion, transporting the visitor from the Pacific Ocean to the Mediterranean, especially through music. The itinerary of the exhibition opens with a Paleolithic Venus from the 2nd millennium BC, flanked by a wooden sculpture of the ancestor of the Nagas, a population of India Myanmar, followed by a bas-relief in schist of Indian Gandhara art (1st century AD) , artifacts of the Sepik culture of New Guinea and of the Japanese tradition. Artifacts from Himalayan cultures - a collection of musical-themed gilded bronze statues - and Chinese - porcelain and rare musical instruments are also exhibited; the Indochinese and Indonesian ones are instead represented by ceremonial masks and bronze statues always with a musical theme. There are also numerous testimonies of the Indian sub-continent with various elements of an ancient Hindu ritual chariot and of the cultures of Central Asia (musical instruments, ceramics and costumes) of Pakistan, Afghanistan, Iran and Turkey which reunites the Balkan world and the Mediterranean (musical instruments, ceramics, sculptures and textiles).

The real travel experience is further enriched by an App, created by the Shazarch company, allowing the visitor to see the instruments come alive and hear them play. The exhibition is promoted by the Maitreya Foundation and created with the contribution of the Italian Buddhist Union in collaboration with Cappella Orsini Lab and is curated by Roberto Lucifero, artistic director of the cultural space.

Photo credits: courtesy of The songs of Eurasia facebook page