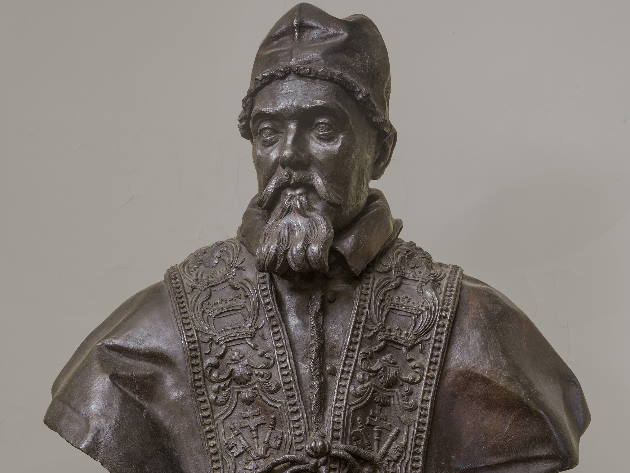 The National Galleries of Ancient Art in Palazzo Barberini host the bronze bust of Urban VIII, realized by Gian Lorenzo Bernini in 1658, on loan from Prince Corsini's collection in Florence.

For the first time in history, the exhibition presents the work in dialogue with the marble version of the Portrait of Urban VIII from around 1655, considered its primitive model. The two masterpieces are displayed in the Sala Sacchi. The room is the highest celebration of the Barberini family with the painted and sculpted portraits of Urban VIII and his nephews of Bernini, Giuliano Finelli, Carlo Maratti and Lorenzo Ottoni.

The bronze depicting the pope became part of the Corsini collection in the second half of the 19th century with Anna Barberini and Tommaso Corsini marriage in 1858. It is the symbol of the renewal of the portrait formula that Bernini conceived in the thirties of the 17th century, specifically for Urban VIII, for whom he made a many marble and bronze effigies.

The work is mentioned in a letter between the artist and Cardinal Antonio Barberini, who directly commissioned it. He also entrusted Bernini with the piece donated to Louis XIV in 1672, now at the Louvre Museum, after the Cardinal's death.

Visitors can also access the Chapel of Pietro da Cortona and, through a new web app, explore the splendid frescoed vault with the Allegory of Divine Wisdom in the Sala Sacchi.