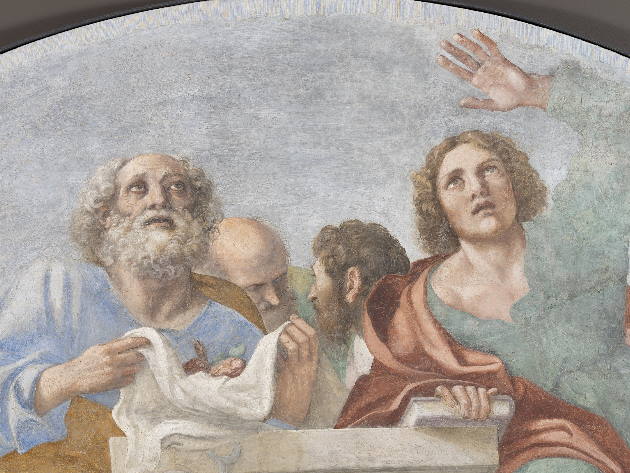 The National Galleries of Ancient Art in Palazzo Barberini present an extraordinary exhibition dedicated to the magnificent frescoes of the great 16th-century painter created for the Herrera chapel in the Church of San Giacomo degli Spagnoli in Piazza Navona.

The exhibition arrives in Rome after the two previous stages at the Prado Museum in Madrid and the Museu Nacional d'Art de Catalunya in Barcelona. It traces the chapel history, proving to be a precious opportunity for study and research on Annibale Carracci and his atelier.

Carracci was entrusted of the chapel decoration at the beginning of the 17th century by the Spanish banker Juan Enriquez de Herrera. The artist conceived a cycle of frescoes dedicated to the Franciscan saint Diego of Alcalá. He painting some of them and the admirable altarpiece today in the Church of Santa Maria in Monserrato degli Spagnoli. In 1605, Carracci was affected by a serious illness which prevented him from continuing the work, then carried on by Francesco Albani and other collaborators, including Domenichino, Giovanni Lanfranco and Sisto Badalocchio.

In 1830, following the dismantling of the little structure, the frescoes were detached, transferred to canvas and placed in the Church of Santa Maria in Monserrato degli Spagnoli, to then be divided and sent to the Prado Museum in Madrid and the Real Academia de Bellas Artes de San Jorge in Barcelona. Currently, seven fragments are in the Prado Museum and nine in the MNAC - Museu Nacional d'Art de Catalunya in Barcelona. Three other fragments, apparently deposited in the church behind Via Giulia, are still untraceable.

The exhibition path winds through the splendid Sala Marmi and Sala Paesaggi of Palazzo Barberini. On display are 16 frescoes, the altarpiece painted by Carracci, a selection of drawings, and a video produced by the Prado Museum. This latter shows the events linked to the origins of the Herrera chapel, the authors and iconography, the Church of San Giacomo degli Spagnoli, and the history and restoration of paintings. The artworks are suggestively displayed according to the original sequence in a structure in the same proportions of the ancient chapel, reconstructed inside the Sala Marmi.