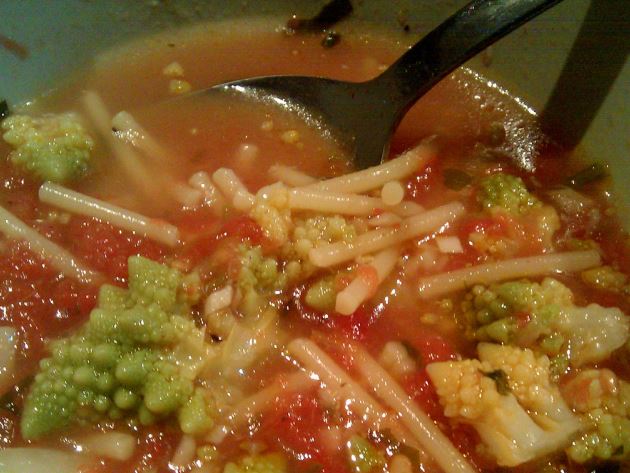 Lent is before Easter: in the Roman traditional cuisine that features poor and simple recipes, this time of the year has always been reminiscent of the old strict rules laid down by the papal authorities. Those rules provided for the exclusive use of only a few ingredients, sometimes granted with written permission. Given the season and the tradition, what better way then to speak of a true and traditional recipe of traditional Roman cuisine featuring popular, modest and economical products: Pasta with Romanesco broccoli in skate broth.

Romanesco broccoli is a pyramidal-shaped vegetable cultivated in the Roman countryside and harvested in falls and winter. The saying quotes "broccoli, hooves and preachers after Easter are not more good." Several documents bear witness to its history and its presence on the tables and in the markets of the capital. The Roman poet Gioacchino Belli, in his sonnet "Er testamento di Pasqualino" written in 1834, described the gardener as "Torzetto" referring to the torso of broccolo he cultivated and sold. Same historical importance in Roman tables is due to skate or ray. Fished for centuries on the coasts of Lazio, it is a small and cheap fish but with an intense flavor and firm flesh. It is possible fishing it all year but is very easy to find it in fish shop more frequently in winter and spring: so this is the right time to buy it. Warning: you only eat what are called "wings" of the skate, in reality the body, because the skate is a flat  fish. So what are you waiting to put you in the kitchen?

The recipe: Pasta and broccoli in skate broth

Instructions
Bake the fish in a pot of salted water and flavored with celery and onion obtaining a delicate broth. In a saucepan saute the oil, chopped garlic and desalted anchovy fillets. Add the broccoli washed and cut into florets. Season with a little salt and chilli, add the wine and deglaze, add the tomatoes into small pieces. After a while add the fish broth carefully filtered. When the broccoli are almost cooked, add the pasta and cook al dente. Let the soup rest for a few minutes, then serve sprinkled with grated pecorino romano cheese.