Spaghetti with cacio cheese and pepper 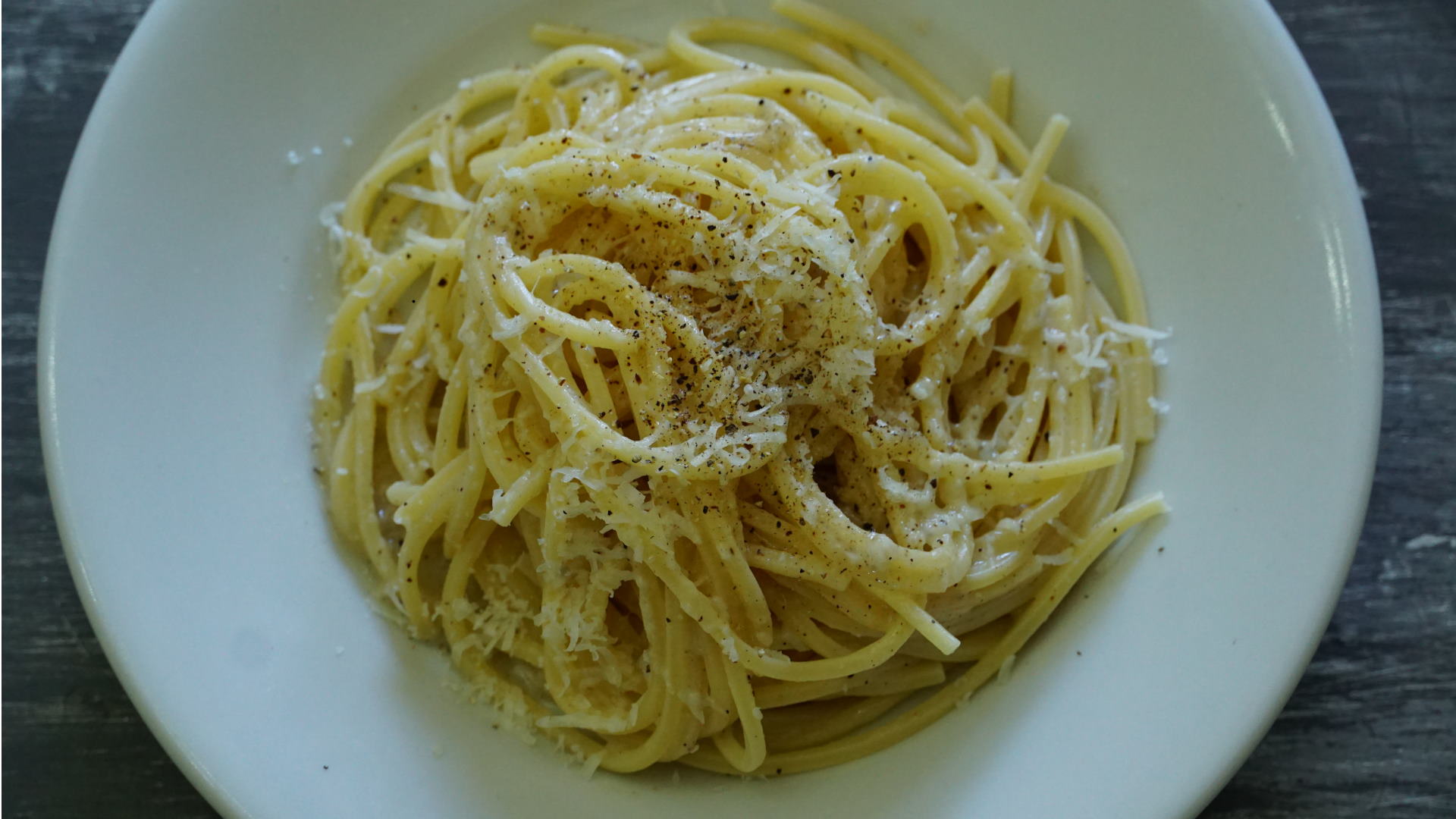 There are various strands running through and constituting the spirit of Roman cuisine. One of these is known as "burina" (a type of cheese) and the name is a reference to the rustic popular aspect of many of this style of cooking’s dishes, and to its genuine ingredients which come in large part from kitchen gardens or the pastures of the agricultural areas around Rome the city.

This is one of Rome’s most striking types of cuisine and its recipes are very successful. You only have to consider all the many and varied ways of preparing meat, including the lamb abbacchio, and the first courses, which have always been the first love of Roman people.

Who has never heard of or tried pasta recipes such as bucatini all’amatriciana, penne all’arrabbiata, or fettuccine alla romana, made with homemade pasta and therefore firm and elastic, or spaghetti alla carbonara?

In confirmation of the ancient Roman affection for its pastures which have always led to the production of top quality meat, there are still a number of excellent dairies producing cheese, some bearing the PDO label, like pecorino romano (a sheep's milk cheese) and a number of Slow Food approved products such as two cheeses with origins dating back to ancient Rome: caciofiore from the Roman countryside, and marzolina.

From the very many ancient recipes we would like to pick out one that is simple but loaded with history and takes only fifteen minutes to prepare. It is very tasty and owes its fame to the sheep's milk cheeses produced throughout Lazio: spaghetti with cacio cheese and pepper, or spaghetti a cacio e pepe. Let's go to the cooker.

How to make it
For a perfect cacio e pepe pasta you must not only season the cooked pasta with the grated cheese, but also mix a little of the water the pasta was cooked in (rich in starch) with the cheese, making it melt until it forms a kind of cream; this is the special part of this recipe. In a fair sized bowl place the pecorino romano PDO and ground black pepper. It is even better if the pepper is freshly crushed using a mortar and pestle. Cook the pasta in boiling salted water, drain when al dente using a ladle with holes in order to retain a little of the cooking water. Next place the pasta into the bowl with the cheese and pepper and immediately add a ladle of water left over from cooking the pasta. Mix quickly so that the cheese melts in the water, adding more water if necessary. Serve immediately preferably on warm plates, and dust with ground pepper.

Suitable pasta
The original recipe requires the use of spaghetti, but over the years a multitude of variations have sprung up, not least because in everyday cooking the recipe is frequently prepared with whatever type of pasta happens to be in the cupboard. So, there are versions using rigatoni, tonnarelli and even egg pasta such as tagliolini or spaghetti alla chitarra, which aid the creamy quality of the dish.

Where to eat it
In Rome there are various trattoria and restaurants in the Osterie d’Italia guide that serve this recipe. Amongst these we recommend: L’Enoteca Regionale del Lazio Palatium, in Via Frattina 94 and Flavio al Velavevodetto in Via di Monte Testaccio 97, with the version using tonnarelli. Also La Trattoria Cadorna, in Via Cadorna 12, and the Trattoria degli amici a Trastevere in Piazza Sant’Egidio 6, with the classic spaghetti version.