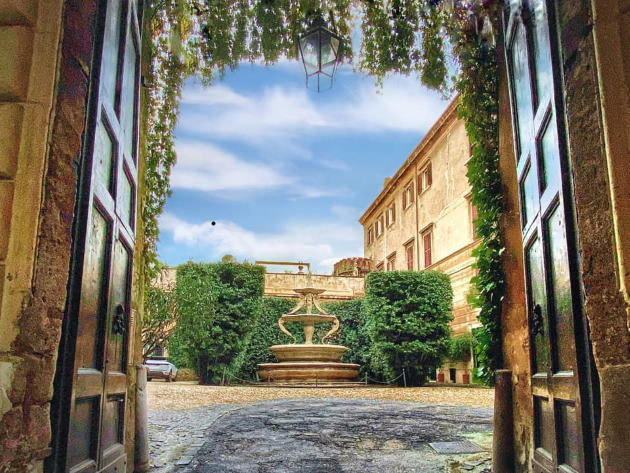 The palace is composed of different buildings taking up an entire artificial hill, which was perhaps formed on the stone materials coming from a nearby Tiber river port and which was fortified in the Middle Ages. The first known owner, around the mid-12th century, was Giovanni di Roncione or Ronzone, lord of Riario. About a century later, part of the hill was inhabited by the Stefaneschi family and a document mentions the presence of a “main tower”. The powerful Roman Orsini family settled there a few years later, controlling the entire surrounding area from there, but only in 1328 the hill became known as “Mons Ursinorum”, Orsini’s Mount.

The “Mount” was referred to by Dante in his literary masterpiece “The Divine Comedy” (Inferno, Canto XVIII) when describing the many pilgrims going to St Peter’s during the Jubilee of 1300. The current name of Monte Giordano attributed to the hill comes from Giordano Orsini, senator of Rome in 1341, or from the homonymous cardinal who died in 1438. The fort with its many defense towers was soon turned into a set of noble buildings divided among the various branches of the Orsini family: the Dukes of Bracciano, the Counts of Pitigliano, the Lords of Marino and then of Monterotondo. In 1549 the palace was inhabited by Cardinal Ippolito d’Este who used it as a place for social and cultural meetings, also hosting writer Torquato Tasso.

At the end of the 17th century, the entire complex was sold to the Roman noblemen Pietro and Antonio Gabrielli, who restructured and enlarged the complex by also purchasing the other houses around the hill, in this way creating a grand building complex. There were many illustrious personalities who frequented and lived there, including the wife of Napoleon III Empress Eugénie. The last change of ownership took place at the end of the 19th century in favor of the Taverna counts of Milan who are the current owners.

From the large vaulted entrance on Via di Monte Giordano it is possible to see the main courtyard with the beautiful fountain built in the early 17th century by Antonio Casoni and modified in the 18th century and on the side overlooking Via Panico and Via di Monte Giordano there is an imposing escarpment wall dating back to the 16th century and considered the work of Baldassarre Peruzzi. The oldest building overlooks Vicolo Domizio, while on the left are the palace of the Counts of Pitigliano and the palace of the lords of Monterotondo, with a massive 19th-century medieval style tower called Augusta in honor of the wife of the owner Placido Gabrielli. The buildings today house many different activities, from private residential apartments to banqueting halls, diplomatic residences, artistic studios and the new cultural space “Spazio Taverna”, sponsored by EIIS - European Institute for Innovation and Sustainability.