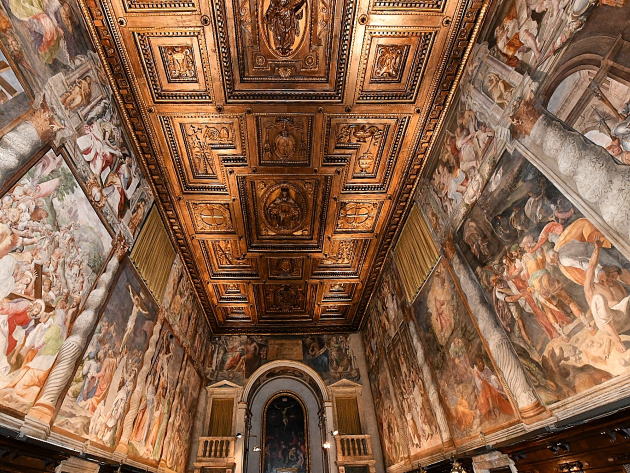 The oratory was built between 1544 and 1547 on the church of Santa Lucia Vecchia by order of the Archconfraternity of the Gonfalone, whose origins date back to the 13th century. Pope Clement IV officially recognized the Company, with the "Brief" of 1267.

The 16th-century rectangular interior is enriched with frescoes depicting the "Stories of the Passion of Christ", painted between 1569 and 1576 by artists such as Federico Zuccari, Cesare Nebbia and Livio Agresti.

The series of frescoes, which entirely decorates the walls of the Oratory, represents twelve episodes, from the entrance to Jerusalem to the Resurrection. They are painted according to the ideals of composure, nobility and profound feeling formulated by the Council of the Catholic Counter-Reformation.

Thanks to the quality of these frescoes, the Oratory is also called the "Sistine Chapel of Roman Mannerism". The roof has a wooden ceiling carved in 1568 by Ambrogio Bonazzini with depictions of the Virgin and Saints Peter and Paul.

The Oratory hosts the concerts of the Roman Polyphonic Choir.